Publishers Clearing House tries to recast its brand for millennials 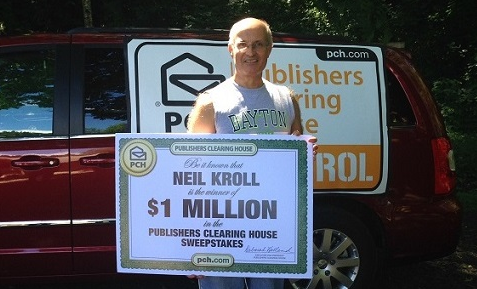 Publishers Clearing House is a brand with a troubled past. The direct-marketing, sweepstakes and online shopping company is best known for sending the “prize patrol” to surprise unsuspecting winners at their door with a novelty check, flowers and balloons.

The joke, of course, is that no one has actually ever won one of these prizes. It’s estimated that the actual chances of winning are a scant 1 in 1.2 billion (although the company claims to have paid out more than $251 million in prizes). More troubling, it has been accused over the years of misleading people with sweepstakes entries; it seems like the company is inevitably included in stories like this roundup of scams that target older people.

No wonder, then, that Publishers Clearing House is trying to recast itself as a digital entertainment company focused on apps and games for the millennial generation. To that end, it has hired Mark Cullinane, an svp at casual game company GSN, to be vp and general manager of digital at PCH; and Jason John, former vice president of marketing and strategy at Gilt Groupe, as digital CMO, earlier this year. In a tangible sign of that push, they’re rolling out Publishers Clearing House’s first Lotto app, complete with a new $1 million prize, and an accompanying TV campaign.

“Under the umbrella of chance to win, we see the ability to execute interesting and fun compelling online games, sweeps and other chances win, and shopping,” Cullinane said.

PCH Digital gets 15.6 million monthly multiplatform uniques to its network of gaming sites including PCH.com, PCHGaming.com and CandyStand.com, per comScore. But it’s challenged to increase the frequency of its visitors.

“I would love a daily PCH brand, and that’s not happening currently,” John said. “For the younger demo, I would like to increase that interaction.”

Branding experts said the lack of awareness could help the company but, they acknowledged, it still has an uphill battle to fight.

The company has been using PCH as its primary brand name, which downplays the anachronistic-sounding publisher name. Its website feels neglected, though, with an opening page featuring a cheesy enter-to-win come-on.

Connecting successfully with younger consumers is more than just about increasing its presence on digital, though. If the company wants to reach millennials, it should think about adapting its message to that generation’s desire to do good and make an impact, said Rick Roth, CEO at Roth Partners, a New York-based brand consulting firm.

“I’d be thinking about purposefulness,” Roth said. “I wouldn’t just be giving money away.” Publishers Clearing House also could do more to prove it actually does hand out money, given there’s a perception to the contrary, he said.

The company uses its social channels to warn people that you don’t need to pay to enter its sweepstakes (contrary to popular belief) and of look-alike scammers. There’s a risk that that strategy could backfire, though, Paolini warned. “You could wind up introducing people to an issue they didn’t even know about. It makes them feel defensive.”