Will ‘Shazamming’ TV ads ever catch on?

On Monday night, during the NCAA men’s basketball championship game, a Coke Zero commercial asked people to open up Shazam and turn it on while the spot is on. Once they did, an even more elaborate ad appeared on their phones with a glass filling up with the soda, and, once it’s filled, a coupon appeared for a free bottle.

It was, to be sure, a nifty trick, which Coke agency Ogilvy & Mather New York touts as the “first drinkable ad.” It also was a high-profile endorsement of Shazam, a heavily funded startup that has held the promise of making multiscreen advertising experiences possible — if pulling out phones to interact with TV commercials is something normal people will do.

Shazam, which has received about $125 million over nine funding rounds over the past 11 years, says it has more than 100 million monthly active users. Founded as a music-discovery and tagging app, it ramped up its ad efforts in 2011. By the Super Bowl of 2012, almost half of the ads during the Big Game featured Shazam, to enter viewers into a contest to win a Camry, or unlock an extra video featuring an “X Factor” contestant for Pepsi. Two of Shazam’s founders were even featured in the Best Buy commercial honoring entrepreneurs.

Jamie Gutfruend, CMO at Deep Focus, said that Shazam’s strength is that it occupies a niche place inside “real” real-time engagement. “Seventy-five percent of consumers say brands don’t respond fast enough to what’s happening,” she said. “You can tweet and share, but now consumers want to get something back.” Gutfruend said that “she doesn’t know” if Shazam is the solution for that, but at this time, it’s the only possible option for brands looking to get there.

“Tagging” an ad to unlock content is one part of Shazam’s ad strategy. The other one is the core music side where brands can buy ads when users tag songs. But it’s the former that hasn’t managed to take off.

Media buyers say the high barrier to entry is one of its biggest problems. Steve Carbone, Mediacom’s managing director and head of digital and analytics, said that buyers were excited about Shazam a couple years ago because it promised a seamless television-mobile interaction. “But the tech has evolved,” he said. “And the user experience of pulling out the phone, pulling up the app and Shazamming all in 20 or 30 seconds is just problematic.” 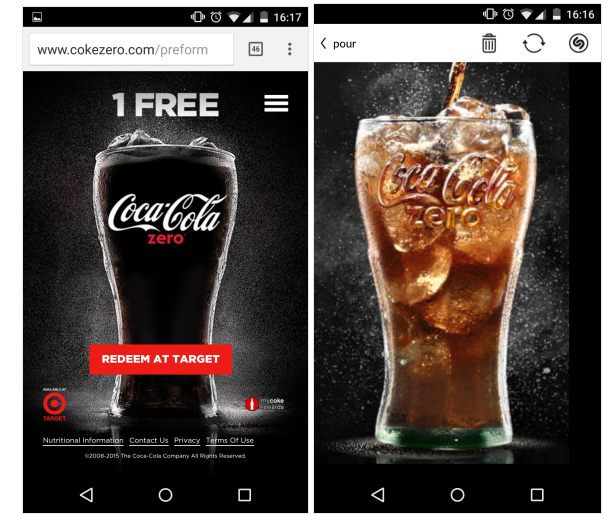 Another buyer said that other apps, like Tinder, are a much sexier and edgier option. The company charges on a CPM basis or works with creative agencies for a “platform” fee. It said prices range from the low five figures to mid-six figures — cheap compared to most other platforms.

One possible savior for Shazam is exactly what Coke is doing: the direct marketing/incentive model. Other brands like Progressive Insurance, a big direct-response marketer, has also used Shazam to great results, said Peter Szabo, head of music and ad sales at Shazam. He noted that direct response is something the company has previously shied away from but is now embracing it.

Carbone said that the offer or coupon hook may be one way to get people to use Shazam — but the user-experience problem still remains. Szabo said the Coke ad formed better than than most campaigns in recent memory.