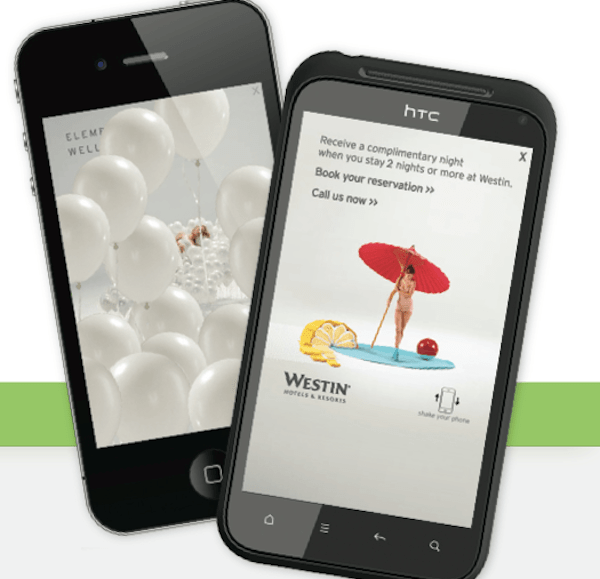 We’re inviting a member of the digital media community to assess digital campaigns selected by our staff each week and weigh in on what was done well and what could have been done better. Jeff Hasen, chief marketing officer of mobile marketing provider Hipcricket, offers his take in our second installment. If you’re interested in contributing to this, please contact me.

A shakeable ad unit was launched. The creative used images from Westin’s “Elements of Well Being” campaign that demonstrated the hotel’s ability to better understand human needs and engineer a hotel experience ‘For a Better You.’ It featured the Westin’s SuperFoodsRx Menu, Heavenly Bed and Westin Resorts. The unit put consumers in control of the various images and allowed them to change the creative displayed by physically shaking their phone.

Another creative unit featured a screen full of balloons, which users could “pop” by touching. When every balloon was popped, an image was revealed of a woman lying on a bed of balloons, symbolic of how Westin has engineered a good night’s sleep through the Heavenly Bed. The units resolved with a complimentary night oﬀer which users could click to call Westin reservations directly or book via a mobile landing page.

Assessment: Mobile display advertising makes sense if the target is a frequent traveler who most likely is carrying a smartphone. The shakeable component is a gimmick that I’d prefer seen left out. As a too-often business traveler, I do enough shaking with the necessary amount of coffee to jolt awake the system, the turbulence that rattles the nerves, and the worries about the 25-minute layover. As to other elements, I’m not sure what to make of the woman lying on balloons image. Provocative, sure, but unconvincing that the bed is made for the best night of sleep imaginable. Plus, the payoff of a free night surely pleases many, but I bet an upgrade offer would be more appealing to the business traveler who undoubtedly is on an expense account. — JH

Activision ran mobile media ahead of the game release. The campaign featured rich-media creative that was targeted to highly male environments and included a video trailer that showed highlights of the new game and an exclusive ad unit that enabled click-to-store functionality.

The campaign leveraged mobile commerce to allow consumers to pre-order the game from Amazon.com directly on their mobile device. The creative also helped drive in-store traffic by featuring a store locator that enabled consumers to find the nearest location where they could pre-order.

The campaign included an expandable banner that allowed users to tweet to the official Call of Duty handle directly from within the creative. Users could also share the rich-media trailer via Facebook.

Assessment: For such hot game titles, there is another kind of modern warfare — the kind between the online seller and the brick-and-mortar retailer. Activision wisely gave the mobile user choice although I’m not sure why someone would travel to a store for a pre-order when he or she could accomplish the same activity from wherever they are. The tie-in of social and mobile is a winner because it easily enabled the mobile subscriber to build buzz for the game. Missing was a check-in component that might have created a Call of Duty community that Activision could cultivate. — JH