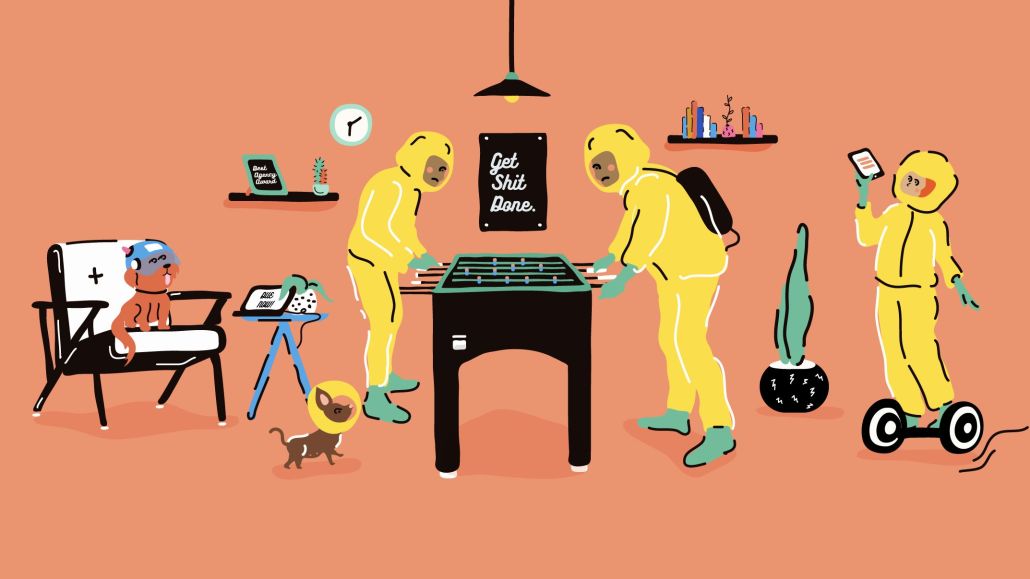 The pandemic has made the concept of the home office the norm for many of us — but in the not-too-distant future, the office as home could become a new reality.

The idea comes from the rise of modern, mixed-use buildings that include both office and residential spaces, leading some companies and building management firms to explore a sort of melding of work and home digs for employees.

It comes at a time of dwindling demand for commercial real estate, as remote work has taken off and as developers scramble to find innovative ideas to fill those giant spaces.

It also coincides with employee apathy about the eventual return to the office. A study by the real estate firm Clever found that just 20% of workers in the U.S. feel safe working in an office. Most said they fear for their health and their family’s health if they returned to an office.

The San Francisco-based architecture firm Gensler is a leader in the hybrid home-work design, employing it for recent projects like West Edge in Los Angeles and 6 X Guadalupe in Austin. Brooks Howell, Gensler’s global residential practice area principal, thinks it’s an idea whose time has come.

“If I’m a company and I’m going to build a 400,000-square-foot office space with the typical office configuration — offices, conference rooms — now I’m realizing that if I build 200,000 or 300,000-square-feet of apartments to go with that, those units become work-from-home offices of sorts,” he said. “Then you can be in the collaboration space when needed and in your private office the rest of the time.”

Residential space as a so-called amenity started with Silicon Valley companies to address the high cost of living in the Bay Area. Now, it is being marketed as the latest concept as companies prepare to return to the office in a post-pandemic world.

It is being played up as a benefit for employees because not only is their rent being subsidized by their employer, but the daily commute becomes a thing of the past.

The upside for companies having their people close by goes without saying. “We’re not all going to be working from home for the rest of our lives, and the office is not going to die,” said Howell.

Besides the developments in L.A. and Texas, another company that’s embraced the concept is Franklin Tower in downtown Philadelphia. Gregory Webster, COO of PMC Property Group Apartments, which owns the building, explained that the interior space on every floor without windows (therefore unusable as apartments) were converted into features like co-working space, study pods and storage areas — in addition to gyms, yoga studios and community kitchens — for corporate tenants. In addition, it added a bi-level addition to the rooftop featuring a lounge and fitness facility.

Kevin Miller, cofounder and CEO of the organic search firm GR0, likes the concept because of its social possibilities. “If employees design their homes to be adjacent or combined with their offices, they can start to view their coworkers as friends and even family,” he said. “The most successful, productive businesses always seem to have teams with close ties and deep connections with each other.”

Whether the idea will have legs as companies look at their options for evolving the workplace remains to be seen. But one thing has become clear: the workplace of the future will not look like it did pre-pandemic.

The accounting firm PwC, in its recent U.S. Remote Work Survey, reported that despite the rise of remote working, bosses indicate that the physical office is here to stay, even as its role will change. Less than one in five executives said they want to return to the office as it was before the pandemic, and just 13% indicated that they were prepared to let go of the office for good. Meanwhile, 87% of employees said the office is important for collaborating with team members and building relationships.

Tellingly, 87% of executives expect to make changes to their real estate strategies over the next year. “Companies are planning to reinvest the remote work dividend in new ways in order to create a special experience in the office,” according to PwC.