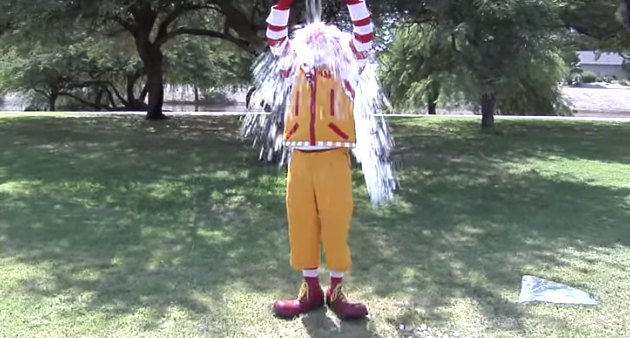 Mark Zuckerberg has done it. Bill Gates too. And Martha Stewart. And Jimmy Fallon. And your cousin, probably. So it was only a matter of time before brands decided that they, too, wanted to douse themselves with a bucket of ice-cold water to raise awareness of Lou Gehrig’s  Disease.

The so-called Ice Bucket Challenge campaign asks you to dump a bucket of ice water over yourself and nominate three friends. They, in turn, have to either take on the challenge or donate to the Amyotrophic Lateral Sclerosis Association (or both). It’s a case study in viral marketing success, so much so that it has attracted a small but vocal band of detractors. They complain that in many cases, those dumping water on their heads do it for the attention, not for the cause, and those taking on the challenge are de facto not donating.

Be that as it may, the challenge has done a lot of good: The ALSA told the New York Times on Sunday that it had raised $13.3 million since July 29, compared to $1.2 million in the same period last year.

The campaign reached peak frenzy last week, so it’s worth asking whether it’s a bit late for brands to get in on the action now.

Coke’s Wendy Clark accepted the challenge — and made sure there was plenty of the brand visible, from the Polar Bear to a Coke-branded towel. The video, for some reason, is unlisted, and has gotten 3,633 views since it went up Aug. 14.

She, in turn, called out General Mills CMO Mark Addicks (and instructed him to make sure the Cheerios’ Honey Bee was present); Target CMO Jeff Jones and the Bullseye dog; Allstate’s Lisa Cochrane and the Mayhem guy; and Mondelez’s Dana Anderson along with the Milk-Bite character.

Ronald McDonald also took on the challenge but neglected to actually say anything about donating money. He has gotten 13,400 views on YouTube since Aug. 15.

Target’s Jones obediently took on Clark’s challenge. Notice how he emphasizes “of Coca-Cola” when he refers to Wendy.

Brett Favre did it and plugged Sqor, the new social network that connects pro athletes and fans. (He’s on the board.)

Starbucks’ Howard Schultz was next, using a Starbucks-branded Camro. He has gotten over 3,600 likes and about 1,300 shares on Facebook.

Virgin did it, via Richard Branson, who challenges the “60,000 people who work for Virgin.”

Col. Sanders gets in on it, because KFC “knows a thing or two about buckets,” and pledges $100 for everyone who takes on the challenge using a KFC bucket. Shark, jumped. He nominated Chick-fil-A, Wendy’s and Burger King. (They seem to be otherwise occupied, so far.) It wasn’t a very popular tweet, getting about 137 retweets and about as many favorites.

Chili’s, meanwhile, almost gets away with this serious cop-out. It only got 29 retweets.