What brands can learn from the three-day #DeleteUber outrage cycle

The outrage cycle, a perennial  feature of social media, is picking up steam as brands are swept up in the swirl of societal discontent. Just ask Uber.

Customer frustration with Uber peaked over the weekend after the ride-sharing company appeared to try to profit off a taxi strike. Following protests out all over the country regarding President Donald Trump’s immigration ban, the New York Taxi Workers Alliance announced that they would not be driving at John F. Kennedy International Airport for an hour out of solidarity. About 30 minutes later, Uber decided to eliminate surge pricing at JFK and tweeted about it — a move many viewed as a way for the company to capitalize on the taxi strike. Within a few hours, the hashtag #DeleteUber gathered steam and people started deleting the app off their phones. Hundreds of users began tweeting screenshots of their deleted Uber accounts.

“Today’s social media landscape encourages immediacy and knee-jerk reactions from brands. They know how to react quickly, but they should learn how to think first,” said Robert Passikoff, founder and president of brand and research consultancy Brand Keys. “Uber went way overboard. They will ultimately regret this.”

Uber CEO Travis Kalanick released a statement on his opposition to the immigration ban. But even as he spoke out against Friday’s executive order, he defended his position on Trump’s advisory panel — which a lot of Uber users still found unethical. When even that didn’t help, on Sunday, Kalanick vowed to set up a $3 million legal defense fund for affected drivers, in addition to other promises.

“With the frequency with which brands find themselves to be the target of social media outrage, they have to have established assembly lines of response plans,” said Andrew Gilman, chief executive of the crisis communications firm CommCore Consulting Group. “But they must develop their crap detectors. Not everything is worth responding to. And it’s tiring.”

For one, it often ends up backfiring. Uber may have meant well, and might have been trying to offer people alternatives for their commutes, but its actions seemed cynical given the timing of the strike. Uber’s gaffe was further amplified when contrasted with the powerful statements made by other brands in response to the ban, including Starbucks, Airbnb and rival Lyft, which announced that it was donating $1 million to the American Civil Liberties Union.

Most marketing community management teams have established protocols on how to respond to negative chatter online. But 99 percent of the time, there is no need to respond at all, said Stephanie Goldman, director of community management at Laundry Service. Things may seem more widespread than they actually are, and most times, outrage doesn’t last and fizzles out.

A lot of this may have to do with the natural life cycle of outrage and boycott hashtags online, said Jonathan Cohen, principal brand analyst at Amobee. On day one, a hashtag generated by something that happened in the news starts, usually organically appearing on Twitter. By day two, there is peak activity around the hashtag as a larger audience becomes aware of the controversy. And by day three, the conversation around that boycott hashtag significantly dies down. In other words, a typical Twitter outrage life cycle usually has a lifespan of no more than a couple of days, hashtags and all.

The conversation around #DeleteUber has already significantly dropped in comparison to the weekend. The hashtag picked up on Saturday, Jan. 28, peaked on Sunday, Jan. 29, with 126,700 tweets, and then considerably fell on Monday, Jan. 30 to 45,200 tweets, according to Amobee. 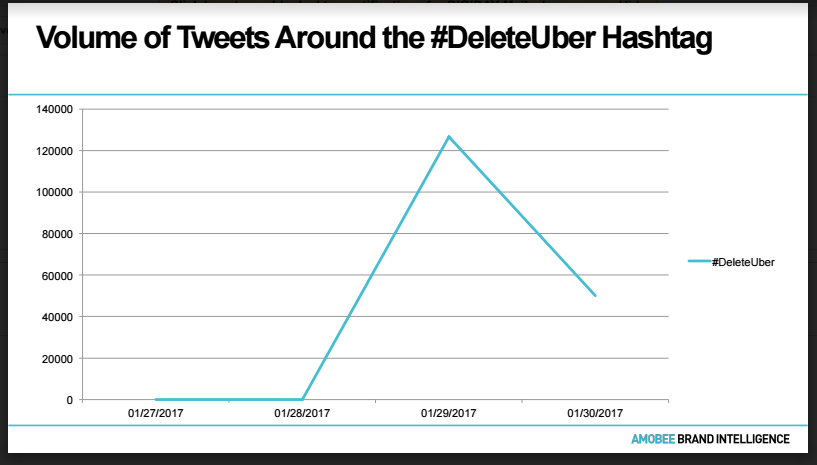 So brands that find themselves caught in the social media crossfire would do well to exercise restraint. Uber is now on the offensive and is apparently targeting people interested in the American Civil Liberties Union on Facebook.

“The best response,” said Passikoff, “as cliched as it is, is often the ‘No comment.’”