Benefit Cosmetics has emerged as a beloved beauty brand among women around the world since being founded in 1976, with a presence across 43 countries, both in major retail stores as well as in boutiques of its own. And it is now bolstering its brand further with a robust digital strategy.

Using a quirky, feel-good tone, the brand has been able to amass a combined 4 million followers on its social platforms including Facebook, Twitter and Instagram, among others. It is a source of constant entertainment to its fans not only because of the irreverent tone behind the posts, but also because they are very visually and aesthetically appealing — often doused in pink.

“Digital for us is central to building our brand awareness — it’s where our consumer spends most of her time,” said Claudia Allwood, Benefit U.S.’s director of digital marketing. “She’s a digital native and we want to be where she is and build authenticity as a trusted brand that entertains and educates at the right time.”

Here, then, is Benefit’s guide to building a beauty brand in digital.

Have a cheeky tone
Benefit’s tagline — “Laughter is the best cosmetic” — is the philosophy underlying everything that it does digitally and socially. The brand digital footprint is marked by a witty, tongue-in-cheek tone and campaigns that make fans laugh.

“We try to be a different voice of beauty in the social media and digital space, by being bold and girly and really driving our brand message,”  Allwood said. “We are very approachable, it’s like we’re communicating with our friends.”

Benefit’s product packaging is also a reflection of its spiritedness. All of its products have quirky names. Some of its best sellers include the foundation lines “Dr. Feelgood” and “Hello Flawless,” and a mascara line called “The’re Real!”

Build an army of fans
Benefit not only makes its fans laugh, but it also makes them feel like they are a part of a community. It has coined a special name for its legion of fans — “benebabes” — who come to the brand’s various platforms for its frequent beauty tips and humorous takes on trending topics.

“There’s a lot of word play, there’s a lot of humor and inside jokes,” Allwood said. “We definitely talk to our consumers in the language she’s using — whether it’s what she’s texting to her girlfriend or captioning her Instagram photos.”

Have a dedicated in-house social team
A five person in-house social team, led by Allwood and including a video producer and graphic designer, creates the brand’s social and digital content, pushing it out across its own website as well as Facebook, Twitter, Instagram and Pinterest. It has worked with influencers like Viner Brittany Furlan and even pulled off viral outdoor stunts like digital kiosks in airports across the world. Called “Glam Up & Away,” these kiosks were designed as vintage pink beauty buses where travelers could pick up Benefit’s best-selling cosmetics like the “Benetint liquid blush” and the “POREfessional primer.” A touchscreen interface also allowed users to also browse through beauty tips and tricks. 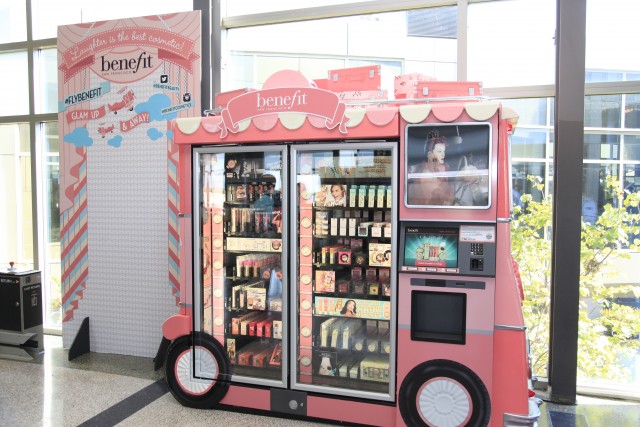 “There are so many little nuances of our brand DNA that it helps to organize resources in-house,” said Allwood. “We’re always observing, trying and testing the latest platforms, trying to predict the next big thing.”

Promote positive body image
Benefit treads carefully on divisive topics and is selective about the conversations it enter into on social media. Benefit did, for example, celebrate International Women’s Day last month, quoting Elenaor Roosevelt and asking “benebabes” to tag the powerful women in their lives.

Its campaigns also try and promote the same message, solving beauty dilemmas while greeting women across the board. The #BeautyBoost campaign, for instance kicked off in January 2013 as an “Anti-New Year” initiative against the negativity most women feel while trying to be “new” versions of themselves in the New Year.  Taking a page out of Dove’s book, Benefit asked it users to tweet the hashtag #beautyboost in return for a custom compliment.

“Social media is the perfect opportunity for a brand to express its voice, provided it has a voice,” said Sucharita Mulpuru, retail analyst at Forrester. “It is a no-brainer for cosmetic brands in particular to be active on social media because their consumers tend to be more active.”