BBH’s Side of the Story on Homeless Hotspots 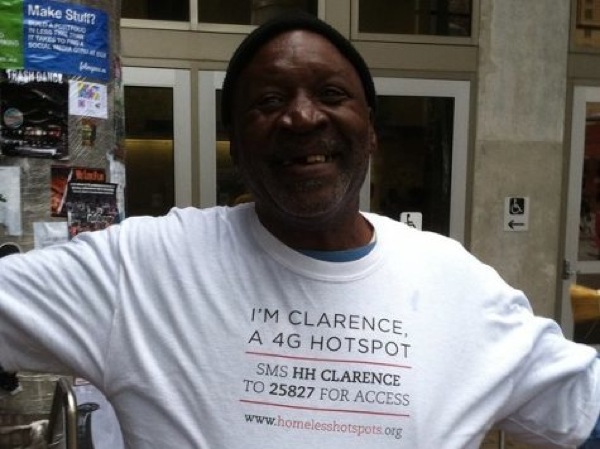 Amid all of the South By Southwest coverage, you have surely heard the buzz, both positive and negative, about Homeless Hotspots. For protagonists, the initiative by agency BBH is clever marketing and packs a powerful social message. Critics sees yet another crass, tone-deaf marketing effort that’s more about the marketer than the message.

The experiment involved having homeless people in Austin carry around special 4G wireless equipment that made them into mobile hotspots. For as large or small a donation as you wanted to give (the suggestion amount was $2 for 15 minutes), you could have WiFi access and help someone in need. Participants in Homeless Hotspots were from Front Steps Shelter and were required to wear T-shirts identifying themselves as “homeless hotspots.” Many objected to this, and the project in general as objectifying and exploiting homeless people and for being a kind of underhanded way of getting attention during the craziness that is SXSW.

Saneel Radia, head of innovation and BBH Labs, thinks critics have it wrong and the effort is a great example of using technology in a smart way to empower an ignored segment of society.

Can you tell me a about how the idea for Homeless Hotspots came about?
We were basically talking about SXSW, and one of the things that came up was the prominent homeless population there. Every year you can see that contrast between the population around where the conference is held and the conference attendees. So we started researching ways that we could help the homeless there, and one of the things that came up was the street newspaper. We looked into why were these papers so well praised by organizations, and it seems that it has a lot to do with the social dynamic, the engagement: giving them a change to connect to others. We thought this would be a great thing to bring to SXSW.

How did you choose the participants? How did they feel about the project?
When we talked to Front Steps Shelter, the case managers there presented the idea to the people there, and they seemed really interested in it. The case managers helped choose people at the shelter who are transitioning into finding employment, people who have started getting part-time work. There was very strong interest by participants. As far as a screening process, there was no screening process really. We just gave them a questionnaire. The only thing we screened for when it came to police records was violence-related crimes. Also, because the shelter population was mostly men, we made an effort to get some female participants. Financially we could only take the first 13 participants, so we took the first 13 who signed up.

How do you feel about some of the controversy that has arisen about HH and the objectification of homeless people?
We are by no means dismissive of the critiques of the program. We have listened. The good thing is that this was built with a bunch of experts in the first place. When we announced the plan, Mark Horvath (he founded Invisible People) ended up loving the idea and helped us figure out some of the mechanics of the project. There’s been a lot of early criticism based on misinformation. Especially by ReadWriteWeb.* But lo and behold, other homeless advocates have validated the thinking behind our program. We are glad to at least have started a conversation about an important issue and raised awareness about a population that is often treated as invisible.

*Radia later noted that the RWW article had been amended from its original, harsher version and that the author also apologized via Twitter.

Would you say it was a success at SXSW?
Well, according to Front Steps Shelter, it was wildy successful. Just look at what they are saying on their Facebook page. It will be successful when other street newspapers use this model or at least take something from this. That to me is the ultimate success. What’s been quite positive about the media attention is the number of street newspapers we are in touch with around the world. We are listening to all of their input, and now we begin the process of figuring where this goes from here.

Does BBH have plans to continue Homeless Hotspots in Austin and even in other cities?
We need to find the right partner to make it happen. Or we could leave it as an open platform that others can adopt. You will see something in the future, but it will be attached to another existing organization. It won’t be a BBH-owned property; that’s not our intention.