Battle of the Digital Brands: JCPenney vs. Kohl’s 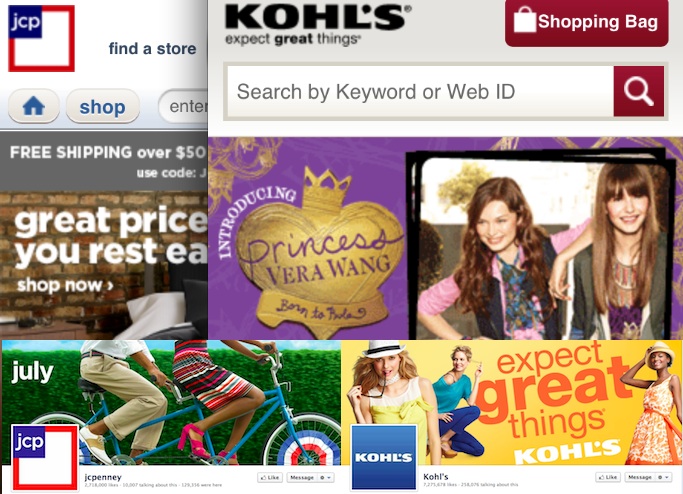 With back-to-school right around the corner, we put JCPenney against its competitor Kohl’s to see who is doing a better job of connecting with consumers via digital platforms.

Facebook
With 2.7 million likes and 10,000 people talking about the brand, JCPenney focuses its Facebook efforts on letting fans know what’s going on at the company. From new styles, to home décor and sale announcements, the retailer keeps its fans in-the-know about all things JCP. Its timeline photo is themed according to the time of year and the one there now is very much in the spirit of July, with greenery, people wearing bright colors, enjoying the outdoors. Posts get roughly 500 likes each with about 100 comments on average. The strategy for JCP is clearly engagement, with open-ended questions around products that can transform a room, for example. Fans can sign up for JCP rewards on the Facebook page, find stores near them, enter a mommy sweepstakes and sign up for email and mobile communications from the brand.

YouTube
The JCP YouTube channel has 5.1 million video views with a little over 2,000 subscribers. The page is decorated with the same image that JCP’s Facebook and Twitter pages are decorated with, keeping with the summer theme. There are 24 videos on the channel that never push any products at viewers. JCP comes out with a video for each month of the year, highlighting what’s to come for that month and how JCP fits into it all. For the month of June, the video shows scenes from Father’s Day, graduations, weddings and barbeques. Although, no product is being pushed, the point of the video — that JCP can play a role in all of these June happenings — is understood.

Pinterest
JCPenney has 1,700 followers on Pinterest. Unlike its other efforts, Pinterest is being used to push products. From shoes, to watches and couches, the boards are filled with JCP merchandise and users can click to be routed to the items on jcp.com, where they can buy. JCP also has a back-to-school board up already, so the retailer is starting early with wooing moms.

Mobile
JCP’s site is optimized for mobile. Its design is consistent with what JCP does on desktop. Consumers can shop and buy from the site, but they could also sign up for emails and mobile alerts, check their gift card balances, watch videos and track an order. The JCP mobile app is shoppable and lets users browse through all of the items available on jcp.com. It also connects users to mobile alerts and email communications from the brand. The app is structured so that the best-priced items appear first, giving users great deals and offers.

Facebook
The Kohl’s Facebook page boasts 7.2 million followers and 272,000 people are talking about the brand. Its timeline photo is more generic than JCP’s, depicting women in various styles and the retailer’s tagline, “Expect great things.” Kohl’s often asks consumers to vote on its Facebook page. One posts asks consumers to vote on which items they want to get great discounts on. The retailer often conducts flash sales and this is how it decides which items will be reduced. The majority of posts get more than 1,000 likes and comments, so Kohl’s engagement levels are higher than JCP’s, but its followership is larger so that makes sense. The Facebook page houses Kohl’s videos, access to the Kohl’s Cares program and gives access to some of the retailer’s favorite brands and their designers. There aren’t links to Kohl’s other social media destinations, which is a miss.

Twitter
Kohl’s has 34,000 followers on Twitter. There are no links to Pinterest, Facebook or YouTube, which could be beneficial for a retailer that does include these. Posts focus on replying to customers who tweet about the retailer’s products. Some are customer-service focused. The fact that the retailer spends so much time replying to customers is a smart move. Kohl’s is trying to be part of the conversation. One follower tweeted, “Now on the way to Kohl’s to find running shoes for camp.” Kohl’s responded back, “Let me know which running shoes you find, Jasmine.” The fact that the retailer often uses the customer’s name is an effort to get more personal with followers.

YouTube
Kohl’s videos on YouTube have been viewed about 4.1 million times. Some videos highlight new collections and products, while others are focused on giving viewers styling tips. The retailer has 144 videos on YouTube.

Pinterest
Kohl’s strategy on Pinterest is promotional, dedicated solely to its “Hauls of Fame” contest. With just three boards and 618 followers, the contest could have just had a dedicated board, instead of being the sole purpose of the Pinterest presence. Kohl’s is not making full use of the opportunities that Pinterest offers.

Mobile
The Kohl’s mobile site has a much cleaner look than JCP’s, although it does not do anything to acquire consumers (email, mobile alerts) like JCP does. The site is shoppable, but that’s really the only impressive functionality. The Kohl’s mobile app lets consumers scan products in store to get more information. Sure, consumers can shop the app, but for those who prefer going to the physical store, the app becomes an in-store companion. The Kohl’s app has an ad of the day, based on a consumer’s location. The ad I was served gives 30 percent off on anything in the Princess Vera Wang line.

Conclusion
Overall, JCP is winning in social media. Although, the numbers would say otherwise, from a social media standpoint, JCP’s social strategy follows all of the best practices for engagement. Its posts are well-thought out and do a good job of delighting consumers and addressing their needs. From a mobile perspective, it’s a tie. Both retailers are doing different things on mobile, but each is doing them equally well. Both experiences are user friendly.