Battle of the Digital Brands: Fender vs. Gibson 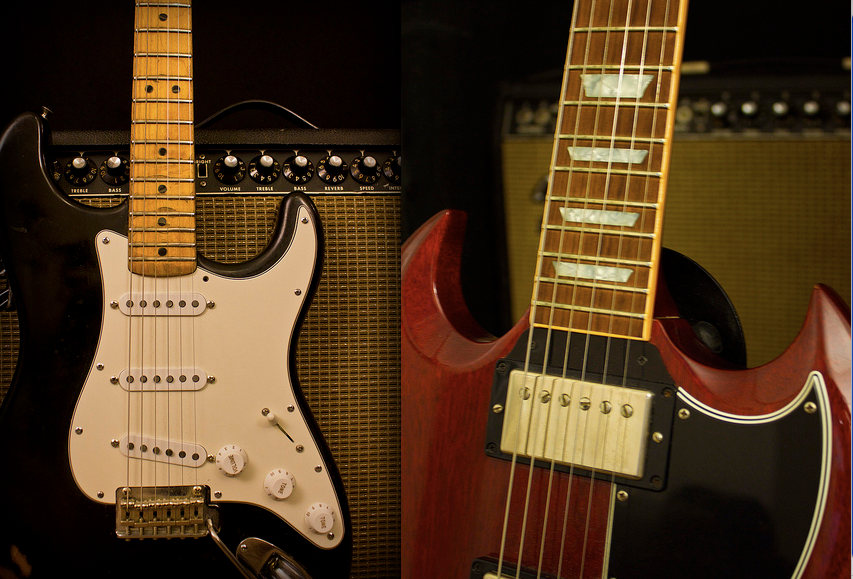 In this week’s edition of Battle of the Brands, we take a look at two American icons and innovators: Fender and Gibson Guitars. Music is as social as it is personal, so which one hits the right notes and strikes the right chords on the social media stage?

Gibson:
Facebook: Gibson’s timeline image is the definition of rock and roll: a Les Paul guitar straddles a tight-leather pant leg, and the lights of the stage descend upon the rock star. The guitar company has amassed 1.8 million likes but still seems to be figuring out how to use this platform. The timeline doesn’t start at the company’s 1894 beginning; it starts when the company joined Facebook in 2009. The timeline isn’t fully functional. Some tabs don’t even work. That’s a bummer.

Twitter: Gibson has 413,000 followers but also manages to follow an amazing 110,000 people. Its brand is well represented on the site, with the Gibson SG as its background image. With so many different types of Gibson guitars — the SG, Les Paul, ES-335 — that have played a part in rock history, the company can’t go wrong with any of them as a background. Tons of engagement on Twitter: links, questions, @ replies, retweets and contests. This is a brand that really understands the value of Twitter.

YouTube: There are 438 videos on the Gibson YouTube channel, with 31,000 subscribers and 15 million views. Videos include live performances, interviews with musicians and, curiously, a 30-minute press conference with the company’s CEO, Henry Juszkiewicz, after its Nashville and Memphis facilities were raided by the Federal Government in August 2011 for illegally trafficking in wood.

Mobile Website: Gibson has a mobile site. From its mobile homepage, you can find products, news, features, artists and events, as well subscribe to an RSS feed, discuss in its forums and link to the CEO’s Forum, 4henry.gibson.com.

Mobile App: Gibson partnered with Legacy Learning Systems to create the “Gibson Learn & Master Guitar App” which gives guitarists at all levels guitar lessons. It also added StudioShare to the app, enabling guitarists to “record, mix and share your music with friends, fans and fellow musicians anywhere in the world.” In-app purchases let you work with GarageBand, ProTools and Audacity, as well as more storage.

Fender:
Facebook: Fender’s Facebook page has acquired 1 million likes, and its timeline photo features two of its biggest guitars: the Stratocaster and Telecaster. There are links to photos that show off the guitars, both from the company and from user submitted images. Links also include videos, surveys, gear (which takes you to a buy page on Fender.com) and events. The timeline starts with an image of the first Fender factory where the guitar company was founded in 1946, and it takes you through a history of the company, from prototypes to deals with musicians to print ads. It would have been entertaining and informative if the company synched its timeline with that of its influence in rock ‘n’ roll, going through the decades with important guitarists using Fender: Clapton, Hendrix, Stevie Ray, Bruce, Eddie Van Halen, John Mayer, ZZ Top.

Twitter: Fender racked up 102,000 followers on Twitter but also follows 11,000. Its stream is a mix of @ replies, retweets, links to Fender-related products, events and musicians, questions to its followers and contests. The background image looks to be the base of a Strat. Interestingly, Fender has two promotional images up on the left side of the Twitter page: one to win an autographed Sonic Youth Jazzmaster, the other to win a mandolin from Flogging Molly.

YouTube: Fender has 34,000 subscribers to its YouTube channel, which houses 956 videos which have been viewed 27 million times. Clips run the gamut: instructional video, videos that highlight the instruments, videos of Fender musicians from Buddy Guy to Bruno Mars to John Mayer. Videos are uploaded fairly frequently, every week it seems.

Mobile Website: Fender has a mobile-optimized site with products, dealers, news, the company blog and videos. While you can’t buy gear from your phone, you can enter your zip code and get addresses and maps to the nearest Fender retailers. The videos are also fun, featuring many product demo options, as well as videos for 2011’s Coachella, 2011’s SXSW Featured Acts, artist interviews and the 2011 Fender Showcase, among others.

Mobile App: AmpliTube Fender is a Fender-approved iPhone/iPad app that lets users play and even record through a Fender amp. For $15, you can get that famous Fender tone on your mobile device. You’ll need to pick up Apple’s iRig to connect your guitar to your device, but once you do, you have the Fender amp world at your fingertips.

Conclusion:
Social: Both instrument makers understand that music is a universal language, and each has certain advantages on different social networks. Gibson’s Twitter presence goes to 11, but its Facebook and YouTube pages could be stronger. Fender uses Facebook to tout the company and its brand, uses YouTube to showcase the guitars and artists, and uses Twitter to engage with consumers. This round goes to Fender.

Mobile: Each brand’s mobile platforms help users get information on the go, as well as where to buy products. As for apps, Gibson’s app is a tool that every guitarist should have. This round goes to Gibson.