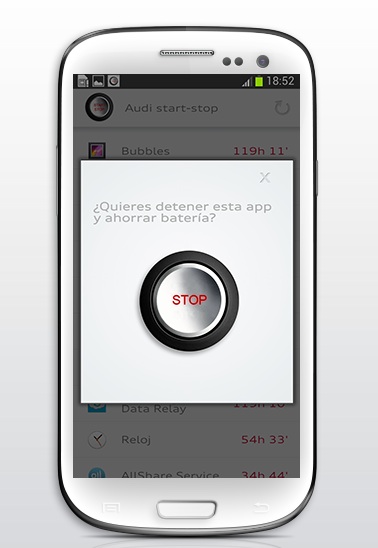 Audi is trying to differentiate itself with “start-stop” technology in its cars that makes them more efficient by automatically shutting off the engine when the car is idling. It has taken this principle and cleverly applied it to an Android app.

Any smartphone user knows the biggest bummer is losing dwindling battery power. The annoying part of this is battery life is often drained by power-hungry applications unknowingly left open in the background. Audi’s Start-Stop app neatly solves this problem by giving users alerts of applications that aren’t being used but are still open. The user can then simply turn them off, conserving battery power.

As David Ogilvy said, “Big ideas are usually simple ideas.” An updated version might be, the best ideas are simple ideas — and simple executions. Audi gets extra points for making an app that is not only genuinely useful but completely reinforces the brand message and demonstrates a product feature in a novel way. DDB Barcelona built the app for Audi. The video below explains how it works.