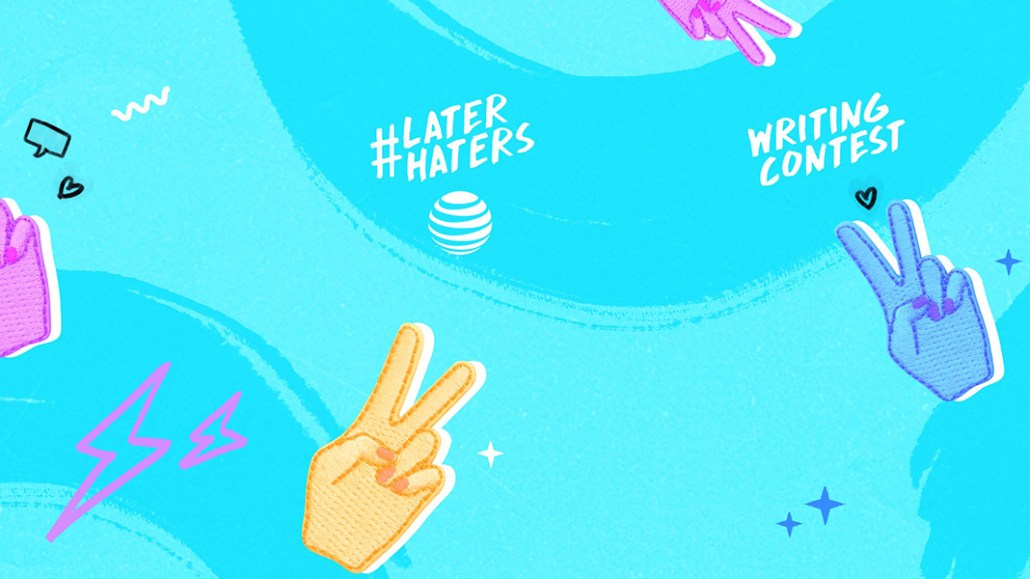 Millennials are so last season for AT&T. The telecommunications company has moved on to Generation Z, which Beth Shiroishi, vp of global corporate social responsibility strategy, calls the “next buying power generation.”

AT&T is working with entertainment company and creative agency Fullscreen on its “Later Haters” campaign that encourages teens to use positive messages to stand up against online hate. The campaign, which began in 2016 and continues to evolve, illustrates AT&T’s overall Gen Z strategy that revolves around three main points: leading a conversation about cyberbullying, using influencers who are activists and placing its messages on up-and-coming platforms such as Wattpad. The campaign has generated more than 175 million impressions and nearly 8,000 more social followers, according to AT&T.

Teens are embracing activism and cause marketing. With “Later Haters,” AT&T wanted to dominate the conversation about cyberbullying and has learned to stay away from blanket, black-and-white statements, according to Shiroishi.

“Much of the public discourse right now would lead you to believe that we are in this bilateral world where everything is one thing or another, but this generation is so much better able to understand nuances than older generations,” she said. “Gen Z knows there’s some good and bad in everybody.” For that reason, AT&T makes sure to not leave bullies out of the messaging.

Every part of the “Later Haters” campaign has either had a big-name celebrity or a flock of micro-influencers attached to it — all of whom are connected to the cause of eliminating online bullying and have had their own struggles with it.

AT&T’s influencer push started in August 2017, when it partnered with Olympic gymnast Gabby Douglas to encourage sending kind messages online with the hashtag #EveryDayVacay. Then, from August to November, AT&T produced its own show about high school bullying, “Guilty Party,” which appeared on social platforms and AT&T’s streaming service DirecTV Now. The show starred a lineup of influencers, including Tiffany Alvord, Kian Lawley and Teala Dunn, with a combined following of 38 million.

At the same time, AT&T worked with the Dobre Brothers, twins with a combined following of nearly 10 million, for We Day, a touring event that inspires youth to make a difference in their communities, as well as with YouTube stars Rebecca Black, Miles McKenna and Shannon Beveridge for the “Love is Love” cross-country tour put on by Fullscreen Live from October to November.

AT&T is venturing onto new platforms to reach Gen Zers outside of Instagram and Snapchat. Wattpad, a site where people can share their own fan fiction, is a promising new destination for AT&T, said Shiroishi.

AT&T ran a contest on Wattpad — which has 65 million users and raised $51 million in funding from investors including Tencent, according to the company — from October to November 2017 as part of the “Later Haters” campaign, asking people to write 500-word essays on the topic: “What would you like to say to your haters?” Shiroishi said the company received more than 900 essays and 14,464,736 impressions over a six-week period.

“For Gen-Z, [Wattpad] really lets them bring their voice to the table,” said Shiroishi. “Plus, it provides a deeper connection than a quick post to Instagram or Facebook.”