Antique antlers and giant slingshots: The totems of advertising agencies

Standing smack in the middle of Mother’s Manhattan office is a fire-engine red telephone booth — a nod to the agency’s London roots. A quick jog downtown, at Barbarian’s New York digs, a giant, white undulating “superdesk” courses through the space.

Agencies are known, ideally, for the work they do. But many of them can also be boiled down to a symbol — a something emblematic of the spirit and feel of the shop.

Here are a few of our favorites:

In a decade-long career spent at agencies of all sizes, David & Goliath founder David Angelo said that he never quite understood what each of those agencies stood for. Which is why he wanted his own agency to be a living, breathing brand that can be summed up in its own symbol. A seven-foot-long slingshot stands in its lobby as a reminder that no Goliath is too big to defeat.

“Our mission is to inspire our employees and our clients to overcome their Goliaths, and the slingshot serves as a constant reminder of that,” he said. 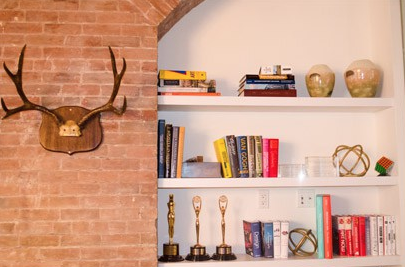 When Pereira O’Dell first opened its doors at its BarrelHouse space in San Francisco in 2008, its founders chanced upon an enormous set of antique antlers. Those antlers were not only incorporated into its logo but have also come to symbolize the agency along with the crystal chandeliers that dot its offices in San Francisco, New York, São Paulo and Rio De Janeiro.

“They are a reminder that in our business it’s critical to embrace the old and the new, the classic and the revolutionary,” said Cory Berger, managing director at Pereira O’Dell New York.

McKinney’s IT and creative teams teamed up to create a digital “window” that connects its two offices in New York and Durham, North Carolina. The window is essentially an always-on giant window that lets staffers from each office have face time with each other. It’s not unusual for employees in both offices to pass each other in the window, stop and have an impromptu meeting — or game of beer pong.

“The window has become a great way to connect our teams,” said Kerry Fitzmaurice, McKinney’s managing director in New York. “It’s the perfect catalyst for our one-agency, two-doors business model.”

From its name to its decor, San Francisco-based creative agency Cutwater is heavy on the nautical theme. So it’s only fitting that it has sails from racing yachts draped on its roof, vintage outboard engines in each board room and oars from rowing skiffs in the kitchen. It’s symbol, a surfboard emblazoned with the California log, emphasizes its West Coast pedigree.

GreenLight’s office is a stone’s throw away from Los Angeles’ famous Sunset Strip — just down the street from iconic music venues like the Whiskey a Go Go and The Roxy where bands like the Eagles and Guns N’ Roses made their debuts. The agency leans heavily on its surroundings for inspiration: Its centerpiece is a custom-made coffee and food bar built out of vintage amplifiers and band sound equipment.

There’s nothing more characteristically Leo Burnett than a bowl of apples. When Leo Burnett opened his agency during the Great Depression in 1935, he brightened the office with a bowl of apples to represent optimism. A newspaper columnist wrote that it wouldn’t be long before Burnett started selling apples on the street instead.

“Today, all of our offices around the world have bowls of apples in honor of Leo Burnett, the man, representing our 80-plus-year quest to be the best in the world — bar none,” said Leo Burnett CEO North America Rich Stoddart.

The mascot of Crispin Porter + Bogusky’s agency once belonged to P.T. Barnum. The erstwhile pachyderm named “Hermy” sits in the agency’s Boulder lobby. The elephant is also incorporated into the agency’s logo. Hermy sits in the CP+B Boulder lobby to remind the agency of its mission: “To create the most written about, talked about, and outrageously effective work in the world.”