American Apparel apologizes for use of Challenger explosion photo 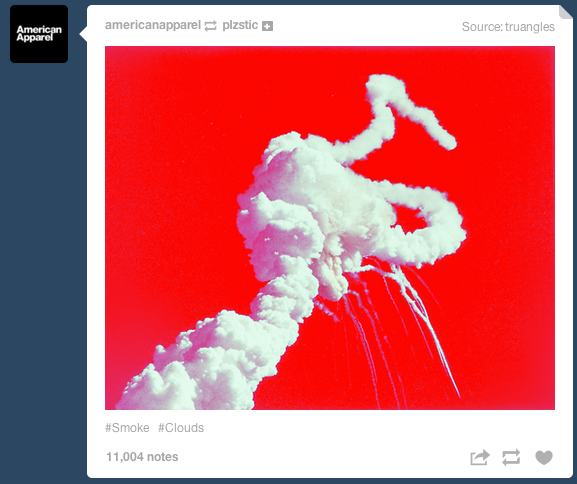 American Apparel, a brand that is no stranger to manufactured controversy, committed an accidental offense for once yesterday. Late in the afternoon, a social media manager for the clothing line reblogged an image of the 1986 Challenger space shuttle explosion to its Tumblr account, superimposed over a red sky with the hashtags “#smoke” and “#clouds.” Just in time for the Fourth of July.

The image is the iconic photograph of the devastating shuttle explosion that claimed the lives of seven astronauts, including teacher Christa Corrigan McAuliffe. The blog post quickly spread, along with not-so-gentle reprimands from the peanut gallery, on both Twitter and Tumblr.

@Red__Rover @kenyatta @americanapparel @slarkpope That’s what happens when you have Millennials run your social media accounts.

Within hours the brand pulled the offending blog post and issued an official apology, while distancing itself as far as possible from the person responsible for the posting.

Even the apology struck many as weak or, worse, disingenuous.

Trying to process an @americanapparel social media associate who could possibly be "unaware of the event" of the Challenger explosion.

The timing is unfortunate for American Apparel, a brand as beloved by hip millennials as it is derided by grown-ups weary of its porny marketing shtick. Dov Charney, the company’s controversial founder was ousted as chief executive last month “for cause.” This week, the notoriously scandal-plagued chief executive struck back, borrowing nearly $20 million to boost his ownership stake to 43 percent from 27 percent — giving Charney leverage as he fights to regain control of his company.

This is not the first time the Challenger disaster has been appropriated for pop cultural purposes. Late last year Beyoncé nimbly evaded a swarm of controversy for using a six-second audio clip at the start of her song “XO” in which NASA’s public affairs officer at the time, Steve Nesbitt, is heard saying, “Flight controllers here looking very carefully at the situation. Obviously a major malfunction.”