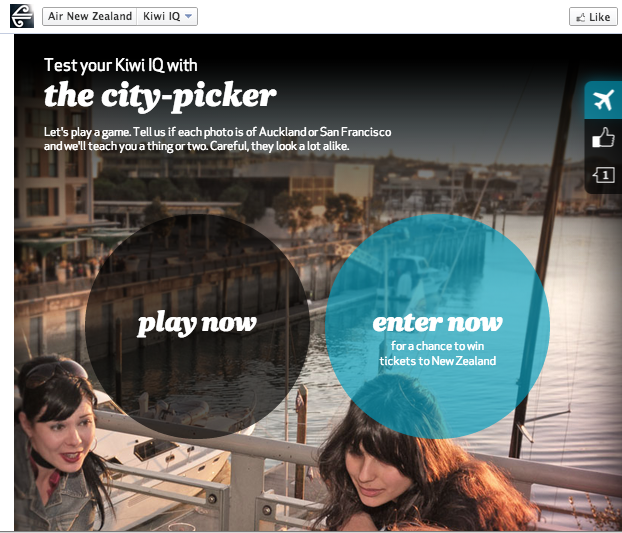 For two cities over 6,500 miles apart, San Francisco and Auckland have a lot of similarities. That’s the tricky part of Air New Zealand’s new campaign.

To promote its new daily flight route between the two cities, Air New Zealand is testing your knowledge of Auckland and San Francisco landscapes.

With the help of agency DraftFCB, Air New Zealand has created a Facebook app called “The City-Picker,” which tests users’ “Kiwi IQ.” The visual quiz app asks users to identify whether each image they are presented with is from Auckland or San Francisco. After you make your guess, the app reveals the correct answer and some local fun facts relating to the image, like where Auckland’s main shopping district is or the fact that Auckland’s nearest wineries specialize in Cabernet.  Who knew how similar Auckland and San Francisco look? May as well skip the long flight.

Users can also enter for a chance to win a flight to Auckland through the app.

According to DraftFCB, the app has already gotten 12,000 unique visitors since it launched July 22, and 80 percent of people who start the game finish it through to the end to get their scores.