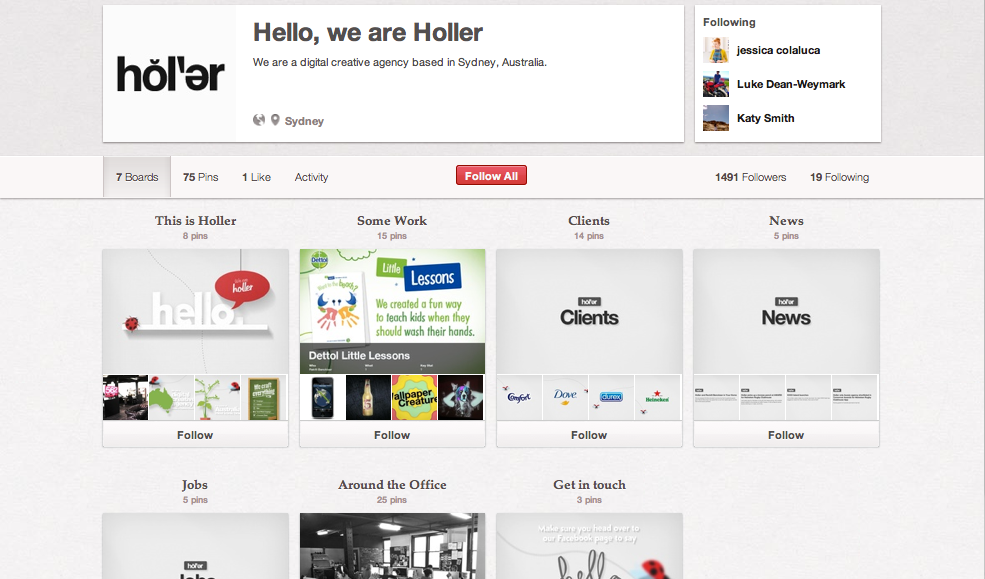 In 2009, creative agency BooneOakley famously turned its back on its corporate website and moved its entire online presence to YouTube in the form of an interactive video experience. Three years on, and with social platforms multiplying, a growing number of agencies are following suit, shunning websites entirely in favor of living instead exclusively on networks such as Facebook, Twitter, Pinterest and Instagram.

Most agencies maintain presences across multiple social platforms, of course. It would be remiss of them not to, given the fact that almost all preach the growing importance of social strategies to their clients. But as new networks and platforms emerge it’s becoming increasingly fashionable for agencies to pack up from their hosting providers and set up shop within the walls of the latest social belle du jour. Nobody ever accused agencies of resisting the urge to jump on trends, after all.

Australian agency Holler Sydner recently proclaimed itself the first agency to host its entire site on Pinterest, for example. A series of pinboards make up the various sections of the site, featuring content such as news and client information, as well as examples of its work, of course.

According to Holler CEO Mike Hill, the motivation for the move was client driven. “In true Holler fashion, to get a better understanding of Pinterest (and to look at pretty pictures) we wanted to see whether we can make it work for ourselves. And then pass on key learnings to our clients,” he told Adverblog.

Omnicom Group’s Tribal DDB, meanwhile, opted for a similar approach on Instagram. Users can locate the TribalDDB_Israel account and then navigate its content using hashtags such as #workers and #clients.

Like Holler, TribalDDB said its Instagram experiment is driven by its desire to understand the potential of the platform for its clients. “The highly visual nature of the site boosts its relevance for a lot of brands,” said the agency’s head, Eilon Zarmon. “We anticipate that a number of brands will explore opportunities with Instagram and other up-and-coming social networking sites and mobile applications.”

That’s true, but let’s face it: The major advantage of such a move is the publicity it attracts. Agencies see value in being the “first” to shift their site to these new platforms, and in creating the perception that they’re tech-savvy early-adopters. Sure, it’s nice for an agency to practice what it preaches, but would it really preach for a client to ditch its site for Instagram?

The fact of the matter is that platforms such as Pinterest and Instagram simply aren’t designed to house information in the manner that agencies are attempting to use them. As a result, the experiences are often clunky and difficult to navigate, and generally harder to use than a regular website would be.

Argentinian agency Kamchatka’s Twitter-based site is a good example of this. Each “section” of its site is housed under a separate Twitter handle, which means users are required to click around a maze of confusing links, hashtags, and @replies to get at the content.

There are more successful examples out there. BooneOakley’s early YouTube-based effort works well enough and still exists today, although a non-YouTube version of its site has also been made available.

WPP’s Stockholm-based agency Ingo does a good job with Facebook, too, and features a robust portfolio of its work, contact details and the general functionality you’d expect from a website alongside the social features afforded by the network such as a wall and the ability to share content easily.

But ultimately the whole concept of ditching a dedicated site in favor of a social platform feels gimmicky and, by now, a little tired. As long as new social platforms continue to emerge, we can expect agencies to keep attempting to make it work, for the attention if nothing else, but the idea that clients benefit from the decision seems a little far fetched.

As the social platform landscape continues to fragment, a large part of the agency role is now helping clients navigate which ones to invest their time and effort in. With that in mind, it makes more sense to invest in understanding them all equally rather than doubling down on one.