In the spirit of giving thanks, we take a look back at what brands and agencies have been thankful for throughout the year. Turns out it’s for each other!

Here’s a brief roundup of agencies and their brand significant others engaging in a little PDA throughout 2015 to get us in the mood for Thursday. Gobble, gobble.

True to the name of the beer, the look and feel of the bottle was the hoppy by-product of collaboration — Young & Laramore designed the label and packaging. “We’re thankful of the close working relationships we have with our clients,” Bryan Judkins, principal and creative director at the agency, told Digiday.

Arby’s and Fallon
Arby’s took out ad space on digital billboards near the Target Center in Minneapolis this January, which is also the hometown of its agency Fallon, acknowledging the shop and commemorating its first anniversary as Arby’s agency. Fallon spearheaded a brand refresh for the fast-food chain that included a campaign with a new tagline — “We have the meats.” One of the billboards played on that, saying, “We have the Fallon.” See what they did there? 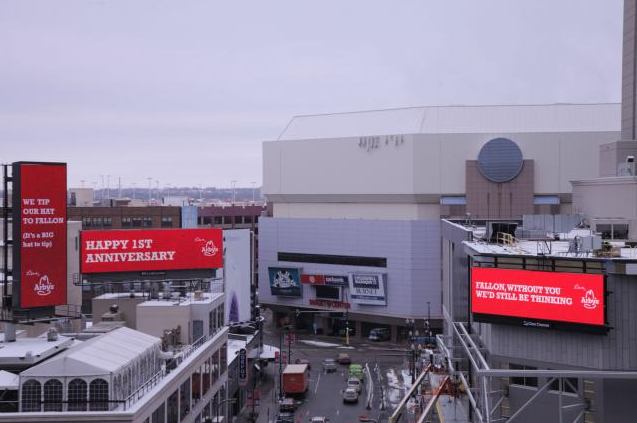 “More than the public display of thanks — which was unbelievably gracious — is the fact that it happens every day,” Rocky Novak, managing director and head of the Arby’s business at Fallon, told Digiday. “They treat us like genuine partners, welcome us into their business and know how to have fun. And I really think the work shows it.”

Giant Spoon and STX Entertainment
When agency Giant Spoon’s client, newly formed movie studio STX Entertainment, received a 93 percent rating on Rotten Tomatoes for its first film “The Gift,” the agency decided to celebrate the occasion with a twist. Rather than flowers or a thank-you note, the agency sent them a giant basket of heirloom tomatoes with artisanal olive oil, vinegar, Burrata and a big sign that read “Certified Fresh” instead.

“It is important to foster genuine excitement at the agency when something goes well for one of our clients,” said Jon Haber, co-founder at Giant Spoon. “Celebrating a client’s success with a gift is great, but it is important to challenge our team to think creatively about what kind of gift is meaningful, useful and fun, as it helps engender the idea that we are all in this together.”

Colle + McVoy and Grain Belt Beer
When Colle + McVoy created new football-inspired labels for Grain Belt Beer this fall, the brand thanked the agency by making sure that it got first dibs. Grain Belt sent the first bottles of the line with new labels signed by the owner the company. The brand hasn’t held back on showering the agency with some love earlier either — it had sent the agency team handwritten notes with vintage matchbooks after the initial pitch, playing on the fact that vintage designs are quite valuable given its 125-year-old brand heritage.

“It’s great to be working with a client who values relationships just as much as we do,” said Dustin Black, group creative director at Colle + McVoy. “Personal touches keep us focused on why the work matters.”

The Ad Council and its agencies
At its annual dinner in New York earlier this month, the Ad Council thanked its agencies for their service through a fun parody. The video shows Ad Council execs trying to save time by thanking all the agencies on a single conference call. Things hit a few snags. The actor playing David Christopher — the CMO of AT&T Mobility and chairman of the Ad Council’s board — inadvertently and hilariously ends up insulting agencies as well as Sir Martin Sorrell.

The video was created by Grey, which takes its licks in the video.