This Twitter vigilante is calling out mediocre promoted tweets

The world of branding has another vigilante. Enter @SocialLandlord, an anonymous Twitter account from a creative agency employee that is punishing brands that send out bad promoted tweets by replying to them — because every time an advertiser sees “engagement,” in the form of an RT, reply, favorite or click, they get charged. Executives familiar with the matter said that cost varies depending on the advertiser, who sets a maximum bid for engagement, but it can be between 50 cents and a few dollars for each reply.’ 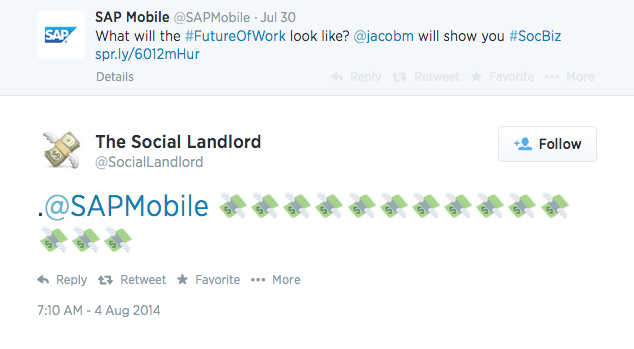 Who are you?
I’m someone who is fascinated by social media marketing. I’m not a ‘social media guru’ or someone who hates traditional advertising – I simply believe that social media can be a powerful tool for brands when used the right way. I’d also like to add that I have nothing against ‘promoted tweets’ – they’re actually a pretty good product and lots of brands are seeing success from ‘promoted tweets’.

What made you want to start doing this?
As someone who works in the ‘creative industry’, @SocialLandlord is a cry for help. I wanted to draw attention to the fact that the vast majority of brands active in the social space don’t know the first thing about social media.

Marketers always jump at the chance to use a new social media platform to promote their products & services. However, only a fraction of them take the time to understand how the platform works and what makes content popular on that specific platform.

Instead of trying to tailor their messages and give people what they want, they treat social media as a distress channel – a place where they can hit people in the head with their latest TV ad or latest piece of outdoor. Problem is, no one sits on Twitter all day hoping to ‘engage’ with branded content. It’s 2014, if you want people’s attention – you should earn it. And no, your ‘upload a selfie to win X’ competition isn’t gonna cut it. 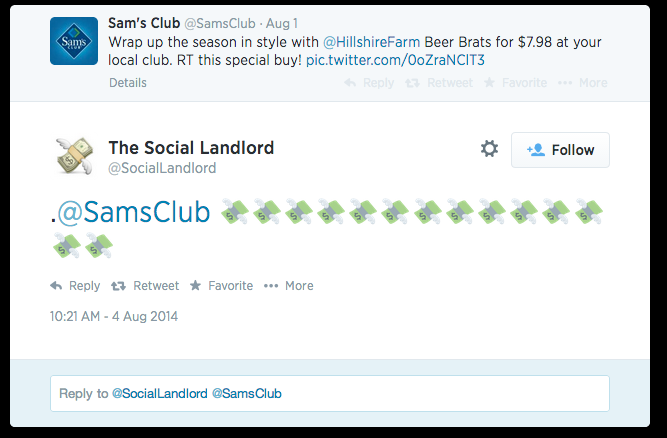 Brands love to pay to get insulted on Twitter, it seems. Why?
I don’t think a lot of brands realise how wrong their approach is. They’ve been mindlessly force-feeding their unwanted messages down people’s throats for decades, and to them, social platforms are no different. They simply don’t realise that it doesn’t have to be that way and that a clear strategy and long term commitment can go a long way. I personally love how brands like Denny’s manage to adapt their approach and behaviour to each platform. They don’t simply blast the same old message – they understand how their audience use each platform and adapt it. And it works. Go figure.

What can be done to fix this problem?
Brands need to remember what got them interested in social media marketing in the first place. In the early days, it was all about doing something creative that people would notice and talk about. It was about using social platforms in new ways — like when Burger King asked their fans to unfriend 5 people on Facebook for a chance to win a Whopper.

Sadly, native advertising solutions like ‘promoted tweets’ and ‘Facebook sponsored posts’ are making brands lazy. Instead of coming up with something exciting and worthy of a spot in people’s news feeds, they simply pay for the right to invade people’s feeds with any old crap.

That’s what gave me the idea. I thought it’d be funny to try and reclaim that space in a way. Twitter’s pricing model is engagement based – when a user clicks on a promoted tweet, the brand pays.

How do you define a “bad promoted tweet” that you think you should respond to? Which ones won’t you respond to?
I realise this is fairly subjective – I’d say a ‘bad promoted tweet’ is something spam-like, something that feels like I’ve just received a piece of email marketing I never signed up for i.e BUY THIS, WIN THIS, SIGN UP FOR THIS, UPLOAD A PHOTO TO WIN X.

Good promoted tweets stand up easily. It’s a sea of sameness out there so you’ll know when you see one.