‘Absurd:’ How people are responding to Tinder’s Twitter tantrum

No matter how it’s labeled, Tinder made it clear on Twitter that it doesn’t handle rejection very well. Last night, the dating app’s social media presence became unhinged and exploded in a 30-tweet tantrum against Vanity Fair writer Nancy Jo Sales over a piece she wrote about the app’s affect on dating.

The Vanity Fair piece, “Tinder and the Dawn of the ‘Dating Apocalypse,’ strings together personal accounts of twentysomethings in New York complaining that the hookup culture perpetuated by Tinder its ruining the sanctity of monogamous relationships.

In a series of posts, the company labeled it as “one-sided journalism” that had an “incredibly biased view,” while claiming that #GenerationTinder (their words!) is creating “connections that otherwise never would have been made,” like in North Korea, which is probably news to a lot of Internet-blocked North Koreans.

It began shortly after 6:00 pm Eastern Time with this:

–@VanityFair Little known fact: sex was invented in 2012 when Tinder was launched.

Tinder was also mad that Sales didn’t “reach out” to them (… for a prepared statement?):

Next time reach out to us first @nancyjosales… that’s what journalists typically do. — Tinder (@Tinder) August 11, 2015

The tantrum quickly morphed into a manifesto on how Tinder is an altruistic medium that’s bettering the world:

And went on some more: 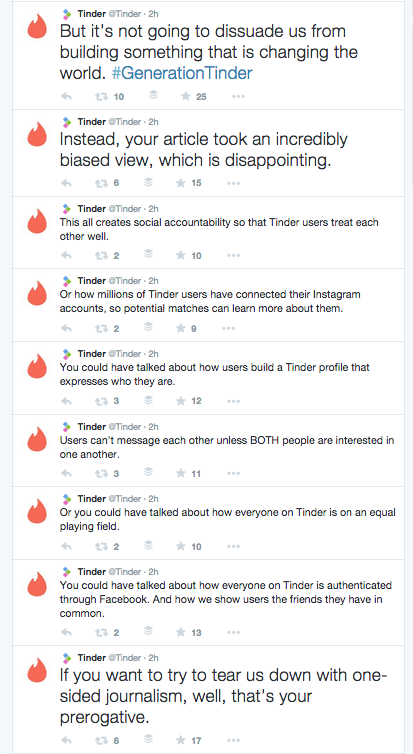 The tantrum lasted for about an hour. Things have gotten back to normal this morning with a tweet based off stolen content from a parody account. Anyway, the lunacy of the diatribe and seemingly sourpuss behavior exhibited by Tinder caught a lot of people’s attention last night.

“You could have written a press release. And yet instead you wrote journalism. SHAME ” — @tinder

Is Tinder gonna tell Vanity Fair she has “blood coming out of her wherever” — Sarah N. Emerson (@SarahNEmerson) August 12, 2015

Sales, who’s best known for her most iconic piece that blew open the Bling Ring, took it all in stride. Her Twitter feed was filled with retweets from fans complimenting her reporting and blasting Tinder’s reaction.

Is Kim Jong Un on Tinder?

So, was Tinder’s schizophrenic tweet-storm justified? Not at all, says R/GA’s managing director of copywriting Chapin Clark. He told Digiday the whole thing was “absurd.”

“It would seem to be PR 101 that if you’re rubbed the wrong way by a story like that, than the worst thing you can do is draw attention to it,” adding that if anyone who saw the Vanity Fair piece probably would’ve quickly forgotten about it, anyway.

“Why go on a 50 tweet tweet-storm about it?,” he asked, labeling the bizarre practice an “abuse of the medium.” The tantrum is unlikely to have any longterm affects on the brand, and might be a ploy to make more people download it, he said, but this was the wrong way of going about it.

“People joke on Twitter to ‘never tweet’ and there’s eternal truth to that,” he said. “Often times saying nothing is the smartest thing.”

Tinder is standing by its tweet-storm, although it admitted that it “overreacted” in a statement. Perhaps this is just how public relations is handled in #GenerationTinder.