5 things agencies taught us this week 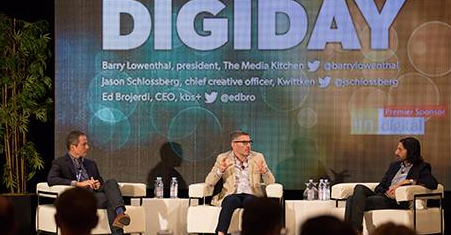 Top executives from the nation’s leading agencies were on hand at the Digiday Agency Summit in Austin, Texas, this week to discuss the trends and challenges facing their industry. These are five key trends that emerged from three days of panel discussions and one-on-one meetings:

Talent is the No. 1 agency headache.
Agency representatives at the Digiday summit were asked to write down their biggest challenges. The issue they reported grappling with the most turned out to be talent. Pete Stein, global CEO of Razorfish, said the churn at his agency was 20-25 percent annually. “You need to focus on retention,” he said. “You train people for a year and Google or Facebook or Yahoo will hire them away for twice the salary.”

Kristen Cavallo, president of Mullen, reported similar numbers. “When people leave it’s less because they’re frustrated with Mullen,” she said. “It’s because we haven’t done a good job of articulating a career path.”

Which brings us to our second takeaway …

Millennials are not the enemy.
Several high-level executives declined to throw the Latest Generation under the bus. Although managing the youngest agency employees can be challenging culturally, few agency leaders were eager blame them for any broader failings. “I’m actually jealous of them most of the time,” said Cavallo. “They’re better negotiators than I ever was. They have a strong sense of self.”

That fervor for negotiating was at the receiving end of a few barbs, to be sure. Liz Ross, CEO of BPN, told a story about a twenty-something employee who accepted an offer from a rival agency but still demanded her bonus for the previous year’s work. (It was denied.)

Still, millennials have higher expectations for themselves, which creates an energy angecies would do well to harvest, or otherwise risk having them poached. For its part, Razorfish has a robust internship program, according to Stein, out of which around 60 percent get job offers annually.

Give your people time to create.
If agency employees don’t have time built in where they can go off and do different things, they’re going to leave, said Jon Jackson, executive creative director at Brooklyn’s Huge. Colin Nagy, executive director of media and distribution at The Barbarian Group, echoed similar sentiments: give creatives time to work on side projects and tangential creative endeavors.

Mullen has this baked into their growth plan for younger employees. As an incentive to stay and keep creatives’ chops sharp, the agency has created Mullen Minds, which puts training into employees’ hands by giving them a set allowance they can use to enrich themselves. And those educational opportunities — improv classes, banjo lessons — don’t have to be about client services or even advertising.

But don’t take too much time to play because …

Speed is a major challenge
After talent retention, agencies reported grappling with speed (and, relatedly, clients) the most.

“Planning cycles are too far in advance,” said Razorfish’s Stein. “Way too long.” Agencies need to move to a model that is much more real-time, he said. It’s not about playing lip service to Twitter and Facebook, he said, it’s about having real-time woven into the company’s DNA.

“Invention needs to be baked in,” echoed the Media Kitchen’s Barry Lowenthal. Similarly, Jason Schlossberg of Kwittken suggested that, “Where the rubber hits the road is how the company is built.”

The problem is that too many companies might be focused on the past, without a clear idea of where to innovate. “We love to declare things dead,” said BPN’s Ross. Whether it’s television, print, radio or newspapers, “There’s always this sense of impending doom. Something is dying and we have to be ahead of it.”

This outlook, counterintuitively, stifles creativity. “Clients want more in terms of innovations, more in terms of being led,” said Ross. “Agencies are operating in a mode of, ‘This is what we’ve always done’.”

To be fair, this puts a certain amount of burden on the client, too. If an agency offers up something that has never been done — or something that may be a risk — the client has to be prepared to take the leap. Which means convincing them of the return on investment. Which is hard to come by without quality creative. Meaning …

Content is still king
Deacon Webster, co-founder of Walrus, showed how taking a risk can reap enormous dividends for both agency and client. In 2009, for example, Walrus built an app for steakhouse Maloney & Porcelli that generated fake receipts so high-rollers could hide their pricey lunches come expense report time. A stunt, sure, but one that paid off in powerful earned media for its humor and novelty. It didn’t hurt that Maloney & Porcelli was prepared to take a few risks. “This is America,” said Webster. “Cease and desists happen.”

Brian Schultz, a partner at Magnetic Collaborative, also sang the virtues of experiential campaigns, but cautioned that stunts aren’t for everyone. “Give people something to share,” he said. “Don’t jump into crowded pools.” Because, first and foremost, brands need to know the story they want to tell, which is going to determine how, exactly, that story gets told.

“What is the one thing you want to communicate to your customers?” asked Jean Ellen Cowgill, president of Atlantic Media Strategies. “Lines are blurring between what it means to be a media company and not.” Which means that brands have the license, now more than ever, to be content creators.

Explainer journalism has recently flourished, she noted, pointing out a path that brands should consider taking. “Startups today aren’t distinguished by the what, but by the how. What is the specific piece of knowledge I need right now?” said Cowgill. “There is this rise of content, community and commerce, coming together in a beautifully formatted way.”