This year’s Digiday Media Awards Europe winners proved just how successful video has become as a medium for brands. For each, video was the star in their winning campaigns, though the ways in which they employed the medium certainly varied.

Amazon Prime Video UK secured three wins for its ‘Just So You Know’ campaign — Best Video Campaign, Best Use of Social and the especially crowded Best Use of Video.

Amazon Prime Video UK was inspired by season two of Prime Video’s hit TV show, ‘Modern Love’ and created the UK’s first-ever Amazon-TikTok original series, ‘Just So You Know.’ Rather than using traditional celebrities, this show utilized modern talent and told love stories of a new generation, with the series being directed, written, and the soundtrack composed by three outstanding LGBTQ+ contributors. The original series demonstrated Prime Video UK’s storytelling ability while shining a spotlight on the LGBTQ+ community and the love stories they are so rarely able to share. And, with 14% of TikTok users defining themselves as LGBTQ+ and 75% of users saying the platform is a place where they can openly express themselves, it was a no-brainer that TikTok was the place for this series.

Continuing with the theme of using video and social media to highlight the LGBTQ+ community, PinkNews secured two wins this year for Publisher of the Year and Publishing Executive of the Year.

As the world’s most-watched and read LGBTQ+ media brand, producing authentic content and highlighting the diversity of the entire LGBTQ+ spectrum is central to PinkNews’ mission. Throughout 2021, the media brand delivered unparalleled reporting on HIV/AIDS, transgender rights and the Taliban takeover of Afghanistan. Its production team rapidly grew to accommodate new video series across Snapchat as well as branching out to YouTube and TikTok.

And with its Publishing Executive of the Year win, Sarah Watson, director of product, has allowed the media brand to gain a deeper understanding of its audience and personalize its interactions with users. Sarah laid the groundwork for meaningful engagement with PinkNews’ readers as the publication continues to inform, inspire change and empower its audience to be themselves.

VGTV also had a successful year, with its ‘Give me all the details’ podcast and subsequent spin-offs securing two wins, one for Most Engaged Community and another for Best Subscription or Membership Product.

As the team behind the video for the biggest newspaper in Norway, VGTV identified a lack of well-produced content for Gen Z and hired influencer Linnéa Myhre to help change that. Together they produced a true-crime style entertainment and celebrity update podcast that quickly became popular, raking in 60,000 downloads a week with 70% of the audience between the ages of 25 and 34. After this success, VGTV explored spin-offs, the first was a coffee table book with extra podcast material — launching to the bestseller list upon release — the next was a subscription-based TV series where Linnéa invited six bloggers to a castle to have them open up about their careers and celebrity lives. The subscription program was a hit, with 91% of the subscriptions coming from women, compared to the typical 40%.

The team at ITV News also secured two wins this year for Best Story and Journalist of the Year.

ITV News, the biggest commercial provider of news in the UK, had a big story they held onto with much legal consideration and due diligence taken before breaking the news. The team had a leaked video of someone joking about a holiday party being thrown during lockdown but waited for staff at that company to confirm or deny it before moving forward. As denial after denial emerged, the ITV News team knew what they had was valuable and crafted a campaign to ensure the publisher retained ownership of the story and that the story would gain as much impact as possible. To best accomplish this, they centered the social strategy around teasing the leaked video to then drive people to the ITV News site to see the full video and read the article.

The journalist who broke this story, Paul Brand, received Journalist of the Year for his commitment to reporting on and uncovering the biggest national stories throughout the year, providing analysis and context for major domestic issues as well as new details and angles that change the narrative to frame the perspective through which these stories are seen.

Explore all the winners of the 2022 Digiday Media Awards Europe below — including a quick rundown of the campaigns and insights into why they won and what marketing teams can learn from them. Download the complete guide here. 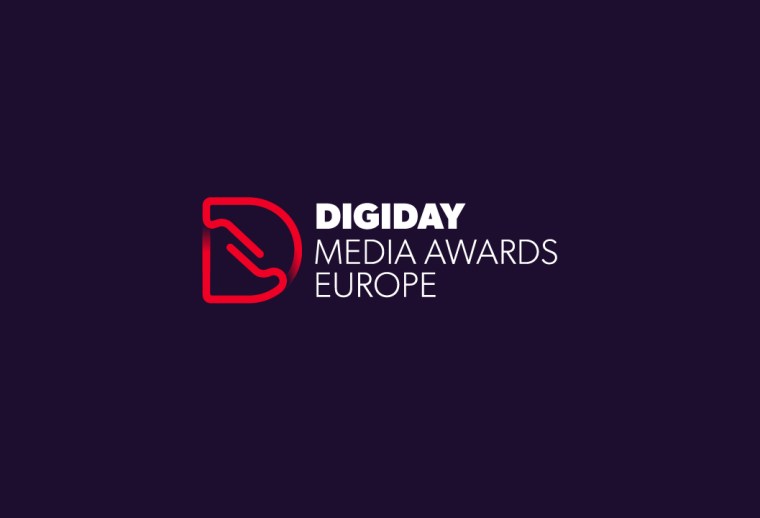 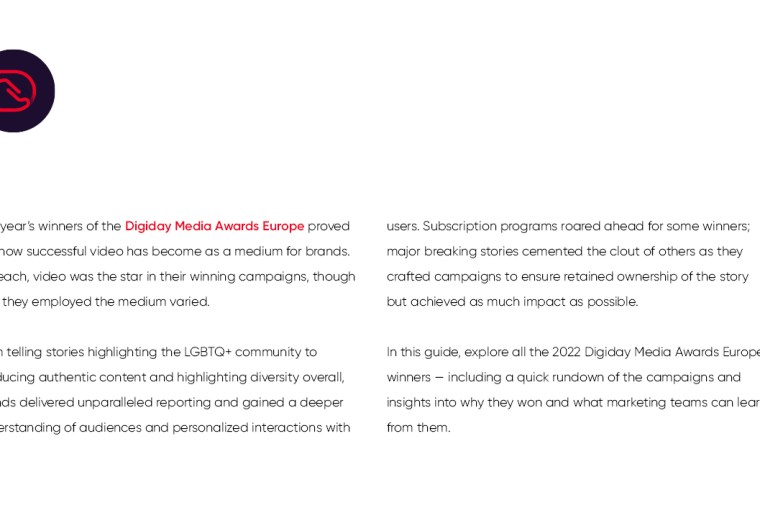 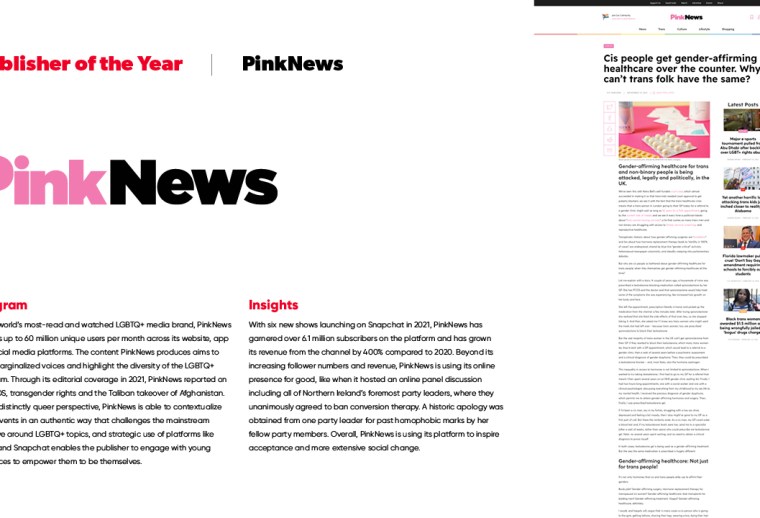 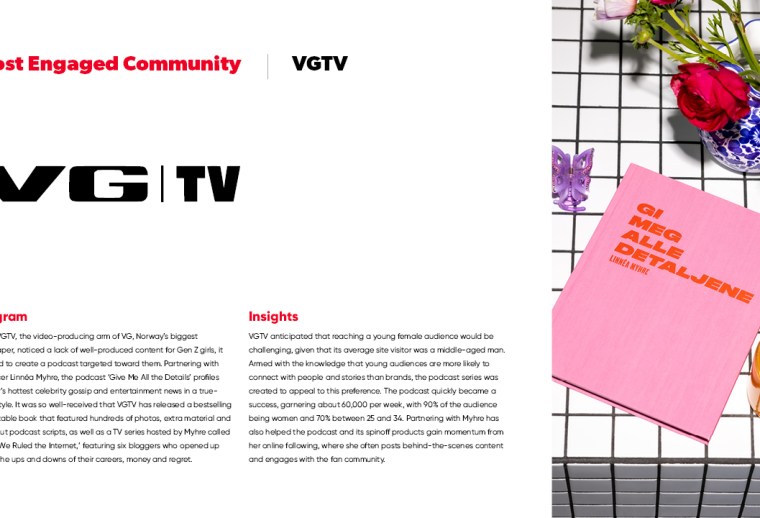 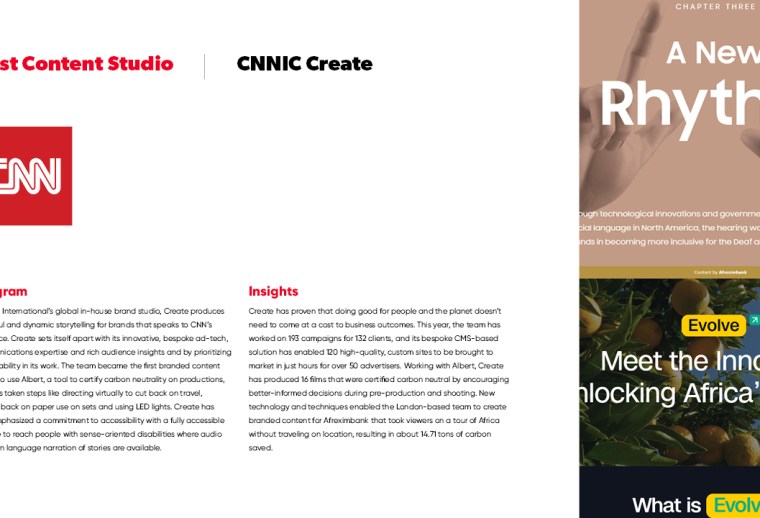 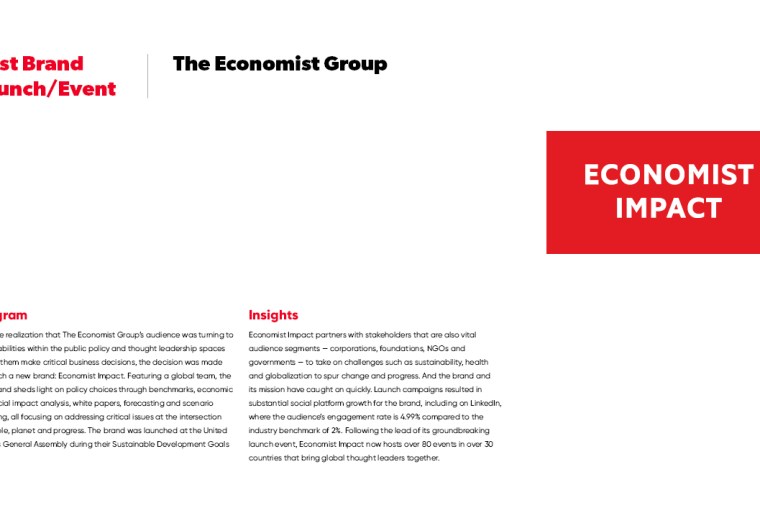 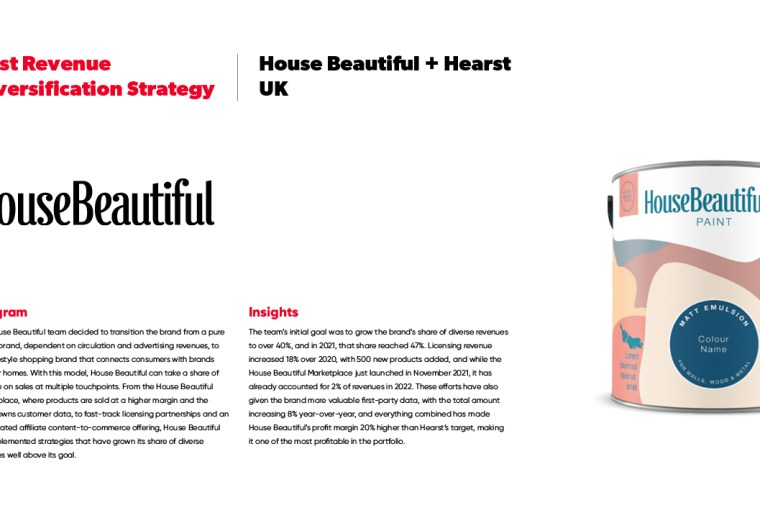 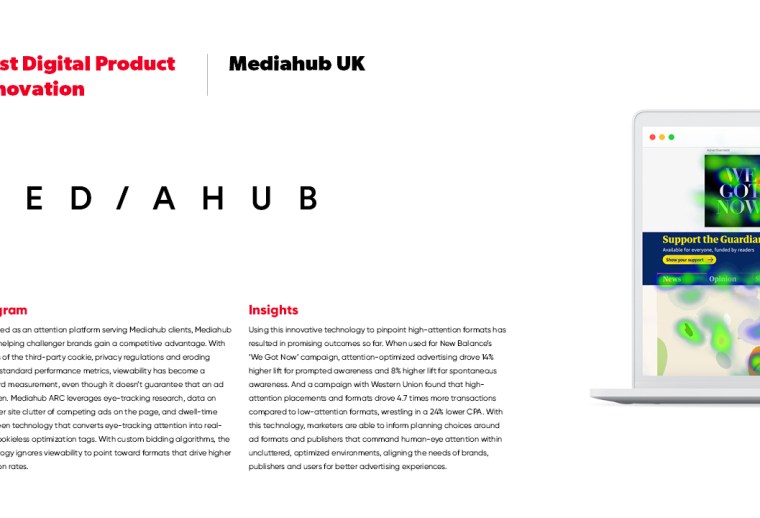 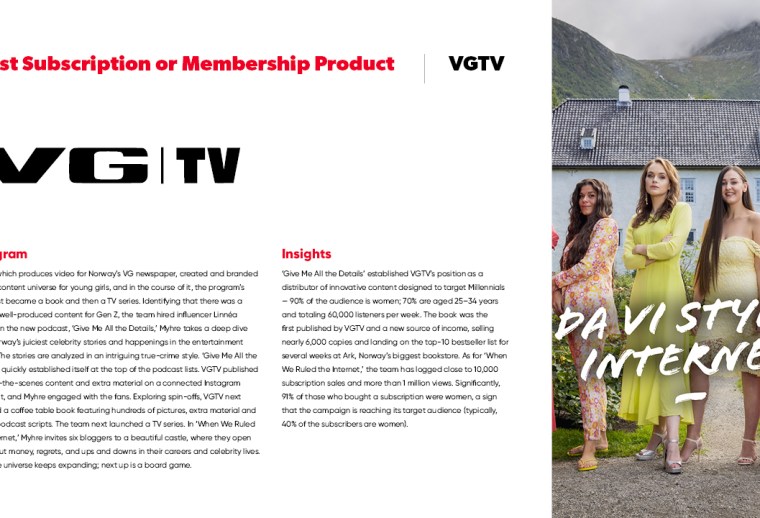 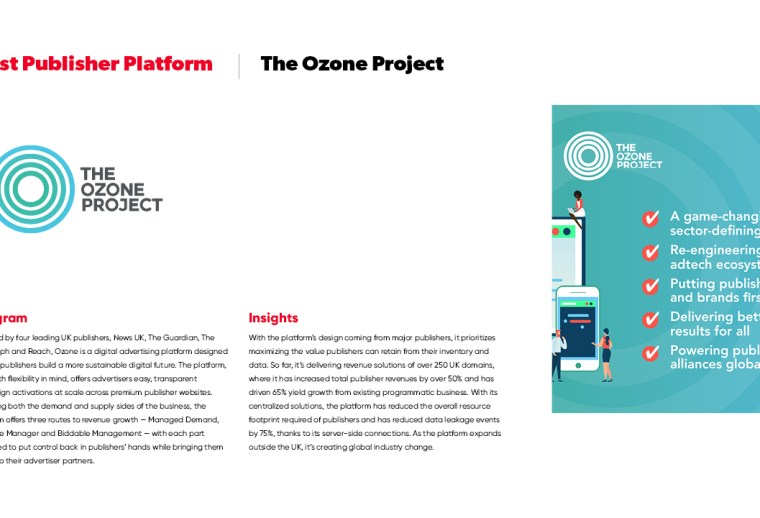 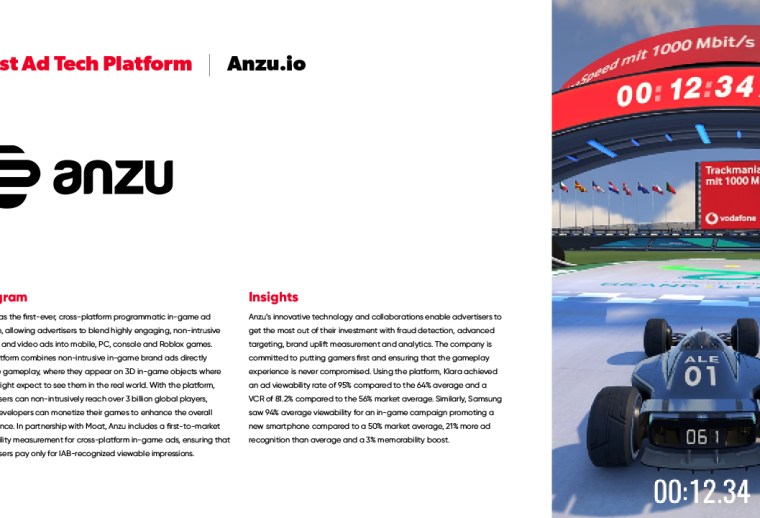 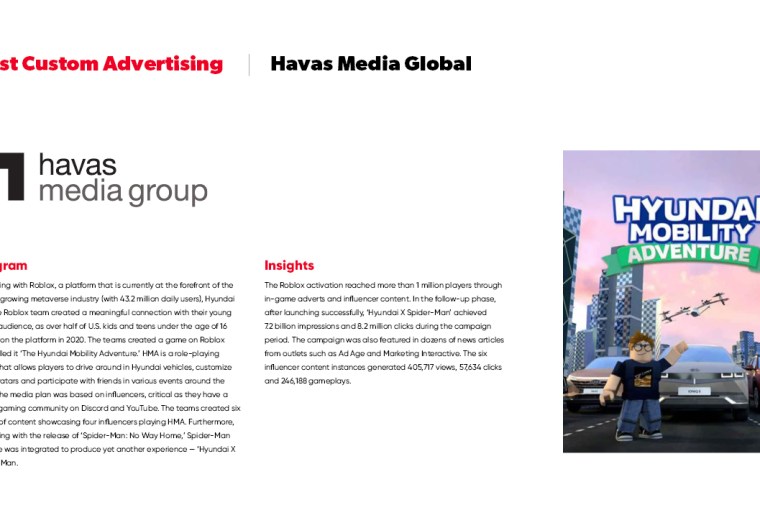 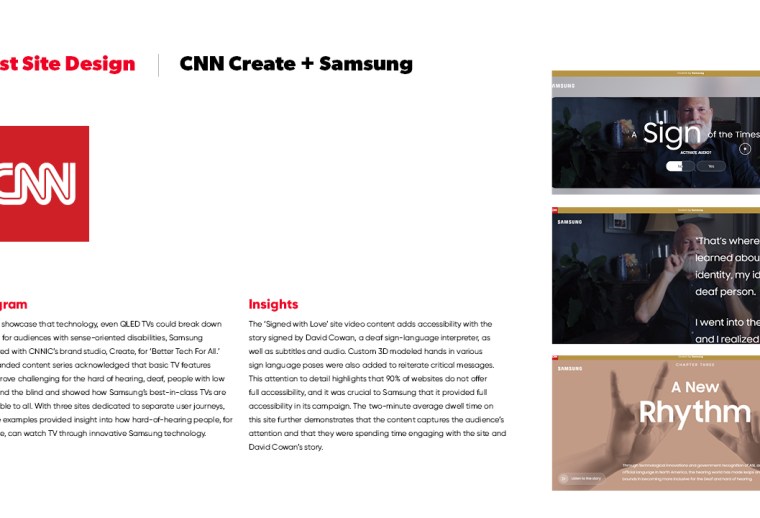 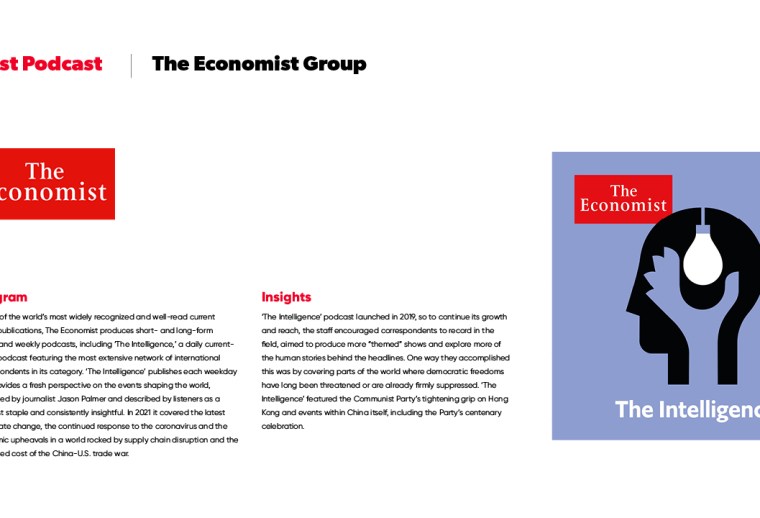 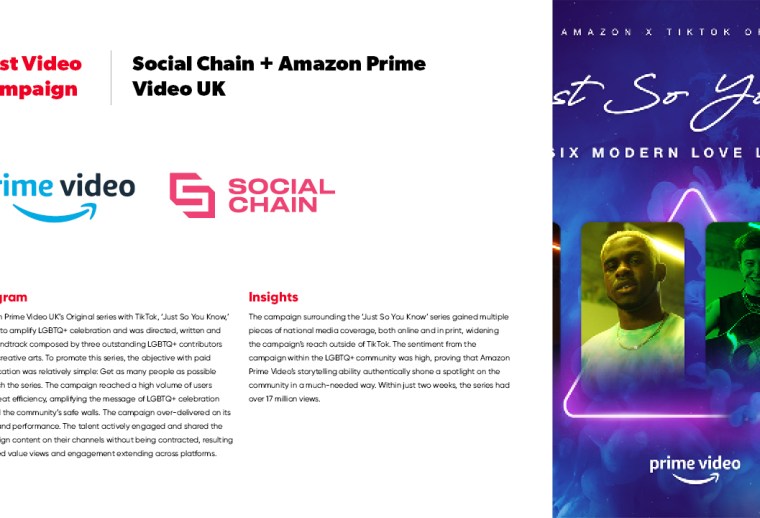 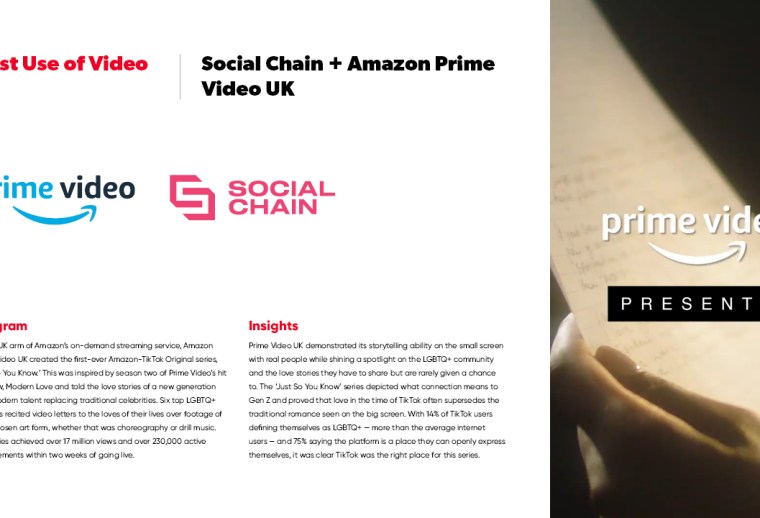 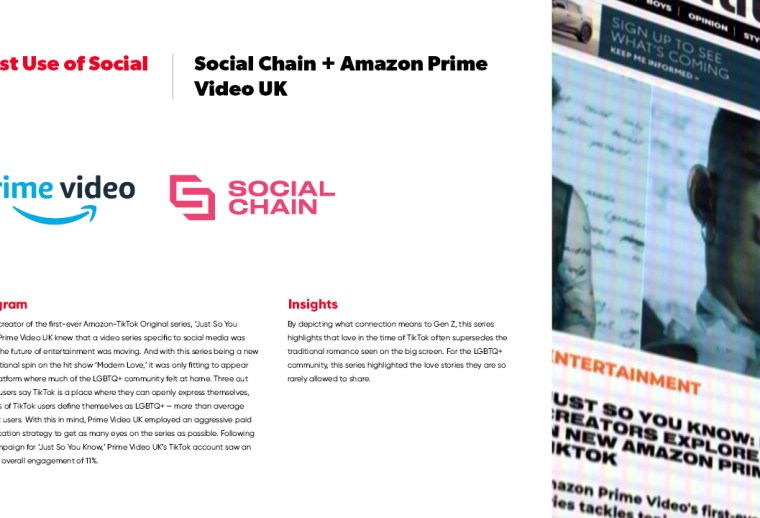 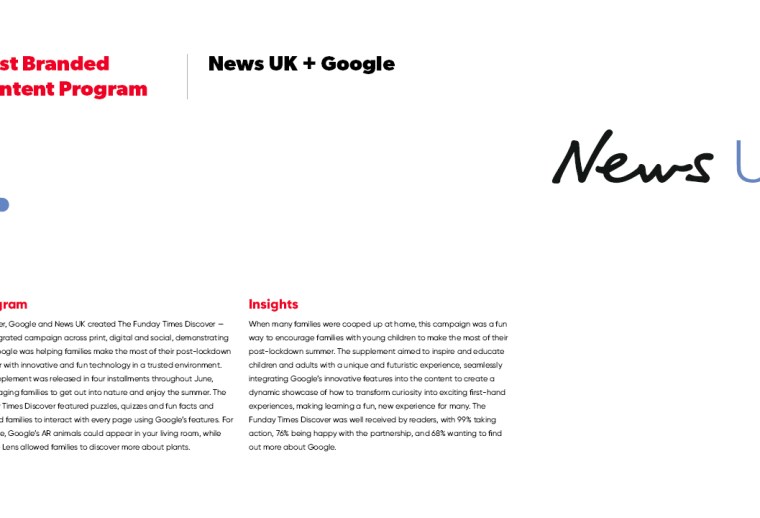 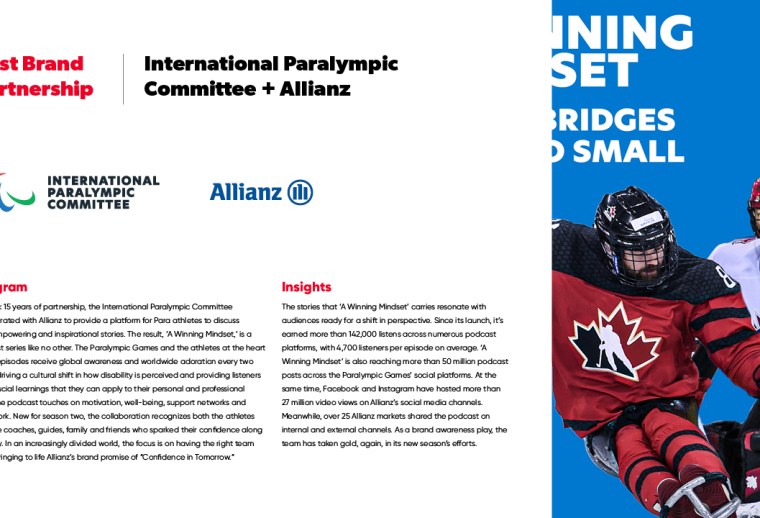 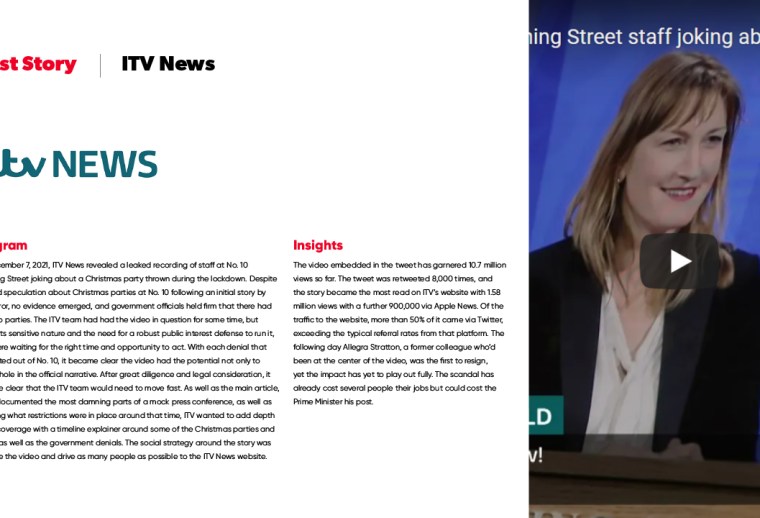 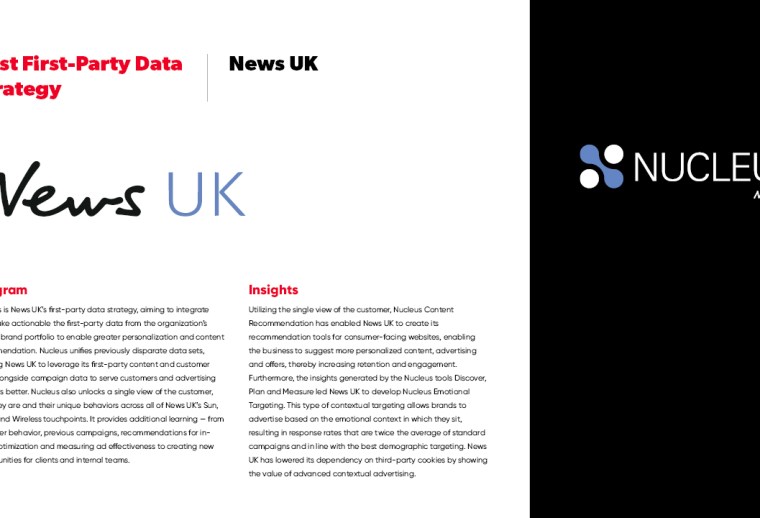 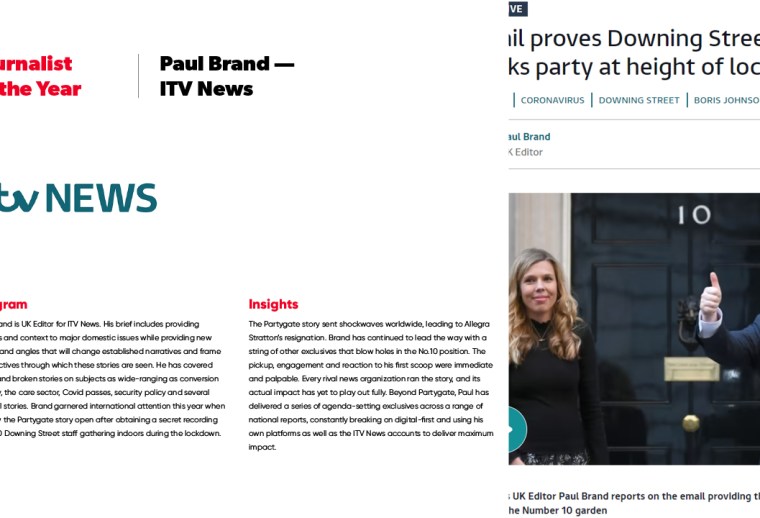 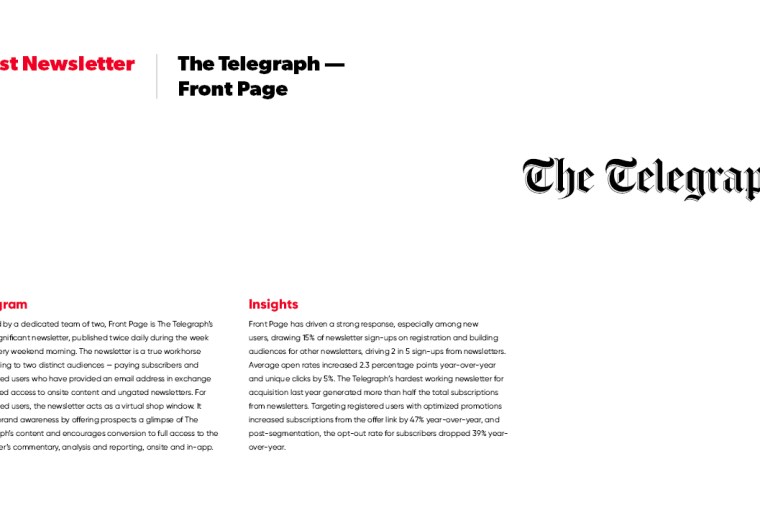 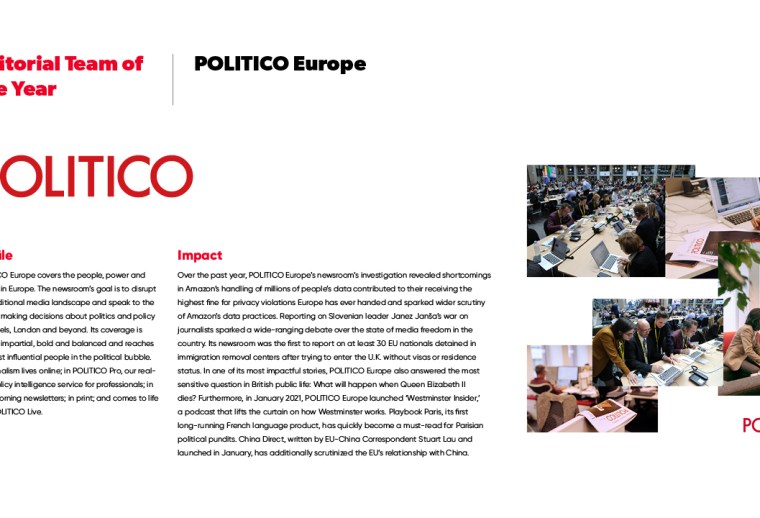 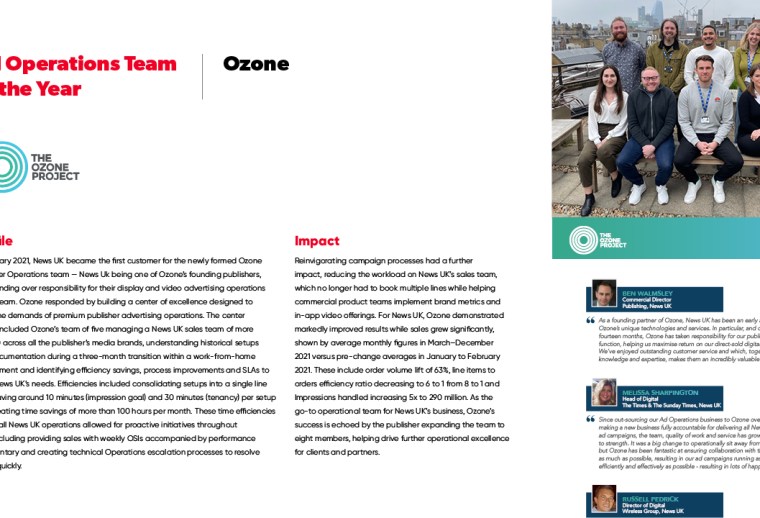 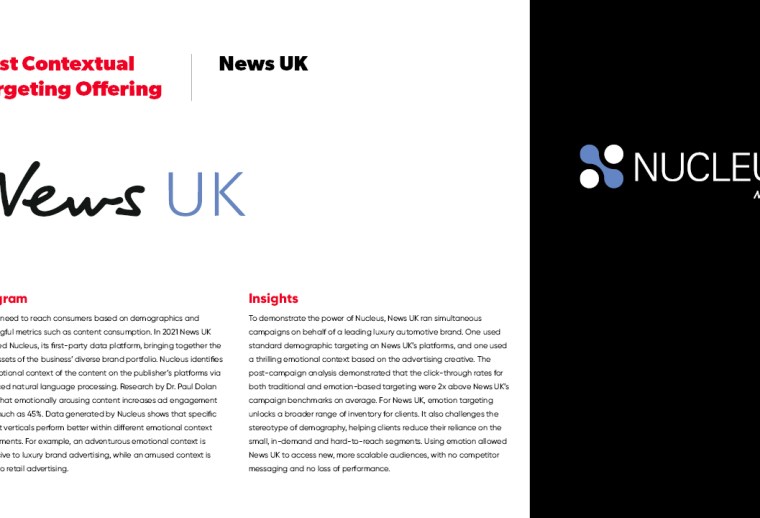 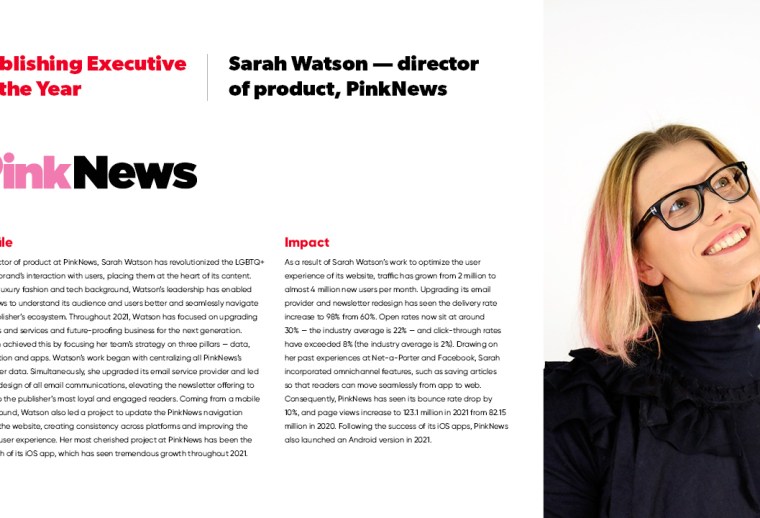 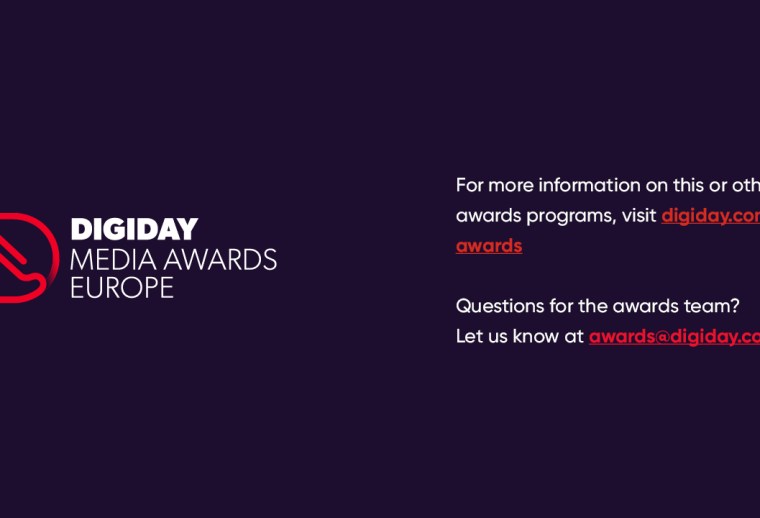 Ad Operations Team of the Year

Editorial Team of the Year

Journalist of the Year

Publisher of the Year

Publishing Executive of the Year