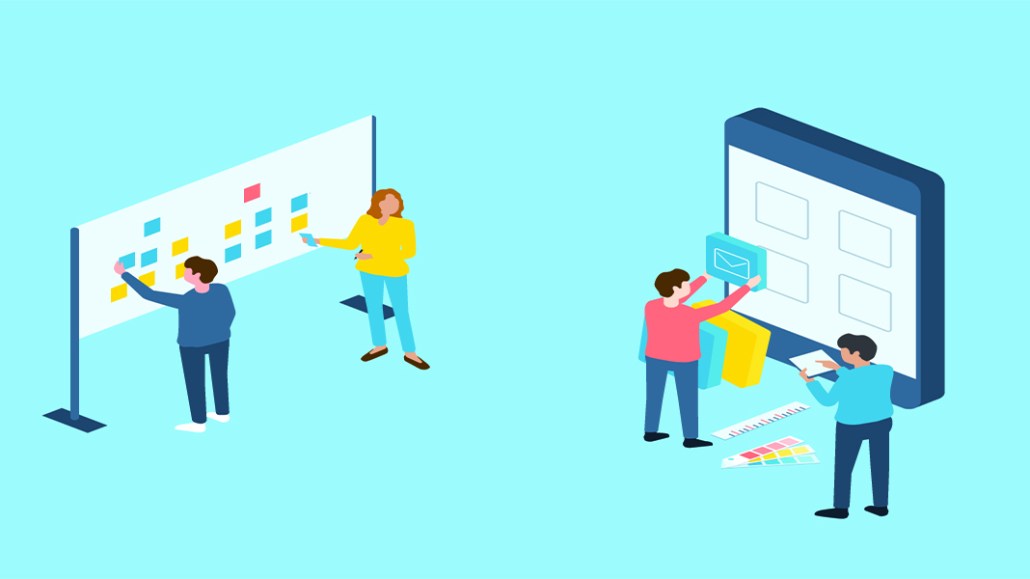 There’s likely a problem with your creative content process, if you’re like the respondents in a recent survey conducted by Digiday and OpenText Hightail.

Several creative collaboration challenges emerged from the survey of about 200 brand marketers, agencies and publishers. But all is not lost if organizations are willing to take a good, long look at where their processes are broken — and then take the daunting, but necessary, measures to fix them.

Too many rounds, and with too many people
One key insight that emerged from the survey was that there are too many “cooks in the kitchen” when it comes to collaborating on creative content. As many as 74 percent of the respondents said they work with five or more departments on developing creative assets — while 32 percent said they also work with external agencies.

And having so many individuals involved in the creative review process is clearly causing issues, with 79 percent saying that has been a contributing factor when deadlines are missed.

Not only are there too many people, but there are also too many rounds of creative review, according to 84 percent of respondents.

“The routing process is a dense jungle — a morass of sharing feedback, editing and approvals from countless internal parties,” according to the survey report.

Not so easy step 1: Ask yourself: Does the review process really need that many people and that many rounds? The “good, long look” will likely lead to “no.” Only involve the people who are familiar with what your project is trying to accomplish, as well as those that have the creative skillset to get that done. Limiting the feedback to critical stakeholders only can help things move more quickly — and likely can also help reduce the number of creative review rounds.

Not enough time, money or resources
The ever-increasing number of mediums that creative content is needed for and the need to keep up with, and even surpass, competitors across those mediums are likely among the reasons that 88 percent of respondents say that demands for creative assets have increased at least somewhat within the past year. But how can they keep up, when 82 percent said they have somewhat fewer resources than necessary to meet such demands?

Not-so-easy step 2: The obvious answer here, of course, would be to provide the time, money and resources to get the work done. More realistically speaking though, it might be time to reassess how deadlines are being decided upon. Are they taking into account other projects that are being worked on simultaneously? With most respondents reporting not having enough resources to keep up with increasing demand, optimization is key. Is talent being allocated in the best possible way for each project? Would someone be a better fit for a video project vs. the creation of a convention booth, for example? There are also great tools out there that can help you optimize your time, money and most importantly, team other resources — as long as they’re used correctly.

Not using tools and processes the right way
Something definitely needs to change when it comes to creative asset production and review processes. An astounding 80 percent of respondents say they are at least somewhat dissatisfied with their companies’ current processes.

And the tools being used for those processes are contributing to that dissatisfaction, with 78 percent citing “confusing or inefficient use of collaboration tools” as a moderate problem and 83 percent saying their organization’s use of such tools makes collaboration and communication more complicated.

Not-so-easy step 3: Another good, long look might be required to determine what your team is trying to accomplish, and how your current tools or processes might actually be hindering them. Do they need so many tools, or is it causing more angst to switch between them? Using tools with overlapping, yet somewhat separate functionalities, could be causing both redundancies and inefficiencies. Is there a way to get everything accomplished with one creative collaboration tool?

As for processes, how many are actually really necessary? Does every single thing really need to be documented the way it currently is, for example, or is that just a paper trail that nobody ever looks at?

Perhaps one of the more troubling revelations that came from the survey is that while creative collaboration should be about being “creative,” 81 percent said that cumbersome, creative processes are causing the quality of their creative work to suffer because other considerations inevitably wind up being prioritized. The need for increased productivity shouldn’t be the enemy of creativity. The report outlines the need for streamlined processes, tools, resources, number of people involved and number of creative rounds — but it’s up to us to ensure that happens, and keep the “creative” in creative collaboration.

https://digiday.com/?p=349903
Most Read
Trending in
Explore More from Digiday Media