Who’s winning coverage of the elections, in three charts

No one can resist a train wreck. Even one that unfolds in slow motion over the course of 18 months, online, on television and on every other media platform out there.

As such, political sites, which have been covering the 2016 presidential race the most doggedly, have all seen dramatic jumps in traffic over the past year, despite two Facebook algorithm changes designed to downgrade the quick-hit, provocative posts that most politics sites rely on. Some sites, like CNN, have shown big traffic gains, while others, like Drudge Report, have barely capitalized at all. Here are three charts that unpack the winners and losers over the past six months through the July conventions:

On the trail
Virtually everybody got a healthy lift during March, a month when 29 states held Republican primaries, but Politico in particular saw its traffic swell 40 percent between February and March, to more than 21 million unique visitors. Fox News Politics gained more than 27 percent, to nearly 20 million (all numbers are from comScore). 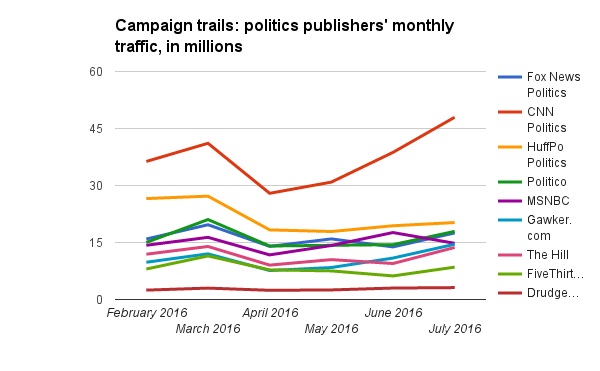 But after the scrum that is Super Tuesday (held on March 1 this year) and the carnage of four debates — two Republican, two Democrat — few sites got much lift in the months leading up to the two conventions.

In fact, most sites had their traffic dip to multi-month lows in the following months. That reversed a six-month trend that had seen politics publishers (and publishers in general) making major hay by publishing stories inside Facebook, via Facebook Instant Articles. At the beginning of the year, political news sites were trending upward.

After the tumble, traffic at a number of publishers, including Politico, Fox News Politics and FiveThirtyEight, was close to flat over the next three months.

Anything but conventional
The July conventions drove gains almost across the board, as publishers sent hordes of reporters to Cleveland and then to Philadelphia for coverage, both the traditional kind as well as for experiments in live video and even virtual reality. (MSNBC TV experienced a slight decline, with visitors falling from over 17 million to around 14 million.) 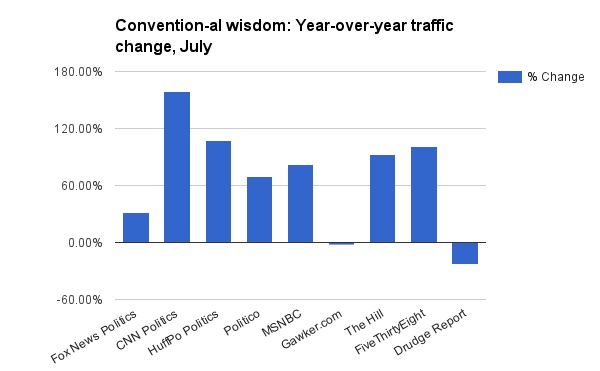 While most of the measured sites spiked more than 50 percent year-over-year, traffic actually declined at two sites. Gawker, still trying to be kinder and gentler, and preparing for an auction of its parent company, saw traffic slip about 2 percent, according to comScore.

Drudge Report, which has been mired in a traffic lull for most of the year, tumbled 24 percent. Drudge did not respond to a request for comment. 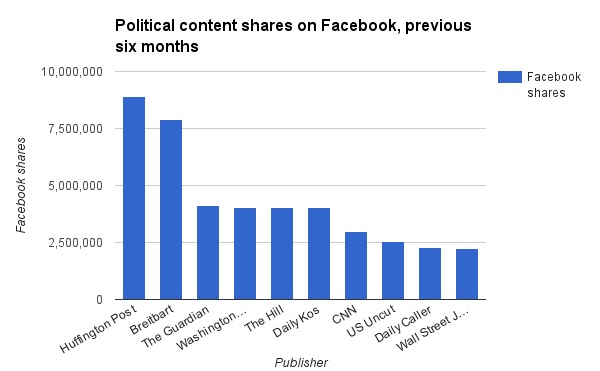 According to NewsWhip, political content produced by the top publishers has been shared some 59 million times over the past six months, with The Huffington Post and Breitbart dominating share counts. Breitbart, in particular, punched above its weight; its Facebook page has a far smaller audience, at about 2 million fans, than HuffPost, which has more than 8 million followers, The Guardian (also over 8 million) or The Washington Post (4 million).

The upcoming debates (assuming Trump participates in them) are likely to be another traffic bonanza for this group. Whether the biggest leaps appear in comScore, inside Facebook’s video view counter or on Snapchat, remains to be seen.