Advertisers may complain that it’s hard to scale native ads, but they also want them to be put in front of the right people. Efficiency can mean more than one thing.

The Washington Post believes it has found the solution in its own newsroom, of all places. The newspaper’s data wonks built a tool called Clavis (“key” in Latin) that recommends articles to readers based on an analysis of keywords and phrases in their reading history. Clavis was inspired by the product-recommendation engine used by Amazon (whose founder Jeff Bezos bought the Post in 2013), and it powers “The Post Recommends” widget that appear at the bottom of article pages.

Jed Hartman, chief revenue officer for the Post, saw how ad sales could adopt Clavis to bring targeting to its native ad offering, which is called BrandConnect.

“I saw campaigns run that didn’t get the KPI the Washington Post was hoping for,” he said. “I used to call it a post-and-pray strategy. You post it, and you pray your audience clicks and reads it. A lot of time, you’re getting low-engaged audiences, and that’s not a great use of the investment.” 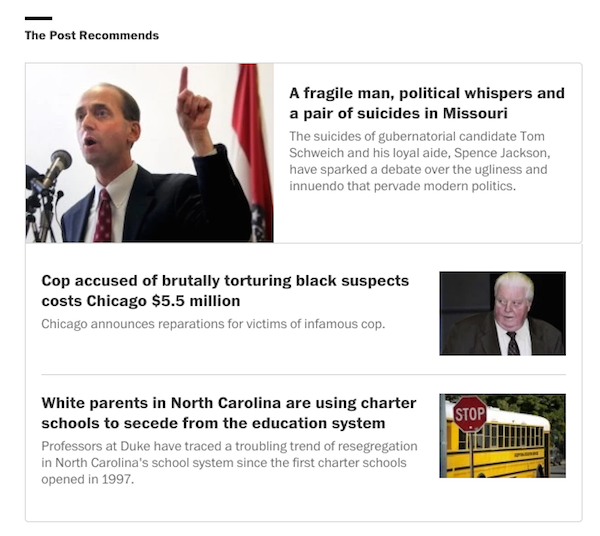 Now, with native, the Post is combining readers’ browsing history with third-party data to build audience segments based on readers’ areas of interest. The product, called BrandConnect Intelligence, then matches native ads with people who are likely to be interested in that topic, regardless of what section of the site they’re visiting.

The Post is pitching the product widely and has three advertisers using it. One that was willing to speak on the record is AMD, a semiconductor company that powers computers and consoles. AMD used native ads in the Post like this one to promote its association with virtual reality. 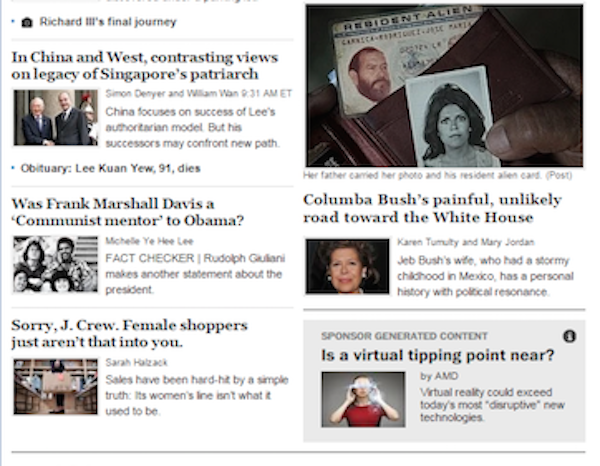 Kimberly Storin, director of global brand and corporate marketing at AMD, said the marketer chose the Post for its ability to reach gamers and influential IT decision-makers. “It really gives us the ability to target specific users who would be excited about the idea of virtual reality,” she said. “Their technology allowed us to do that.”

“We’ve seen the proof of what it’s done for our journalism,” he said. “This gives us the confidence it will work with other content creators.”

Todd Sawicki, CEO of Zemanta, a demand-side platform for native ads, said advertisers want the same targeting abilities for native that they have for other ad formats, and as targeting helps native perform better, advertisers will put more dollars behind it. “It’s rare people are creating for the mass market,” he said. “It’s absolutely the future. For native to scale, budget-wise, you need targeting infrastructure.”

But where the Post may fall short is that it’s only selling BrandConnect Intelligence through its direct salespeople. Sawicki said programmatic is a crucial ingredient for native to get broad enough distribution.

BrandConnect Intelligence also by definition limits the reach a campaign will get at a time when many advertisers are frustrated with native’s limited ability to scale. But some also are looking to tie native ads to business results, and that’s where better targeting can help.

As AMD’s Storin said, while scale still has a place in her company’s overall marketing plans, “the thing that’s really compelling to me is getting in front of the right people. I’d rather get in front of 10,000 people who care about what we’re doing and may be qualified than 10 million people who see a headline and don’t care.”