How the news upstarts covered ISIS

The rallying cry for those bemoaning the demise of newspapers was, “Without The New York Times, who would cover Iraq?” Well, quite a few places, it turns out.

As traditional media companies have scaled back their foreign bureaus, newer news organizations like Vice and BuzzFeed have expanded their mandate to fill the void. (Not included in this review is Global Post, the online startup that James Foley worked for, since it started with the express purpose of covering foreign news.) But can a bunch of relatively small upstarts cover the world’s hot spots? ISIS, one of the year’s biggest stories, is as good a test case as any to see how five have been doing it.

“It used to be, you had to go to The New York Times” to read foreign news, said Joshua Benton, Nieman Journalism Lab director. “Social blurs those lines to a certain extent. [The brand] still matters. But lots of things can just be a YouTube video that just blew up.” And if these five are short on resources, they’re not lacking in confidence.

The guerrilla news site that (in)famously got access to secretive North Korea followed it up with an equally outrageous stunt when it sent journalist Medyan Dairieh to go on a ride-along with an ISIS militant. The result was this five-part video documentary series, which is closing in on 9 million views on YouTube. Despite necessary restraints in covering the group (Dairieh rode with its permission, after all), the series was widely cited by The New Yorker, ABC and others.

“We’re showing you what’s going on there,” Kevin Sutcliffe, Vice’s head of news programming in Europe, told The Huffington Post. “At the moment, we think he’s the only person they’ve let in for this amount of time.”

BuzzFeed
Also not lacking in confidence is BuzzFeed, which has expanded its coverage beyond viral listicles and now has six foreign correspondents. Two of them, Mike Giglio and Sheera Frenkel, have been primarily responsible for the ISIS coverage, which has ranged from breaking news to profiles to image-driven posts. This profile of the first American suicide bomber in Syria got about 300,000 views, per BuzzFeed. 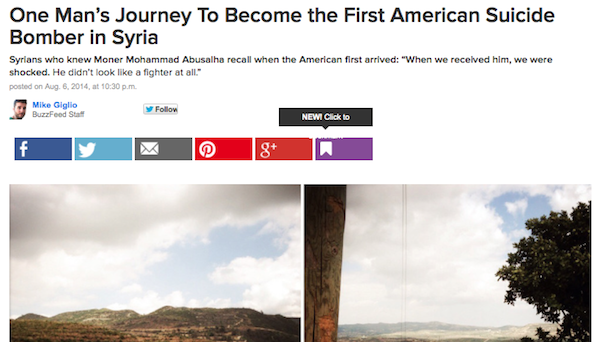 Security issues nothwithstanding (BuzzFeed uses a security consultant to ensure the journalists’ safety), editor-in-chief Ben Smith said the site is deeply committed to foreign coverage, with plans to double its foreign staff over the next few months. “I think if you ask people who care deeply about foreign news, they’re reading our news,” he said. “The nature of the Web now is, great stories travel virally on their own and boring stories from traditional publications go nowhere.”

Mashable
Under editor Jim Roberts, the 9-year-old site also has been broadening its coverage mandate beyond its social media and tech news roots. Louise Roug, who came on in June as global news editor, comes with experience in Iraq that helped prepare Mashable when things heated up with ISIS. Mashable has yet to deploy anyone in Iraq, relying instead on two New York-based reporters, Lorenzo Franceschi-Biccierai and Colin Daileda, plus a network of freelancers. 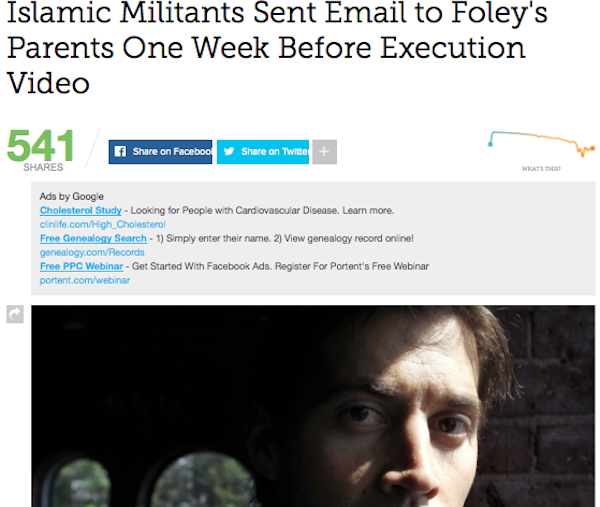 Mashable’s approach has been to cover the story through its social media lens, resulting in stories like this one, “U.S. Intelligence Officials Want ISIL Fighters to Keep Tweeting,” which got a relatively high number of shares (3,200). “We have many fewer resources than, say, The New York Times,” said Roug, “but the way we covered Foley completely held up.”

IBTimes
Under Peter Goodman, the little-known International Business Times has been staffing up with the goal of becoming a “truly global publication.” Goodman said he’s been focused on Syria since his hire in March. Soon after, he hired Erin Banco, an Arabic-speaking reporter, whom he sent to Iraq to report for 10 days. With no dedicated Mideast correspondent (yet), IBTimes is covering the story from the U.S. using its breaking and continuous news teams. The result is a mix of breaking news like this one, which got 23,000 page views; explainers like this one that got 37,000 page views; and infographics. 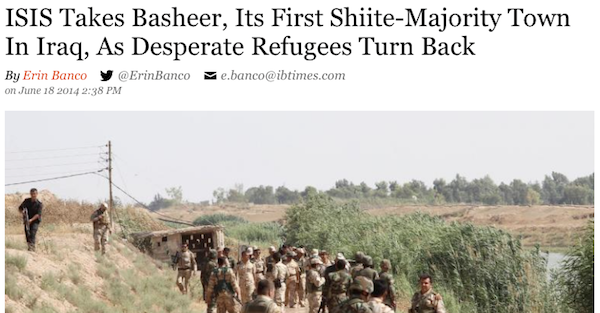 “This story has signaled to people paying attention that we’re one of a handful of Web publications that’s serious about covering the Middle East,” Goodman said. “A lot of serious people are now reading our stuff and tweeting our stuff. I do think ISIS played a big role.”

Vocativ
Vocativ has made so-called deep-Web reporting its calling card, so when its analysts, who work alongside reporters, noticed ISIS releasing monthly reports in online forums on their activities, it started cataloguing and analyzing them over three weeks. The resulting story has gotten 500,000 views, per the site. 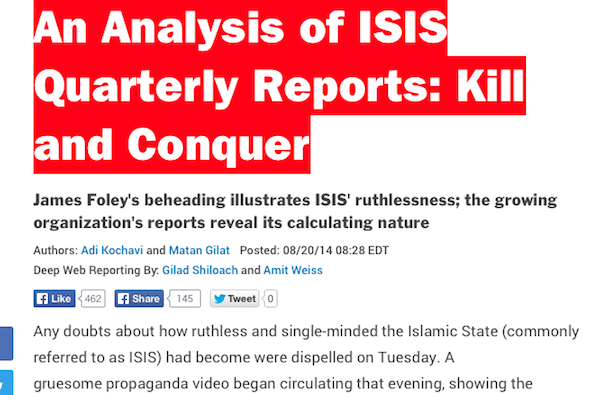 Vocativ, which also is rife with posts like this Prancersize lady “exclusive” and a swimsuit slideshow, is clearly hoping the ISIS coverage will help establish it as a credible news site. “It’s a validation of the long-term work that we do,” said Markham Nolan, Vocativ’s managing editor. “The fact we’ve covered [ISIS] well has been good for us. It makes Vocativ look a little more dark and serious. But serious isn’t a bad thing. If that gives us credibility, great.”