‘There’s been a mindset change’: Legacy publishers are catching up

Digital-native publishers like to crow about how being born on the Web gives them an advantage over their slower legacy counterparts. But when it comes to audience growth, many of those older brands have adopted the dark arts of audience development, which they’re using to speed up their own growth.

Several legacy publishers have seen big traffic gains over the past year. In November, the most recently available comScore rankings, Wall Street Journal Online was up 47 percent compared to a year ago. Forbes grew 38 percent. Hearst Digital Media was up 45 percent. Condé Nast Digital added 37 percent. CNN was up 22 percent. The Washington Post’s traffic was up 56 percent. This growth comes as some digital publishers have seen their own traffic growth slow down or stop altogether over the last year. Over the same period, BuzzFeed’s traffic was flat, according to comScore. Gawker Media’s was down 16 percent.

“There was a period where the traditional publishers let the new digital entities make a lot of progress by serving readers in ways the incumbents couldn’t,” said Hearst digital president Troy Young.  “But at this point, there is no functional difference between us and a Vox or Refinery 29 or any other next-gen player when it comes to tech, ad sales or how we create content everyday.”

The growth in audience is a product of legacy publishers getting smarter about what it takes to grow their audiences not only on their their own sites but also on platforms such as Facebook, Snapchat and Twitter. Roughly half of the most popular publishers on Facebook are traditional television and print brands, according to Newswhip, which also found that legacy print brands make up seven of the 10 most-shared sites on the platform. Likewise, half of publishers on Snapchat Discover are incumbent print and TV companies.

“If you’re doing what the startups are doing and you have the brand equity and resources to build and hire, I’m not shocked at all how well some of the older guys are doing,” said Bloomberg Media global head of digital M. Scott Havens, who was former digital svp at Time Inc. 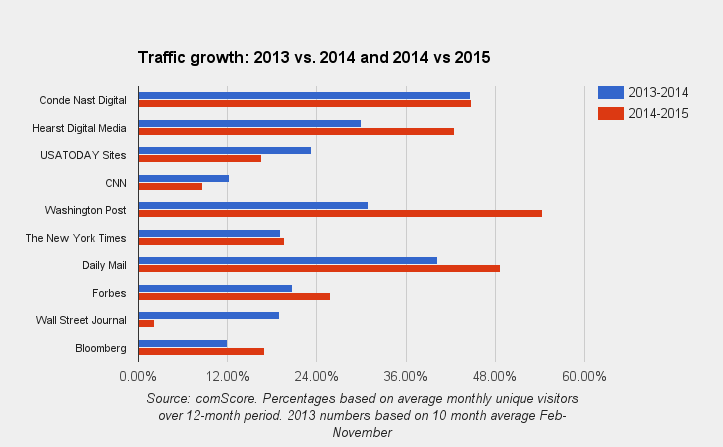 Hiring outside digital talent has helped publishers rethink their approaches overall. The New York Times, for example, last February retired its process for pitching stories to its print front page in favor of a new system built around promotion on digital platforms. The Washington Post, too, has put a stronger emphasis on digital distribution. Last year it became one of the few publishers push all of its content directly on Facebook via Instant Articles.

“There’s been a mindset change, both toward having higher metabolism and a more digital DNA,” said Washington Post publisher Fred Ryan. “Our strategy has been to present content to as many readers as possible on every device and platform, never to any specific one.”

The resurgence of legacy publishers on the Web, in the end, might complicate the value proposition of digital native publishers, whose natural advantages are less obvious once legacy companies adopt their skills (or acquire them entirely). Brands, assumed dead in the age of social, are more important than ever.

“A few years ago people said brands were dead because social media eradicates the need for them, but the reality is that brand does make a difference, because when people have a flood of information and can’t consume it all, they’re going to pick and default to the brands that they know,” said Bloomberg’s Havens.