The Evolution of Slate 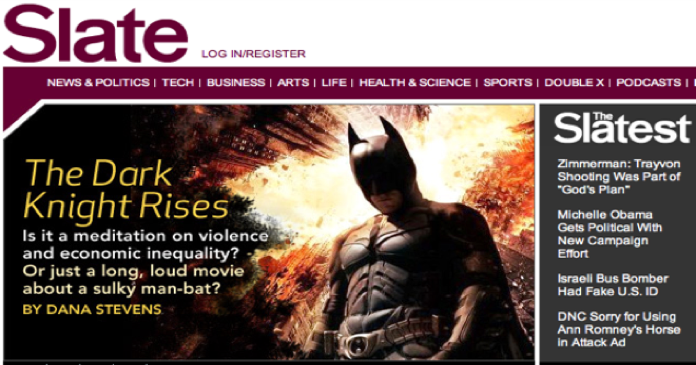 In Internet years, Slate is a gray beard. It debuted in 1996, backed by Microsoft. It was at the forefront of many now-common Web trends. It was ahead of the curation curve with “Today’s Papers” and even experimented with a subscription model in the late 1990s (subscribers got a Slate umbrella). It proved that Web-only publications could produce serious, high-quality journalism.

And yet Slate never quite lived up to the heady expectations of the dot-com era, at least as a business, relying on its protective Microsoft umbrella until 2004, when it was purchased by the Washington Post Company for an estimated $15-20 million.

“In the Microsoft Era, we were always nominally a business,” said current Slate editor David Plotz, who was an assistant editor to founding editor Michael Kinsley. “Now we’re a business.”

In its first iteration, Slate described itself as an online magazine, published once a week and with page numbers. But it began experimentation with new online storytelling vehicles. You could argue that “In Other Magazines,” which debuted in June 1996, was an early forerunner to the type of aggregation that built blogs.

“I’d do it on Sunday,” Plotz said. “I’d get Time and Newsweek to have them fax the issue, and I’d write about what was in these magazines and update during the week.”

But then a curious thing happened. Princess Diana died in 1997 and changed the course of the outlet. Slate, with a down week, missed what was arguably the first big Web-culture story. What’s more, its rival Salon was all over the news.

“We were dry, and we realized we don’t understand the medium,” Plotz said. “We can’t walk away and have a site that functions and is relevant to the conversation.”

The outlet did a 180, changing from a once-a-week publishing schedule to a daily, then twice daily schedule. It launched blogs, such as Mickey Kaus’ Kausfiles and developed some stellar podcasts like the “Culture Gabfest,” which is still successful today.

Slate is now finding its footing as part of The Washington Post Company but apart from The Washington Post. It maintains a strict separation, without so much as sharing content or even ad sales. In this way, Slate is staying true to its indie roots.

“The Washington Post Company is definitely not a helicopter parent,” said Slate publisher John Alderman. “They provide support where needed but allow Slate to retain an independent and entrepreneurial culture and structure. Our core operating elements — editorial, technology, design, sales and marketing, business development — are under the Slate umbrella. We share back-office functions including finance and accounting and some ad operations.”

According to Alderman, more than 90 percent of ad revenue is from directly sold ads, and it uses Google AdExchange to backfill its inventory. It has a sales and marketing team of about 20, with offices in New York City, the Midwest, California and London.*

Slate, which drew 7 million unique users in June, according to ComScore, is firmly a niche-media buy. It has a voice, which appeals to brands, and has a history of innovations on the ad side, like last year’s relationship with Jack Daniels. The liquor company tried to get a national holiday and worked with Slate to highlight some famous Jacks throughout history.

“They should be looking to partner a lot more with The Washington Post,” said Josh Mallalieu, partner of integrated investment at Universal McCann. “They’ve done it in the past; there’s been back and forth in sales structure. From an agency perspective, they seem to be bouncing around a bit. When they land a plan and stay in that position for a period of time, I struggle to see how they evolve beyond  a tactical buy for the short term.

Slate has attempted to follow the trend of moving beyond the banner. It offers advertisers customer creative services to produce articles and video. A current JP Morgan Chase campaign centered on delivering small-business news to Slate readers from within an ad unit.

“On the business side, in the Microsoft Era, we didn’t have much of a business, so not much thought was given to advertising,” Plotz said. “Since we’ve been owned by the Washington Post Company, there’s been a challenging effort to think how advertising works on the Web.”

*UPDATE: According to publisher John Alderman, this year, for the first time in its history, Slate has a dedicated sales operation. Previously, it was a joint operation between the Washington Post and Slate. As result, he says, revenue up 23 percent year-over-year.