Will millennials cough up money for media?

The old saw is that millennials may spend a lot of time-consuming media, but they’re far less likely to spend money on it.

But the latest forecasts complicating that narrative that millennials are media cheapskates loath to open up their wallets for content. Millennials in North America are expected to spend $62 billion on media content in 2015 — $750 per person — according to a new report from Deloitte. Nearly half of that spending will go to paid TV services, followed by music, computer games and movies. Still, media companies are facing an environment that’s far easier for people to find free alternatives.

“There’s no digital equivalent to a hamburger or car, but there is one for a CD or book,” said Deloitte Research director Duncan Stewart. “Media companies are under way more pressure.”

Stewart said he expects millennials decrease how much they spend on paid TV services over the next year as more companies launch and attract more people to their digital video services. The launch of a digital-only HBO Go service and Dish Network’s Sling TV streaming, which unbundles ESPN from the cable package, are clear signs of where the industry is headed. 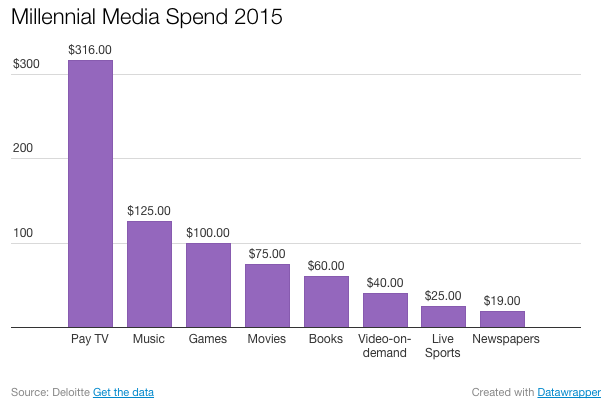 But of the big media formats, newspaper publishers have it the worst: Deloitte projects that the average millennial will pay just $19 on newspapers this year, less than the cost of four Sunday editions of The New York Times. Newspaper companies are also facing a similar money problem on the Web, which is eroding both their advertising revenue and ability to get money directly from readers. And they partially brought that fate upon themselves. “When you have people willing to give their content away for free, charging for it is really hard,” Stewart said.

Deloitte’s projections are just the latest in a long line of attempts to describe and quantify the spending habits of young people, whom analysts and surveys suggest are spending money very differently from previous generations. A recent survey from the Boston Consulting Group (PDF), for example, found that millennials are spending less money perceived as non-essential, such as luxury brands and restaurants, and more money on organic food and other natural products. Millennials are also spending less money on products and more money on experiences, according to a June 2014 survey from Harris Interactive.