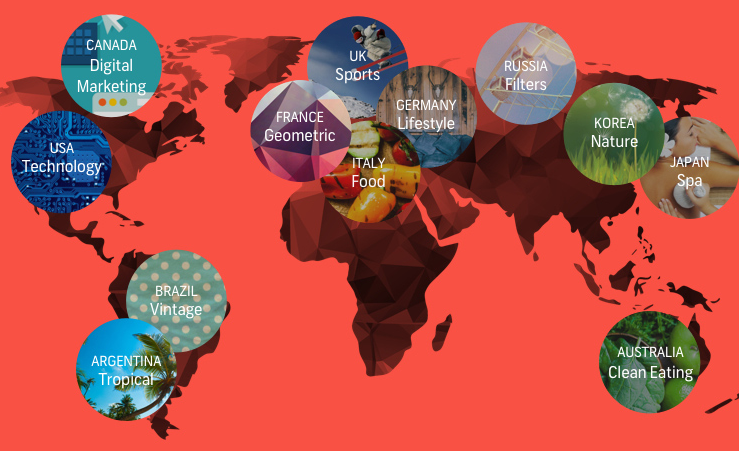 Shutterstock’s repository of stock photos, videos and music makes it an indispensable source for many in the creative industry: designers, art directors publishers and filmmakers are just as apt to deploy Shutterstock images as marketers, advertisers and businesses. And it is its 47 million item-strong database that also enables the company to predict and forecast industry trends.

Shutterstock released its 2015 Creative Trends report Monday, which explores how its photos, video and music are used throughout the world. The big takeaway this year: We’re all hipsters now.

“We’ve been tracking data using our internal tools over the years to see what’s on the rise,” Sarah Maloy, Shutterstock’s content marketing manager, told Digiday. “We also looked toward our in-house design team to identify trends from within the data.”

Pictures with blurred backgrounds, unique perspectives and linear styles were all the rage in 2014. Searches for “blur” increasing by 144 percent over the past year, according to Shutterstock data. The growing affinity for blurred lines was attributed to the popularity of apps like Instagram, which incorporate techniques like blur, deep focus and tilt shift.

Linear style, which is often used to create simple outlined icons in design (like the microphone icon on Apple products) and unique perspectives in photography such as “top views,” followed closely behind in the report.

Shutterstock has also determined which visual trends are making waves in different parts of the world, using an interactive infographic to map the differences. It has grouped together trending keywords under one umbrella “key trend.”

For instance, the top searches in the U.S. were tech-related, with “selfie,” “bitcoin,” “smart watch,” “emoji” and “Internet of things” the most common terms. Koreans, on the other hand, were more likely to search for natural iconography, with “sprout,” “dandelion,” “waves,” “spring” and “summer” leading their searches.

Specific to the design industry, five trends are on the rise going into 2015: “double exposure,” “hipster logo,” “low poly,” “long shadow” and “zentangle.” Zentangle in this case refers to a hand-drawn aesthetic with detailed, almost mathematical patterns. A hipster logo is most commonly found on vintage seals, labels and logos.

Among video trends in 2014, animation dominated with 57,000 searches. Slow motion and aerial videos rounded out the top three, with 35,000 searches each. While commercials, movies and music videos have been employing slow motion lately, the iPhone’s slo-mo feature increased its popularity by putting the technology into everyone’s hands.

Drone technology has meanwhile helped aerial video make huge strides, catapulting it into the list of popular video trends this year. It is often used as the establishing shot for film and television, like FOX’s new drama show “Gotham.”

“We find searches to be almost a better predictor for what’s coming up than downloads,” Maloy said, adding that the list makes it easy to spot what you’ll be seeing more of in the coming year.