With the 2016 presidential race underway in earnest (and sometimes not-so-earnest), it seems everyone has a political action committee, or PAC. Add to that list Twitter.

In a blog post that updated corporate political policies yesterday, the social media company announced that its revamped PAC, originally launched in 2013, is set to make its first-ever federal campaign contributions — which the platform will disclose with tweet-like speed within two days. (Federal law lets PACs wait weeks or months to reveal which candidates they’ve given to.)

“We will conduct our #PAC activities with a high degree of transparency,” Tom Tarantino, Twitter’s public policy manager wrote. “In addition to posting our policies, and FEC reports, we are also committing to post notice of all donations to candidates within 48 hours.”

In an interview with the Center for Public Integrity,Colin Crowell, Twitter’s head of global public policy and a former FCC staffer, said that Twitter’s PAC intends to donate to federal campaigns this election cycle in addition to its lobbying on issues relating to government surveillance reform, digital privacy protection and net neutrality. The platform will disclose its trade association memberships and membership costs, too, as well as any financial associations it has with nonprofit groups like “Rock the Vote.”

“We advocate for our users and customers on issues of freedom of expression, privacy, online safety, net neutrality, and patent reform,” Twitter announced on its new public policy vertical. Last year, Twitter spent $310,000 on lobbying. It has spent $330,000 so far this year, according to the Center for Responsive Politics. It provides a loose breakdown of where that money goes on its new political engagement and transparency page. 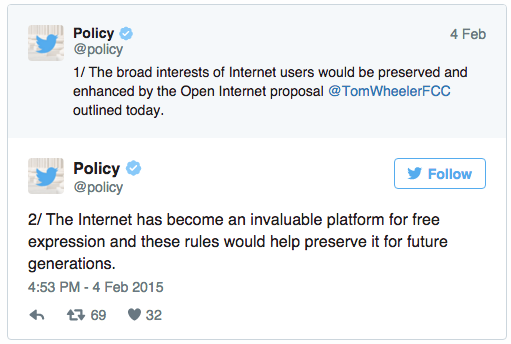 The move comes as co-founder Jack Dorsey has returned as permanent CEO to combat flagging user growth and investor concerns.

But Twitter’s involvement in the election doesn’t stop with campaign funding or lobbying — it extends to teaming up with CBS to co-host a Democratic presidential debate on Nov. 14.