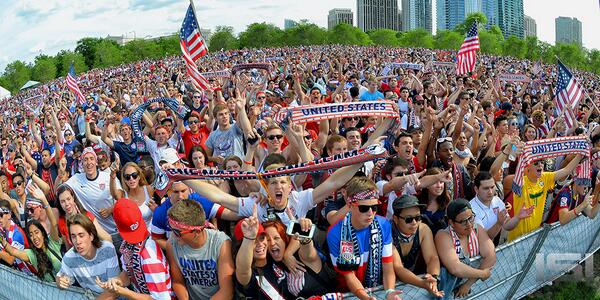 It’s do or die day for the U.S. Men’s National Team as they face off against Belgium in today’s World Cup Match. Unfortunately for workplace productivity, the prognosis is fatal no matter what the outcome of the game is.

Media outlets big and small, for example, will be breaking from work to get in on the action. Frank Bi, a digital news developer and data journalist at PBS’s News Hour, compiled this incredible photo post of newsrooms all over the country congregating around last week’s U.S.-Germany game. (Nice newsroom, NPR.) It’s amazing any journalism got done that day.

And it will be amazing if any happens today. “It CAN grind to a halt,” one mole in the Guardian US newsroom wrote to Digiday. “I expect it to around 4 today especially.”

Time Inc.’s chief technology officer Colin Bodell sent out an email to staffers imploring them not to stream the game today. “When the team played against Germany last week the Time Inc. network was severely impacted by users streaming the game to their local workstations,” he wrote (see the full email at the bottom of this post). “Because network resources were severely degraded, a number of staff within our offices and those connecting to systems within our offices, were negatively impacted.”

Workflow everywhere was “negatively impacted,” it turns out. Quartz posted this handy chart detailing the time spent on conference calls during last week’s U.S.-Germany match. “Call volume (as in the aggregate duration of them, not their loudness) on US-based conference calls provided by InterCall was down 7 percent during last week’s US-Germany match, compared to the seven days before, according to data provided by the company,” Quartz wrote.

Anecdotally, we can confirm the findings: We know of at least three New York agencies that halted work to bond over some fútbol last week. We’ll never know what creative strokes of marketing genius were stifled that fateful day.

Don’t feel guilty if this hits close to home, though. Even our foreign policy is subject to the vagueries of FIFA’s scheduling. “We had elements — which I won’t detail — of our foreign policy that have been shaped around the World Cup,” President Obama told ABC News host George Stephanopoulos. “Phone calls, meetings, initiatives we had to think about.”

In the interest of full disclosure, we should point out that regularly-scheduled digital media and real-time marketing coverage here at Digiday might be light starting at around 4 pm today — and anything after 6 may have been produced under the influence of … World Cup fever.

In the meantime, we may or may not be cooking up a few new epithets for the Belgian team.

Today, the United States soccer team will be playing their next World Cup game against Belgium. When the team played against Germany last week the Time Inc. network was severely impacted by users streaming the game to their local workstations. Because network resources were severely degraded, a number of staff within our offices and those connecting to systems within our offices, were negatively impacted.

While we understand that everyone wants to support the national team, please do not stream the game over the internet to your local workstation. There are conference rooms and pantries located throughout the building that have televisions where the game can be viewed.
Thank you for your understanding and cooperation. Go team USA!
Col