Pet the bunny: How UK agencies are curbing employee stress 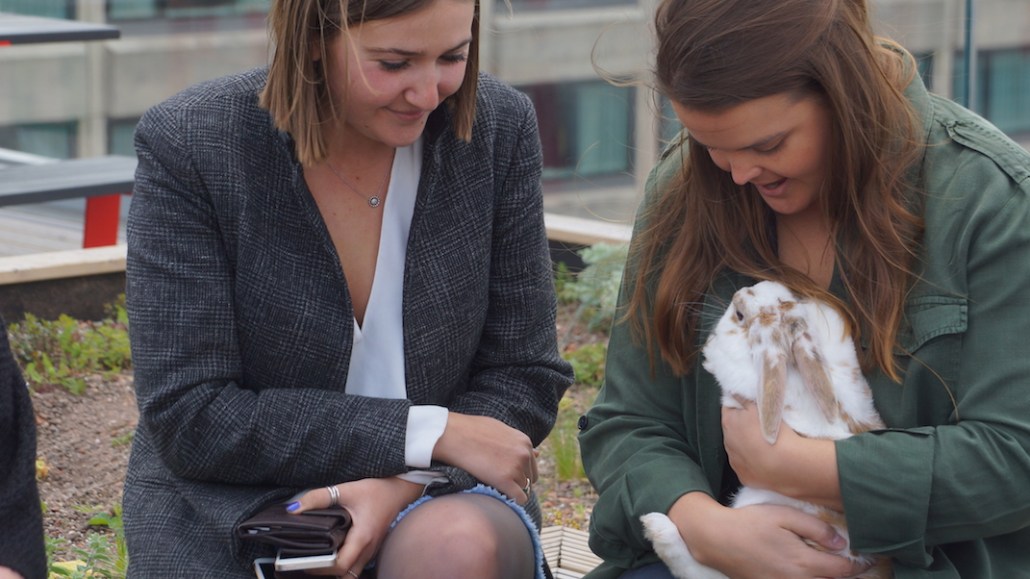 Agency life can be a blur of endless pitches, tight deadlines and other forms of plate spinning on behalf of clients. The global trend, at least outwardly in the face of horrors like the suicide of an agency staffer in Japan blamed on overwork, is to encourage mental well-being. Naturally, agencies are being creative about it, rather than simply making sure people work reasonable, predictable hours.

Given Mental Health Awareness Week wraps up in the U.K. this weekend, we asked a bunch of agencies what incentives they have introduced. Here are some of the best:

Ogilvy’s rooftop rabbit-petting zoo
Furry friends can be a welcome stress-relieving tonic. Dog-friendly offices are now a common sight across London. Ogilvy took an Easter-themed twist on this idea — admittedly after finding that “puppy-petting therapy” services were fully booked — and rented a load of rabbits to set up a petting zoo on the rooftop of its Southwark office.

Employees — all 1,200 of them — were invited up to the pop-up petting zoo, where they could interact with the rabbits. At least half that number showed up at various stages of the day to hang out with the bunnies.

Carat’s tea tastings
Each year, Carat runs 50 courses during Mental Health Awareness Week. In 2016, courses included everything from florist lessons to table tennis tournaments, reflexology and guided walks. This year, the agency will offer reiki, circuit classes and tea tastings. Carat has also begun a monthlong email-abstinence policy, in which employees are asked to refrain from sending emails (both externally and internally) before 8 a.m. and after 7 p.m. on weekdays, and on weekends.

Essence’s #LondonLove month
This month was a particularly frenzied one for Essence, and the agency has pulled out the stops to ensure its staff gets the right support. For six weeks, a rigorous well-being initiative nicknamed #LondonLove internally is running in the London office. It includes everything from running mindfulness sessions during lunch breaks to help people cope with stressful situations to yoga classes in the evening to help people decompress. The offices have stocked up on a truckload of healthy snacks, and employees can choose to go on “lunch and learn” sessions with the agency’s health partner Vitality. At the end of the six weeks, Essence will host a party, and people are encouraged to take time out to celebrate good work being done.

Wieden+Kennedy’s block on early meetings
Wieden+Kennedy has put a hard block on emails being sent to employees after 7 p.m. or on weekends, something it has done throughout the last year. Flexible working hours are taken seriously, and not just for new parents. That means the London office doesn’t allow internal meetings before 10 a.m. or after 4 p.m. And work stops promptly at 4.30 p.m. on Fridays. Each employee also receives a wellness fund.

Helen Andrews, managing director at Wieden+Kennedy London, said agencies have to constantly rethink ways to ensure their staffs don’t get bogged down by today’s always-on tech culture. And being in the office 24/7 isn’t regarded as stimulating for creative output at the agency.

“Email on our phones means we’re always on, extending the time we’re thinking about and doing work even when we’re not in the office,” she said. “It’s also meant we’ve got a lot more to do — responses are quicker and things move faster. Some of that is brilliant. But it also means we can have less time to think. We wanted to put some practical initiatives in place that gave the team more time for deep, creative work while helping protect a better work-life balance.”

Engine’s swear-a-thon
Naturally, when working hard, nerves can get frayed, odd expletive(s) can be yelled and the use of advertising jargon can reach unhealthy levels. Engine is channeling this extra adrenaline with a swear-a-thon to support its client MQ and coincide with Mental Health Awareness Week. This week, anyone that gets caught swearing or using any kind of advertising jargon has paid, literally. Engine also provides an array of incentives for employees like massages, quarterly nutritionist consultations, climbing and life-drawing classes.