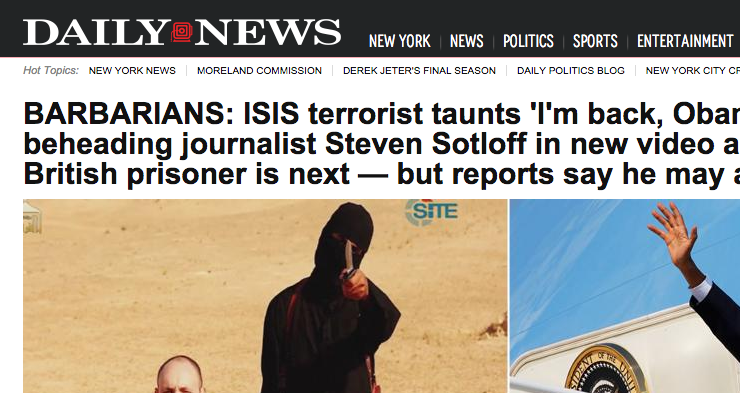 For New Yorkers, the Daily News has been the city’s reigning tabloid. But with print’s future in question, it relaunched its website as a national news destination two years ago, betting that its urban sensibility could play to the rest of the U.S.

The bet seems to be paying off. Daily News desktop unique visitors are up 5 percent to 12.6 million since the site relaunched in July 2012, according to ComScore. Including mobile, traffic is up 6 percent to 27.3 million in the past year, versus flat growth for the news/information category in general. That puts the New York daily ahead of sites like NPR (23 million), MSN News (26 million) and within striking distance of the BBC (27.4 million) and Time.com (32.6 million). In terms of the audience composition, 80 percent of the site’s traffic now comes from outside New York, up from 50 percent.

“Yesterday, the California traffic was 300,000,” Daily News editor in chief Colin Myler said on Tuesday. “The journalism we’re delivering is engaging for an audience outside New York City.”

And while the traffic growth might be cold comfort to the many who have been laid off there in the past couple of years as part of the digital transition, the changes are paying off on the revenue front, too. Driven by the creation of a national sales staff, digital ad revenue is up 30 percent year over year, with new clients including NBC, Kia and HBO, according to Bill Holiber, president and CEO of the paper.

Here are five ways the Daily News has boosted its traffic:

Putting digital first
The Daily News used to be like a lot of news organizations, with separate print and Web teams. Two years ago, Myler hired Ted Young from the Web-savvy Daily Mail. Under Young, the paper created a 24-7 digital news desk and instituted a digital-first reporting mandate, which it underscored by assigning key print people to the Web. A digital editor can call on any reporter to file for the Web, while reporters have been trained to shoot their own videos and work with social media to amplify their stories.

Increase posting volume
With rare exception, all content is posted to the Web first, with as many as 300 posts going up a day (including story updates), up from 50. “We’re a 24-hour news business that just happens to produce a newspaper,” Myler said.

Staking out national coverage claims
In addition to splashing celebrity stories and oversized photos on the front page of the site, the Daily News took a strong stance on stories of national attention, from Sandy Hook to immigration to Ferguson. In covering the Sandy Hook shooting, the paper launched a pro-gun control petition, which received nearly 160,000 signatures. “Nearly 90,000 of them came from outside New York,” Myler said. “That was a pivotal moment where the Daily News became almost America’s Daily News.”

Mining the archives
It goes against the conventional wisdom for a news site, but the Daily News has discovered what viral publishers know: that older stories can perform just as well with readers if not better. Such was the case with Man dies from caffeine overdose, ingested ‘spoonfuls’ of powder equivalent to 70 cans of red bull and Topless paparazzo wins $40,000 settlement from city, older stories that got 165,000 and 150,000 views, respectively, after resurfacing on reddit earlier this year. So the Daily News is aggressively tagging stories from the archives, and when planning coverage for scheduled events like the Oscars and Emmys, it has begun to include related stories from the archives. “What social and the Internet has done is challenge the philosophy” that in-the-moment news is the most important, Myler said.

Training staff on social
The Daily News has a three-person social media team, up from one, to spread the social gospel. Ten percent of the site’s traffic now comes through social media. There’s been SEO and social media training for the 270-person edit staff. A daily briefing on the site’s social and Web stats goes out to top editors, though they’re encouraged to share it with the rest of the staff.

Now, visitors are averaging 11 minutes on the site, per the publisher, citing Adobe Analytics. Looking ahead, the Daily News plans to roll out new article pages designed to keep people on the site longer by tailoring content to them based on the page they initially visited; new niche ad products like an automotive vertical; and audience targeting capabilities. Breaking down that audience will be important, said Dorian Benkoil, svp of digital media consulting firm Teeming Media. “The key for the Daily News will be to segment and best leverage whatever parts of that 80 percent are most valuable, most loyal, and lead to higher retention and engagement,” he said.