One man’s crusade against the tech press echo chamber 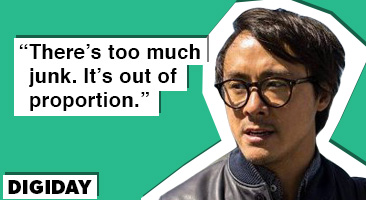 One day several years ago, Brian Lam, then the editorial director of Gawker-owned gadget blog Gizmodo, had a revelation: The average person didn’t care about what his site was writing about.

His epiphany was the result of being asked a simple questions like “What kind of TV should I buy?” by “normal” people, his term for those outside the tech press echo chamber.

“I thought it was ridiculous that I wrote about these mainstream gadgets and wasn’t able to answer those questions,” he told Digiday. Lam — who had previously worked at tech news stalwart Wired — concluded that it wasn’t a singular problem; rather than cover stories with readers in mind, the tech press was churning out a high volume of low-quality stories about topics “normal” people didn’t care about.

It’s difficult to argue with Lam given the proliferation of tech coverage and standalone tech publications in recent years, many of which cover the same companies, people and trends.

Lam left Gizmodo in the summer of 2011, and The Verge launched just months later. Many of the inaugural Verge writers and editors had come from AOL-owned tech site Engadget, which still publishes today. Journalist Sarah Lacy announced in January 2012 she was launching her own tech site, PandoDaily. That spring BuzzFeed launched FWD, its tech vertical. Former Wall Street Journal reporter Jessica Lessin debuted her own tech news site The Information on December 2013.

Valleywag — the tech gossip site Gawker resurrected in April 2013 — covered Lessin’s announcement about The Information in meta fashion, asking “Would You Pay For Another Tech News Website?”

“Then you have to ask yourself ‘Why is it being written about in such great quantity?’” Lam said. The answer, according to Lam, is advertising. Tech companies themselves are among the nation’s largest ad spenders, so churning out tech stories is a means to bilk them for ad dollars.

Lam’s disenchantment with the quantity or quality approach to tech publishing has informed his philosophy as CEO of The Wirecutter, a publication whose goal is to help electronics consumers make informed purchase decisions as quickly as possible. It also publishes infrequently. “The world needs fewer think pieces and more actionable advice,” Wirecutter’s welcome page states.

Lam, of course, has his detractors in the tech press. Tom Krazit, executive editor at GigaOm, defended covering the kind of news items Lam thinks are superfluous.

“I think you’d be surprised by how many people simply just want product news,” Krazit said. He likened it to sports reporting — some readers want to read Grantland, others just want box scores.

To his credit, Lam holds out hope that as more mainstream, less specialist publications cover tech more routinely the coverage will become less obsessed with the funding rounds and app launches — and, as a result, more reader-friendly.

“They’re totally justified getting into those spaces,” he said, pointing to recent efforts by the Atlantic and New Yorker. Even Vanity Fair is with its own event, the New Establishment Summit, this October with tech luminaries like Apple’s SVP of design Jonathan Ive, Tesla CEO Elon Musk and Snapchat CEO Evan Spiegel.

But PandoDaily’s Lacy agreed with Lam that the tech press could afford to, and should, move to a better model. Many tech blogs just rewrite press releases, she said, leaving little time for in-depth, boots-on-the-ground reporting for the industry.

“If you are a volume play — which most of these are– and trying to be cost effective rewriting press releases is the easiest way to do it,” she said.