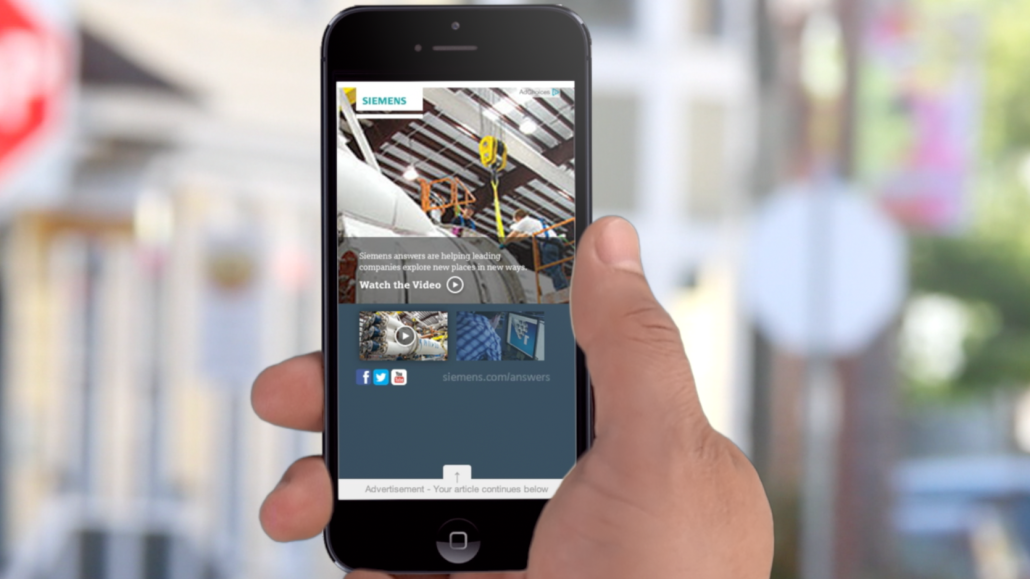 Publishers are desperately trying to figure out mobile. Say Media is hoping that selling responsive ad formats instead of device-specific ones will help it do just that.

The company launched new responsive ad units on its readwrite.com property this week to coincide with the site’s redesign, but it will eventually roll them out across its entire portfolio, which includes brands such as xoJane, Remodelista and Gear Patrol. The hope is that the large, visual units will attract dollars from big brands. Siemens is the first to buy them.

Like a responsively designed Web site, the “adaptive” ads automatically rearrange their content based on the size of the screen they’re being viewed on. The same ad that stretches the width of a 27-inch desktop monitor will contract and adapt to be viewed on an iPhone screen, for example. The idea is that one piece of creative can deliver the same ad experience on mobile and tablet devices as it does on desktop ones. Further, Say can charge the same amount for them as a result.

“The challenge with mobile is that it currently generates around 20 percent as much revenue as the desktop,” Say Media CEO Matt Sanchez said. “This is about how we can make a publishing business work as users move away from the desktop.”

According to Sanchez, the company is focused on how it can prepare for a world that’s 50 percent mobile. Currently, 35 percent of its traffic comes from non-desktop devices, but that portion is growing at a rate of 5 percent every three months. A big part of that preparation is figuring out how to make more money from smartphones and tablets.

As a result, the company plans to charge for its new ads based on a share-of-voice or a cost-per-exposure basis, regardless of the device they’re served to. Mobile banner ads are cheap to procure from networks and exchanges, so Say opted instead for a non-standard format. It wanted to create a mobile ad environment advertisers can’t get elsewhere and one that fits more seamlessly with the content on its sites.

“When you’re scrolling through content we think this type of in-line experience makes more sense for the user, but it also gives an advertiser more real-estate. We think this’ll allow us to command a premium versus just a mobile banner,” Sanchez added.

Other publishers including the Boston Globe, the Washington Times and Mashable have also experimented with responsive ads. Google, meanwhile, is working on solutions of its own.

As publishers across the board see more of their traffic coming from mobile devices, it’s now crucially important they find ways to better generate more revenue from those audiences. Whether that’s achieved through responsive ad units or things like sponsored content remains to be seen, but it appears that publishers relying on IAB standard banner ads are unlikely to ever see the influx of brand dollars many have predicted over the years.