Michael Wolff on digital media in 2015: ‘A deluge of crap’

Talking with Michael Wolff is not for the faint of heart.

An outspoken observer in an industry not lacking for observers, Wolff stands out for his atonal proclamations and ability to make enemies. In an interview with Digiday last year, the award-winning USA Today and Hollywood Reporter columnist said the state of digital media was “pretty damn bleak” and correctly predicted a ramping up in competition for reaching brands.

In what we hope will become a Digiday holiday tradition, Wolff revisited his predictions, weighed in on some of the bigger media stories of the year (including one he himself played a role in) and sounded off on what to expect in 2015. Don’t touch that dial:

A year ago you said the state of digital media was “pretty damn bleak.” What’s your assessment at the end of 2014?
It still looks bleak. The interesting thing is there is a sort of coming-to-terms with it. Many people are starting to say, “What actually does this add up to?” The New Republic thing was an interesting tipping point of suddenly people saying, “This is not necessarily logical or necessarily the future.”

The hand-wringing over the New Republic seemed completely out of proportion with the event itself.
I was surprised, but that’s an indication that suddenly this is a big question. This seemed existential. What actually are we talking about here? The underlying implication is that these digital people are kind of fools. This digital ambition is wackadoo. The conclusion we’re coming to is that digital media is entirely, only, solely, completely a traffic game. There is no other model. If that’s true, there is a whole set of other implications, essentially lowest-common-denominator implications.

Who’s doing it right? Who is not a lowest-common denominator?
Probably Netflix. Yeah, “It’s disruptive; it’s this; it’s that.” But the curious thing about Netflix, if you look at it, you think, “Wait, that’s television.” The only thing that’s different from television is the means of distribution. Netflix really doesn’t have anything to do with digital media — there’s no social, no community, no commenting, none of the digital media conventions or forms.

But TV is historically a lowest-common-denominator medium.
TV was the wasteland. Now digital media is the wasteland. There’s nothing there. A deluge of crap. TV has gone in the other direction and produced these things everybody watches and talks about and become important signposts of the culture. So TV is upscale, and digital is downscale media.

Netflix isn’t a news or information outlet, though. It’s strictly entertainment.
That’s an odd thing about digital media. Essentially it gets invented on the basis of news and information. In truth, media itself is always about entertainment. At the least, news and information are the tail. The creators of digital media are not news people. It ultimately is going to handicap you when you’re building a media business.

One thing we saw a lot of was traditional media companies trying to recast themselves as technology companies.
There’s this conceit that technology is the future. Tech companies are valued at a higher rate, and all the other shibboleths we could go through as to why you’d want to describe yourself like that. But technology doesn’t do anything other than make processes more efficient. Which can be transformative. But it can’t create media. People don’t ultimately develop a passionate relationship with efficiency. The media business is necessarily a non-digital experience. Digital is about reproducing something so it’s exact. Media is about making something original. 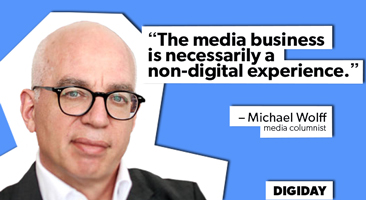 So what happens in 2015?
There’s going to be a dawning understanding that that’s what digital media is: You’re in the direct-response business. The native content business is basically responding to that. How do we get out of this? There’s only one media model that works, and that’s television. Digital media has managed to kill music, kill newspapers. It’s only television that exists now.

Television?
Everybody in digital media will be trying to get into the television business. The only word you hear now is “video.” There are actually two words you hear: “premium video.” It seems to me a very clear step back to television. I also hear about licensing video. You’re going to start to see re-reruns. Netflix, Amazon and Yahoo have already gotten to the point of original video.

We’ve been seeing a lot of journalists become entrepreneurs and launch their own outlets. What do you make of that trend?
Who wouldn’t do it if someone was offering you the opportunity to do it? But there are no success models here. What could the success be? There is no other model but traffic. All of these somewhat-focused vertical high-end journalists going into a business where they have to produce a mass-market product? I’m a little befuddled by that. I suppose it’s because BuzzFeed does it, and they have some actual journalists. But BuzzFeed is a tech company. One which is wholly focused on aggregrating a mass audience. It has no other value beyond that.

BuzzFeed claims to aspire to real journalism.
BuzzFeed is not about journalism. It’s about 150 million uniques. These other guys are going into a business in which you have to compete with BuzzFeed.

That’s what Nick Denton seemed to be getting at in his recent memo to Gawker staff. He essentially copped to trying to out-BuzzFeed BuzzFeed.
Exactly. There’s only one pole there. Whoever is rushing to the bottom is where everybody has to go.

So journalism suffers here.
The best journalism functions with discrete audiences. There’s no such thing as a discrete audience anymore. If you are fundamentally a tech company à la BuzzFeed, journalism is going to suffer. I think journalism has always had to carve a difficult path. But the idea that journalism somehow has a right to exist just because of its virtue is a Guardian point of view that I don’t subscribe to.

What about Vice? In the past, you’ve held them up as a media company that’s getting it right.
Their entire effort is to literally get themselves a cable channel. They’ve played an interesting game: They created a brand. They’re not a tech company. They’re a real, traditional media company. What they’ve artfully gotten around is that they don’t really have an audience. In conventional terms, it’s a brand and if they do that well enough, somebody will give them a cable channel. And it seems to be happening.

Were you surprised to find yourself at the center of the Uber-BuzzFeed flap last month?
Of course I was surprised. [BuzzFeed editor-in-chief] Ben Smith has one speed: find a quote that’s going to gain traction and that becomes a highly trafficked story. It is fundamentally the blogger’s game. In a way I shouldn’t be surprised he got that quote and he ran with it. I like and respect Ben, so it was a little surprising that he essentially misrepresented entirely what happened.

Have you guys spoken since?
No. Would I? Of course.

You recently quoted him saying BuzzFeed won’t be around in three years. Was that a little retribution?
What the hell, that’s karma.