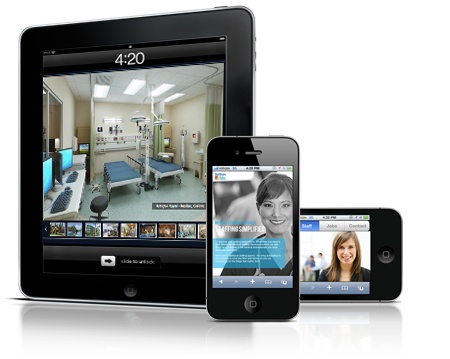 File this one under the “cobbler’s son has no shoes” category. Many of the industry’s top advertising agencies, which presumably are helping usher their clients into the mobile era, neglect to put the same care into their own digital presences.

Digiday examined the websites of 50 significant agencies from an iPhone, and found 27 of them (54 percent) simply served up the desktop versions of their sites, even though many have mobile services or have in-house mobile practices. Examples include 360i, AKQA, Huge, TBWA, Rosetta, KBS+P, and Tribal DDB. AKQA’s site, for example, is virtually impossible to navigate from a mobile device owing to the size of the text and navigation buttons. Saatchi & Saatchi’s site is built only in Flash and doesn’t even load. Among the sites that did have mobile-specific content, some were extremely basic, while others provided only contact information.

This is a continuation of an earlier trend of agencies having horrible Web experiences of their own, even as they sold Web design and development services to clients. Over the last few years, agencies have improved their desktop sites, which were often nearly unusable case studies in “flashturbation.”

The good news is agencies aren’t behind their clients. Last week, Digiday found that many major brands don’t provide mobile-specific sites either. And not all agencies had sub-par offerings. Razorfish’s mobile site, for example, is simple yet thorough, featuring examples of its work alongside its social activity and contact details.

It’s important to note, though, that the vast majority of desktop Websites do now render well on smartphones, even if they’re not tailored for those devices. That said, they’re often difficult to navigate and to read because of the smaller screens found on iPhones and the like.