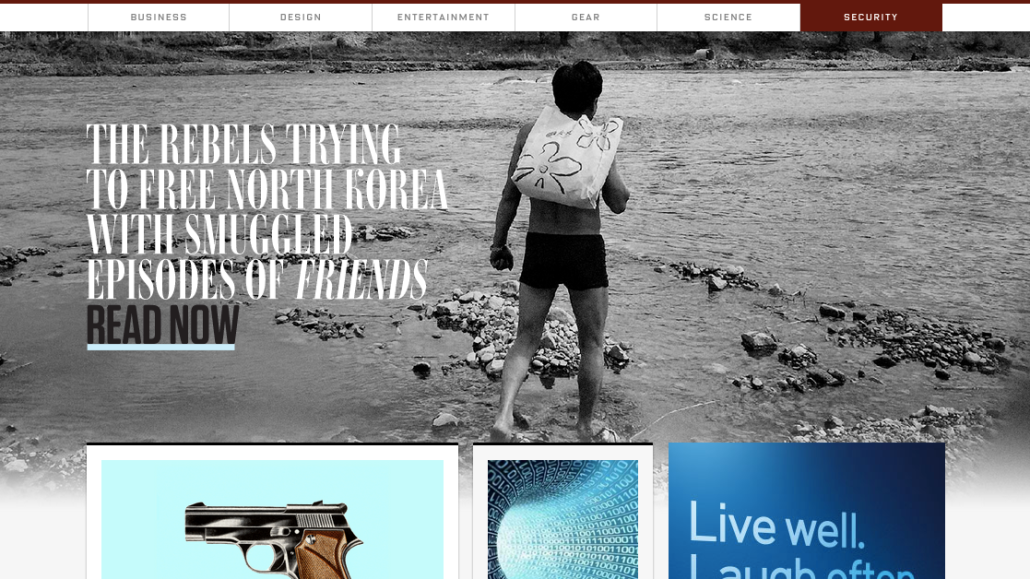 Wired on the Web suddenly looks a more lot more like Wired in print.

The site’s redesign, launched earlier this week, takes many of the design cues introduced with Wired magazine’s redesign in 2013, with a shared typeface, full-page section images, and an editorial orientation around business, design, entertainment, gear, science and security. Wired.com is also built with a flexible card-based homepage, which lets editors feature stories based on how important they are.

The move is as much strategic as it is cosmetic. Since stepping up as editor-in-chief in 2012,  has attempted to bring a single design sensibility to Wired both online and off.

“It’s now possible to have a Wired experience in so many different ways on so many different platforms — from experiential to digital to social,” said Wired editor-in-chief Scott Dadich. “That’s tough to manage. The magazine and website, and even our offices, were designed concurrently and with each other in mind — from look and feel to how our tools enable that work. It’s about making sure Wired is Wired, no matter the venue.”

With the prints-meets-design push, Wired strategy mirrors that of Bloomberg, which has also tried to infuse its digital operations with print-design sensibilities. Both its October launch of Bloomberg Politics and, more recently, its January launch of BloombergBusiness.com were attempts at adopting the elements of print-news design for the digital context

“Whether Businessweek is on the Web or in print, there should be a blurred line either way,” said Bloomberg digital editor Joshua Topolsky. “We know there are more readers coming in online than through print these days, so it makes sense to have that unified brand across both.”

Topolsky said that publishers have long been hamstrung by the technical limitations of Web design. While a print layout lets designers give a big story penalty of real estate, that sort of editorial control has been slow to come to most publisher homepages, which tend give lengthy features the same treatment as 200-word blog posts. New tools are finally letting publishers turn that around.

“When you fuse print and digital designs, the palette for what you can do becomes much larger,” he said.

It’s a bit of a back-to-the-future moment for publications. Their early forays into the Web have been more informed by native to the Web-design choices. Now, with sites looking pretty much the same with grid designs, the pendulum has swung back to the ethos of print, at least for some.

Still, print and digital often form an uneasy marriage. While bold and unique, both Bloomberg designs were criticized for being too bold on design at the expense of familiarity and information. “I fondly remember the good old days when the Bloomberg News home page above the fold used to have news on it,” winked venture capital investor Marc Andresseen on Twitter in January.

Despite the push-back, designers say that the combination of digital and print is a good thing, particularly for readers.

“For more than a decade, publishers were saddled with generic ‘system’ fonts for their websites. Now that Web type has caught on, there is a new sense of voice and personality on the screen,” said publication designer Roger Black. “I don’t think of this as making digital publications look like print. It’s more a case of making them look right — and readable.”