How the New York Times Live is adapting its events plans 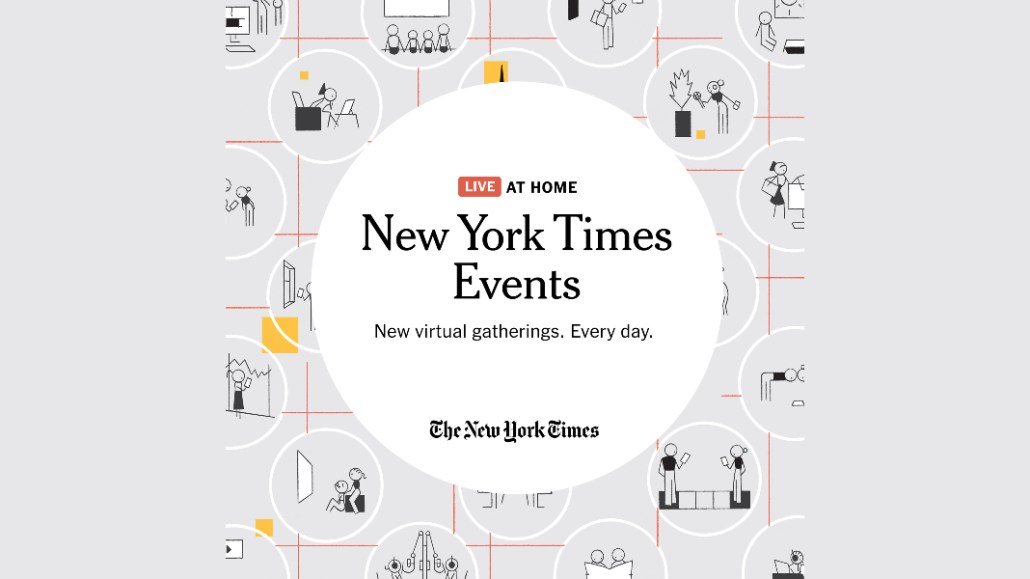 Going into 2020, Jessica Flood, managing director of The New York Times’ events division, NYT Live, and Elizabeth Weinstein, its senior director of programming, had created a calendar filled with 40 events aimed at building communities around franchises including Dealbook and NYT Cooking, according to Flood.

The week of March 9, they realized that those plans would have to be almost entirely scrapped, and the events team, consisting of 23 staffers, began figuring out what could be recast as a virtual event.

The team found some opportunities. Since March 9, the Times has produced more than 30 digital events that have attracted more than 100,000 attendees from over 90 countries, Flood said. Additionally, over 80% of attendees in April were new attendees to the publisher’s events. The company is also heading towards hosting one event per day, including the weekend.

The Times had to abandon some of its live events plans. For example, The New York Times Food Festival was postponed fully until next year because it was too tactile to take place in a virtual setting.

For now it’s also forgoing ticket revenue. In the latter half in the year, if the business-to-business space has a “significant moment” of drawing a lot of attendees, Flood said her team might consider charging for consumer revenue from that crowd.

The Times has been able to monetize some of the events through sponsorships, however. Accenture, previously a sponsor for the Times’ Dealbook Conference, is now sponsoring four virtual Dealbook events. Additionally, MassMutual was supposed to sponsor a three-part, in-person series called Unfinished Work this month, which has now been transitioned to a fully digital program that will still be presented by MassMutual.

The task force has learned a lot of techniques — from creating live virtual versions of top-performing articles to incorporating pre-recorded videos into events — that should serve the events business down the line. It has also restructured the Production team into three-person pods responsible for executing one event series or type of event in order to be more nimble.

Additionally, the group created a playbook that houses all best practices, sample workflows for each platform and a digital events checklist designed to create consistency across the pods.

A digital events task force was created in mid-March to help pinpoint the transferable elements of the other vertical’s event franchises. The team, made up of six staffers from various areas of the company, including research and development, marketing, brand, events and newsroom, has met once per week since forming, Flood said.

One model that the task force explored involved transforming top-performing Times content into virtual events, to bring more life to the stories as well as offer a chance for more interactivity on the topic, said Weinstein.

For example, one of its top performing digital events so far was a conversation led by NYT Well’s founding editor Tara Parker-Pope, who spoke about the anxiety that teens are experiencing during the pandemic, which had 7,000 total viewers. Comparatively, only 250 people were able to attend the Times’ last in-person live event, a discussion tied to The 1619 Project held on March 6.

A lot of the events that the publisher has put on so far have functioned like conference calls. The Times is looking to branch out beyond this with one of its bigger upcoming projects — a virtual recreation of Broadway shows’ opening nights. That program will incorporate pre-recorded videos that “feel live” in order to make sure the visuals and audio are of high enough quality, Flood said.

The big challenge for many publishers is dealing with falling sticker prices and being able to sell advertisers on the new ROIs that these digital events offer.

“Ultimately, I don’t see the actual sponsorship being a one to one swap,” Barron said, between live and virtual events. Virtual offers publishers the ability to capture data about attendees in a way that live events could not, however, especially with understanding attendees’ intentions.

In a physical environment, Barron said there is only one way to engage with people, which is trying to capture their attention from a booth. In a virtual environment, attendees are able to have someone the opportunity to choose and opt into different levels of engagement with the sponsors.