Is Airtime Ready For Prime Time? 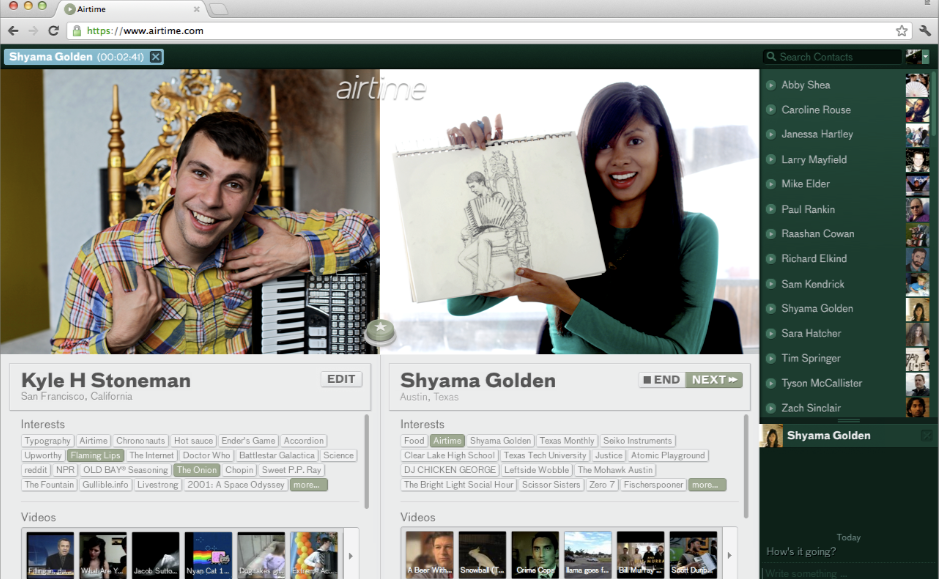 The whiz kids behind Napster are all grown up, and Sean Parker and Shawn Fanning officially launched their Web-based video chat service, Airtime. Essentially, it’s ChatRoulette without the nudity. At a celebrity-studded launch fraught with technical difficulties, the company, which has so far raised $35 million from investors including Michael Arrington, Ron Conway and Ashton Kutcher (as well as MTV founder Bob Pittman, who sits on its board), tried to pitch the service to reporters and bloggers as an alternative to social networks.

“Everything now is filtered through the social graph,” Parker said at the event. “We have the ability to share media faster than ever before. But the social network is somewhat constraining. It has become an increasingly public forum. You’re doing everything in front of your friends, and that’s limiting.”

The idea, according to Parker, is that social media has made our worlds smaller, and Airtime has the ability to enlarge it by letting people meet new people based on interests and location. It’s a standalone site, but also connects with Facebook — which makes sense, since Parker was the first president of the social behemoth. Users also have the ability to be anonymous.

Addressing concerns of the site’s potentially graphic nature — one of the pitfalls of ChatRoulette — Airtime has, according to the New York Times, built “in a number of systems, including facial-recognition software that sends up a flag if no faces are detected on camera.”

Adam Broitman, chief creative strategist at digital agency Something Massive, is big on any product aiming for real-time Web interactions and believes Airtime has a competitive advantage because it’s branded outside of Facebook or Google Plus. When it comes to encouraging new consumer behavior, he said, it is very difficult to encourage consumers to take action within environments they already associate with other types of behaviors (i.e., Facebook Places).

“I think people are creating more noise around this product given its founders, but I am not sure it is going to be the disruption that people are hoping for,” Broitman said. “I am not sure they are really picking up where ChatRoulette left off, and given the attention they are giving to security, it may lack the organic nature that ChatRoulette had. I put my money on the space, but would not put it on the product. Furthermore, while Sean Parker has figured out to disrupt, he has not figured out how to monetize his disruptions.”

At that’s a pretty big question: How will it make money? And just as important, will brands want to be in this environment?

“From the sounds of it, sounds like it will gain traction if it provides a clean user environment that allows people to create new connections,” said Justin Wroe, svp, client business partner at Universal McCann. “The trouble for brands then becomes how you add value to experience rather than distraction or clutter. From what we have seen with chat-based opportunities, adding value as a brand is very difficult to do in that environment. This could be interesting if it’s an aggregation of various content streams with a chat component, but if it is chat alone, it is going to be harder to work with.”

According Noah Mallin, group director for social media at Digitas, the only obvious place for brands to play in the short term for is one-to-one content or customer service — which could be awkward because it would have to be an individual and not a brand connecting with a consumer. Mallin also sees the ticker of trending interests as an interesting space for brands to play; it could conceivably have Twitter-like “Sponsored Trends.”

Airtime’s predicts the ability to chat with multiple people at once, which Mallin argues can give Facebook users a tool that matches Google+ Hangouts for ease of use and flexibility.

“I imagine they are also working on a brand-friendly tool that would allow for the ability to broadcast chats to fans of a brand page,” Mallin said. “As it stands, brands don’t have a clear and compelling opportunity yet, but Airtime has the right ingredients to be the next big hit in social, and once it has a user base, monetization through brands is sure to follow.”