‘Gaming is where culture is being set’: Bud Light gets serious about esports 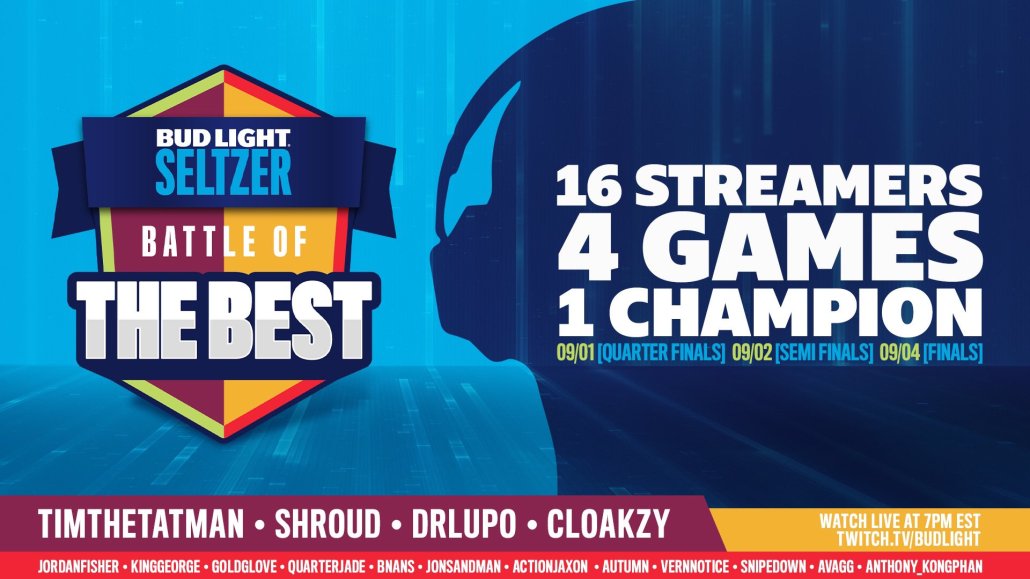 Sometimes it pays to be the biggest and the first. This is how Bud Light has established itself in one of the fastest-growing sectors in media — esports.

While the beer brand isn’t the only big advertisers in esports, it is one of the more pervasive. Over the last five years, Bud Light has sponsored some of the biggest properties in the category such as League of Legends and NBA 2K.

And now, doubling down on esports, it has created its own.

Earlier this week, the advertiser launched ‘Battle of the Best’ on its Twitch channel where some of the platform’s top streamers and personalities will compete against each other in a medley of games between Sept. 1 and Sept. 4.

“There are so many opportunities in this space when it comes to what you can own, whether its broadcasts or even a channel like the one we have on Twitch,” said Joe Barnes, director of sports marketing at Bud Light.

In doing so, Bud Light is trying to straddle the line between advertiser and content creator. On one side of the strategy, it is pushing into in-game advertising with a deal to have its brand appear in a game nearing completion. On the other side, it’s looking to pull more viewers into its Twitch channel and is looking to sign esports talent to help.

“Throughout the ‘Battle of the Best’ we had these big, albeit short-term, partnerships with a few popular streamers,” said Barnes. “In the coming weeks, we’ll be announcing a formal partnership with a big streamer.”

Whether its influencers or in-game advertising, opportunities around gaming for Bud Light are becoming clearer the further esports crosses over into mainstream culture. By 2025, the gaming market could become a $300 billion industry, per GlobalData. For Context, the global film industry made $100 billion last year.

Now, the gaming industry is more than just people buying video games. And when there are rappers like Post Malone who co-own esports teams and the son of NBA star LeBron is part of a professional esports organization, it makes it easier for gaming to reach a broader audience.

The latter point is where Barnes sees the sweet spot for where Bud Light’s esports marketing crosses over into what it does around live sports. Sooner likelier than later athletes on Bud Light’s sponsorship roster could appear on its Twitch channel, instead of a TV ad.

“We’re being approached by athletes all the time who want to be involved because they like to game,” said Barnes. “We’ll work on the partnerships we already have in place to bring them into our ecosystem on Twitch and the Bud Light channel there. Gaming is where culture is being set.”

“Our YouTube channel has traditionally been more music-focused, whereas Twitch has been more gaming but we’re starting to mix that,” said Barnes.

His point is backed by the fact that some of the most popular leagues in esports — including the Call of Duty and Overwatch leagues — exclusively stream on YouTube now. That wasn’t the case a year ago. Meanwhile, Facebook continues to chip away at the sector, having made its own gaming platform more accessible to fans in recent months.

For now, however, Barnes’ focus is on Twitch where the advertiser’s channel has nearly 35,000 followers.

In some ways, the coronavirus has been the ultimate stress test for whether or not Bud Light’s investments in gaming over the last five years have been worth it.

While cheaper to activate compared to other areas like live sports sponsorships, it’s not cheap to do. For example, BMW is paying around $500,000 to sponsor five of the most popular gaming organizations around the world, according to estimates from an exec who brokers commercial esports deals but wished to remain anonymous.

Those costs are exacerbated on two fronts: shallow measurement and an ad-resistant audience. Overcoming those issues is hard at the best of times, not least during a downturn and the financial stresses that come with it. But for Barnes and his team, those challenges were softened by the experience it has built up over the last five years, particularly when it comes to measurement. For example, it now works with Nielsen’s esports team on brand lift studies and does brand equity studies in partnership with Twitch.

“We were already well entrenched in esports prior to 2020 and we had the experience that’s meant what we’ve done in recent months has connected with streamers who know we’re a brand that cares about them and tries to offer them something new,” said Barnes.

That one of the biggest advertisers in Anheuser-Busch InBev is taking a keen interest in gaming is reflective of a broader view. Some advertisers like Adidas are going so far as to look at how they can hard code their brands into games.

“Esports is a trigger for a much bigger media play around the metaverse concept,” said Itamar Benedy CEO at ad tech vendor for in-game inventory Anzu. “You’re seeing developers build these virtual worlds where people visit for various reasons, from gaming to watching a music concert as seen in Fortnite.”

“Gaming should be an advertising category just in the same way you look at search, social and outdoor media,” Benedy added.