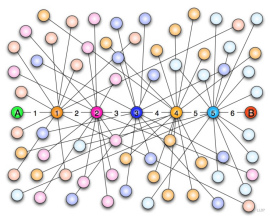 Four Degrees of Facebook Separation: According to two recent studies conducted by Facebook in collaboration with researchers at the Università degli Studi di Milano, any two Facebook users are separated by roughly four degrees and not the commonly cited six degrees. The degrees of separation have been decreasing over the past three years as Facebook has grown. The studies, which examined all 721 million active Facebook users and their friendships, also found that a Facebook user’s friends are most likely to be from the same country and similar age group. Another interesting finding is that the average number of friends a Facebook user has is 190. According to data from the studies, only 10 percent of people have fewer 10 friends, 20 percent have fewer than 25 friends, while 50 percent (the median) have over 100 friends. All in all, it looks like we are closer to others than we thought. Facebook Data Team

Checking in to the Revolution: Foursquare is hot in Egypt, especially for checking in to Tahrir Square, the site of past and continued protests against the Egyptian government. Tahrir Square has been checked into 1,821 times so far, and its “mayor” as of now is a man named Khaled Ali. Ali is also Mayor of a figurative place called “Revolution,” which is apparently located near Tahrir Square. RCR Wireless

App of the Day: Every woman has been in this situation: A creep keeps on hitting on you and won’t take a hint and leave you alone. How do you make the relentless creeper go away without giving him your digits? Well, now there’s an app to get you out of this bind: LoCreep. It’s a free, web-based service that gives you an anonymous number that you can give to the persistent creep to get him off of your back, and the app (here’s the kicker) lets you share (and shame) the guy’s advances via a social network. How? Once the unknowing creep dials the number, he will get an anonymous voicemail message. If he leaves a voicemail, his message is transcribed, and then you, the LoCreep user, can sign in and read the voicemail he left, see any texts he sent you, and you can respond. If you really want to go the extra mile, you can “post the chat to tumblr for a laugh,” as the app’s website suggests. This could get ugly. Refinery29

Tumblr of the Day: “Wish You Were Here” from the USSR. Soviet Postcards

Cartoon of the Day: Occupy Pokemon!