Facebook likes to talk about how it’s now a mobile company. It clearly wants to move that way with its ads.

Earlier this week, Inside Facebook reported that Facebook is experimenting with larger ads in the right-hand column on the desktop version of Facebook. The size of the image in an ad and the amount of room for text will be larger. According to Facebook, the ads are wider and taller, with the image being more prominent across the top of the ad.

In a statement, Facebook said, “We are running a small test in the U.S. where some people might see ads in the right-hand column that feature larger images. We have seen that people respond favorably to larger images — both from people and Pages — in news feed, and so we are testing this out on the right–hand side.” The number of people subject to this test is 1 percent of U.S users.

What makes this interesting is that it now lines up with its mobile ad format. The days of agencies and brands creating different versions of campaigns to fit across Facebook’s different formats — mobile, tablet, desktop — seem to be coming to an end.

The only way mobile ads will live up to their promise is if they cease to be a distinct category. This move should be seen in this light. It’s akin to Google’s recent roll out of Enhanced Campaigns, which tries to make AdWords a consistent environment for advertisers across multiple devices.

“My assumption is it’s making versioning easier in a world where versioning is getting more complicated,” said  Andrea Wolinetz, managing director of connected platforms at PHD. “If I’m buying in mobile and tablet and desktop, each ad has different sizes and copy. But if I have a product I’m trying to push out to contextually be the same, how great to have one ad with one size as opposed to multiple ads with multiple sizes because each ad has a different version. That to me seems to make sense here.” 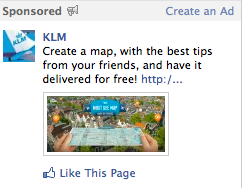 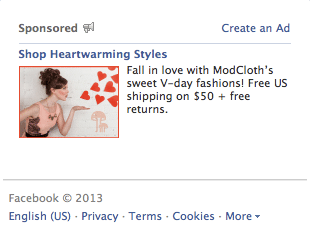 A November 2012 HubSpot study found that images on brands’ Facebook pages receive 53 percent more likes than the average post and that posts that use photos receive 104 percent more comments than the average post. By increasing the dimensions of an ad, allowing brands to place larger images in it, Facebook is signalling to brands that what works well on your brand page can also work well in our ad ecosystem.

Deep Focus CEO Ian Schafer believes the more Facebook clutters the desktop, the more likely people will shift to mobile. And the problem here is that Facebook — like every other publisher — hasn’t quite figured out how to make money off of mobile.

“As the Web goes mobile, Facebook needs to find more ways to squeeze more blood from the desktop stone,” Schafer said. “No one realizes as more eyeballs move to mobile, there’s still no real advertising model that works there.”

Vik Kathuria, managing partner of corporate strategy and digital investment at MediaCom said, “though the fact that Facebook is becoming a mobile company with a majority of its users accessing via mobile, it remains to be seen if they can monetize efficiently with display on mobile.”

For years, Facebook has essentially preached that brands and agencies need to reorient their thinking around what makes a great brand experience. It doesn’t have to be a large creative canvas; it should be social. And yet, like other new platforms before it, many brands have said, “Thanks, but no thanks.”

Now it appears Facebook is giving ground by giving brands a bigger ad unit. To be sure, this is a tiny step. The ad sizes aren’t exactly big takeovers. And they’re still not standard IAB sizes that would bring Facebook ads into the mainstream of online advertising — and cut down on added production costs. But because of the larger size, the ads are an indication that Facebook wants to be as consistent between desktop and mobile. According to Facebook, it’s using this test to gather user and advertiser feedback.

This move is part — and a very small one at that — of Facebook’s maturation to what advertisers really want. It’s part of a process where engineers who have always led the charge in product development are now working closer with a sales team for a company now beholden to stockholders. In other words, revenue has to create a bigger part in how they create products.

“There’s a sense of Facebook recognizing images work well, and we need reasons to give people to buy,” Wolinetz said. “It just makes it easier. It looks like the dimensions of this would be similar to what we’re seeing in the mobile ad formats.”