Everyone to Airbnb: What the heck is up with your new ad?

What “Is Mankind?” It is a question that has bedeviled philosophers since the dawn of civilization — from Aristotle to Francis Bacon to Thomas Hobbes. Now add to that list Airbnb, which hopes to answer that lofty question in a new television advertisement released today — and it’s making a lot of people feel uncomfortable.

In the one-minute spot, a toddler is shown stumbling toward a door while narrator Angela Bassett asks just “how kind the he’s and she’s of this mankind are.”

Anyway, the script actually makes sense once it’s spoken together — and Bassett’s soothing tone doesn’t hurt, either — but when it’s taken apart, it sounds downright weird. Just look at its Twitter account, which posted lines from the ad before it was released: 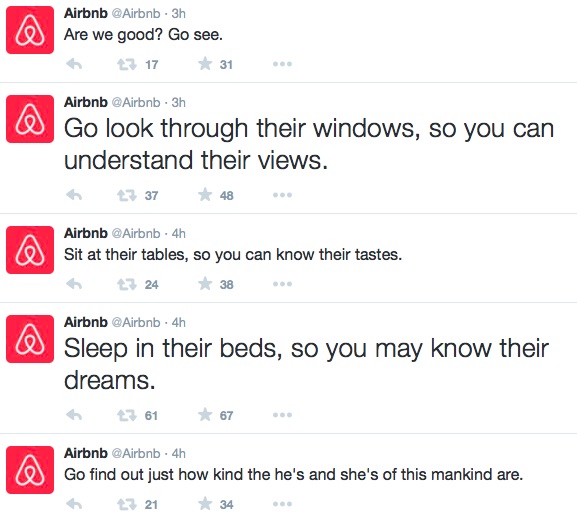 .@Airbnb Sniff their pillows. Get in real deep. Smell their fears and nightmares.

@Airbnb who else read this in a Freddy Krueger voice?

@Airbnb that is fucked

In the end, it was this tweet that perfectly summed it up:

If your business model depends on strangers not doing creepy shit in your home, maybe don’t tweet like a fucking psycho