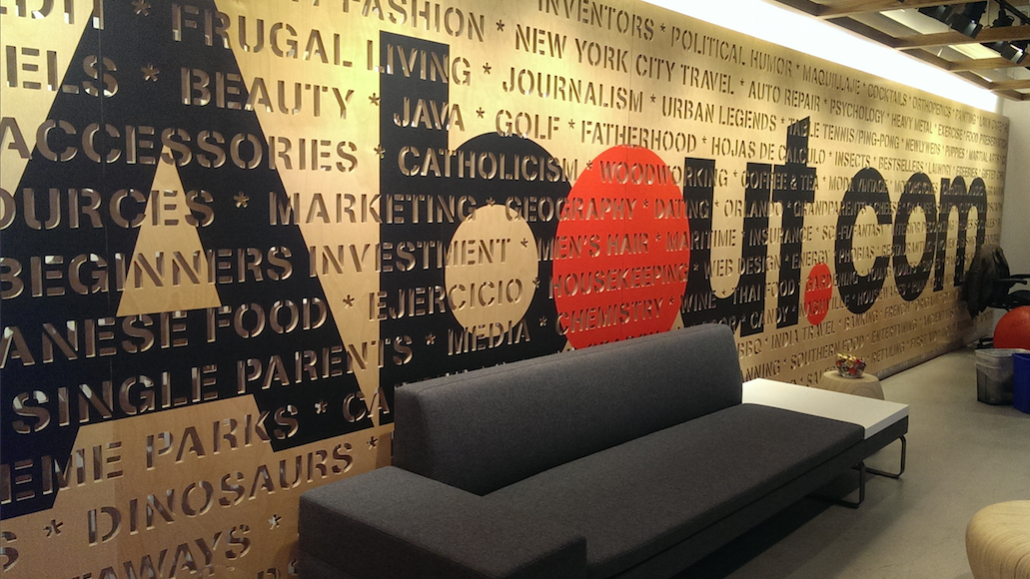 About.com is plowing deeper into native ads with the proposition it can marry its hallmark explainer-style articles with search-like intent data.

The company, known for search-friendly fare such as “10 Ways to Sleep Better” and “Top 10 Reasons Why You Didn’t Get the Job,” this week launched Idea Studios, an eight person content studio that will create how-to and explainer articles and videos for brands. Those brand partners already include the likes of security company Symantec, Walgreens and Disney, which sponsored a Disney-themed vacation planner on the site. In addition to its content studio writers, journalists formerly of SheKnows, Men’s Health and elsewhere, About.com also taps its network of experts to chip in.

“We don’t need to come up with a message and figure out how to get it to people. We’re creating the stuff people are already interested in and coming to us for,” said About.com CEO Neil Vogel.

Core to About.com’s sponsored-content pitch is that it has no shortage of insight into what kinds of articles its readers are looking for. The site has published over 3.5 million articles since 1997, giving it a decade’s worth of data about not only search interest but the seasonality of searches as well, according to data science vp John Roberts, who is trained as an astrophysicist.

People looking for information about the flu in September, for example, want to know more about side effects of flu shots, while December flu searches are dominated by queries like “how long is flu contagious” and “this year’s flu symptoms.” That’s valuable data for a brand such as Flonase, which can plan a campaign with greater insight into what’s important for readers at any given time.

About.com, which turned 19 this week, optimized itself for an era where search was publishers’ primary referral source. That focus is still reflected in About.com’s traffic sources: Around 80 percent of its traffic comes from search, most of which is through Google. Contrast that with today’s social-optimized sites, which get upwards of 70 percent of their traffic from Facebook, the source of most of publishers’ growth today.

That search focus, in the end, might be better for brands, which About.com argues are better served by being next to articles on topics that readers search for. “The type of traffic we have is powerful because it’s people who are actively trying to do something,” Vogel said. When readers searching for flu symptoms land on About.com, for example, they’ll see not only regular editorial content but related sponsored content as well.

While an increasing number of news publishers are pushing into more newsy native ads — advertisers are expected to spend $4.3 billion on this this year, according to eMarketer —  Sam Slaughter, vp of content at Contently, said that opting for more evergreen, intent-based content might be the better route for most brands.

“If you’re a brand, you want to be on people’s minds when they are making purchase decisions,” he said. “Being able to make content that helps people make those decisions is a big draw.”