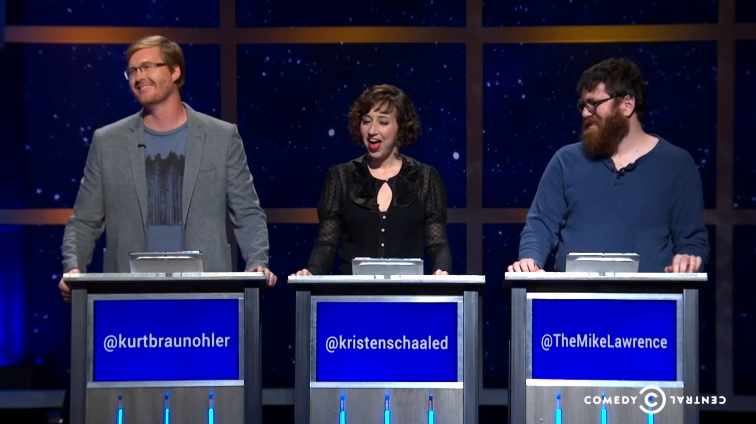 Comedy Central’s late-night gameshow “@midnight” is social TV’s perfect storm, a “Whose Line Is It Anyway” for the millennial set.

The two-month-old show consists of comedians competing for the best one-liners about different social media topics — whether it’s a weird Instagram picture or a trending hashtag. A large part of the show involves viewer participation, too. For example, “@midnight” has a regular interactive segment called #HashtagWars where the comedians come up with their best one-liner for made-up hashtag topics like #LesserAwardShows or #CheesyMovies. Viewers are also invited to come up with their own responses to the hashtags on Twitter, and the best audience responses get announced on the show the following week.

So it’s not just that the show’s actual content is about social media; the show’s producers are themselves very good at social media — even between episodes. As a result, @midnight has built up a strong viewership and an impressively engaged social media following.

Steve Grimes, svp of multiplatform programming and strategy, and Gary Mann, svp of original programming and development at Comedy Central, recently discussed “@Midnight” with Digiday, how they write in real time to keep up with what’s happening on social and whether brands can really be funny on social. Some excerpts:

Was Comedy Central skeptical about a whole show based around social media?
Gary: It was very easy for us to pursue. These are three of today’s top comedians battling it out to see who has the funniest take on today’s social media. That’s what comedians do every single day anyway. So this is basically a platform for these great acts to get that out there. Steve: Comedians participate a lot on social media; they are often the first and most prolific on all of these platforms, so this really lets us harness what they are doing in their natural habitat and bring it to TV — it’s a great combination.

Would a show like this have gotten onto the air a year or two ago?
Steve: No. It would have had to have been a very different show a couple of years ago. Just the mainstream acceptance, not just of Twitter and Facebook, but things like reddit and etsy and other things that even six months ago may have not been enough in the zeitgeist. [The show’s host] Chris Hardwick does a great job of pseudo-explaining some of these platforms when he introduces a new one. He will  describe etsy in a sort of humorous fashion. In an episode last week, he was describing books, so he said something like a book is a “printed version of a Kindle.”

What does the writing process look like?
Gary: It’s the writers sifting through social media. There are seven writers and two researchers, and they are constantly online and presenting things to Chris and the producers. They cull down a mountain of material right up until two hours before the show tapes. They leave a hole: Act one is open until the last minute to make sure they are as topical as they can be.
Steve: A great example of that was last Mondays’ show when the maelstrom around Madonna’s Instagram picture showing her 14-year-old son holding a bottle of vodka really was gathering steam right as the show was about to tape. The first segment was rewritten to include that minute before filming.

Does the future of television involve more of this seamlessness between TV and social media?
Steve: It’s already having a huge an impact across TV, but is it the future of TV — I wouldn’t go that far. In one way or another, social is an integral part of everything we do now. If anything, I would say social is the future of looking at how a franchise can live while it’s not on air. Between when the show ended in November and just came back in January, we had a whole schedule of games through social; we really tried to replicate the tenor of the show online. It was very interesting and very successful — we added more than 20 percent of our Twitter followers when the show wasn’t on air.

What do you make of the brands jumping in on some of the hashtags from the show? 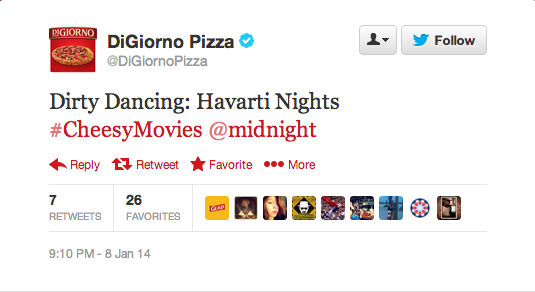 Steve: For us, that whole thing has been fantastic. We are always looking to bring the fan back into the show. The brand participation is an extension of that. Seeing Arby’s and DiGiorno getting involved in this is tremendous, and all credit to them for having people on their social media feeds quick-witted enough to join in the game.

Can brands actually be funny on social?
Steve: Absolutely some can be funny, and some definitely miss the mark, too, just like any comedy. We’ve certainly seen some good ones. The more brands that participate, the more good stuff we’ll see. Especially brands that you wouldn’t associate with being funny. Comedy and Clorox don’t always go together, but seeing them jump in was great.