Facing email’s limitations, Clover Letter branches out with an app

Clover Letter, an email news service aimed at teenage females, has expanded into the world of mobile apps.

Five months into founding Clover Letter, longtime pals Liza Darwin and Casey Lewis, both 29, soon discovered the format’s limitations. There was no way to archive the original stories they were sending out daily or for readers to get the content outside of email or share it on social platforms. Long email newsletters can get clipped, which hurts their open rate, as they discussed in this Medium post.

“We believe the future of email is massive  –  and we know better than anyone that teens do in fact read email,” they wrote. “But a huge part of its appeal is also its shortcoming: it’s practically vintage.”

So they created a free mobile app. It resembles a teenage girl’s scrapbook, with pastel and bright colors, doodle art, and a playful font. The front page is divided into seven sections, including news, wellness and career. 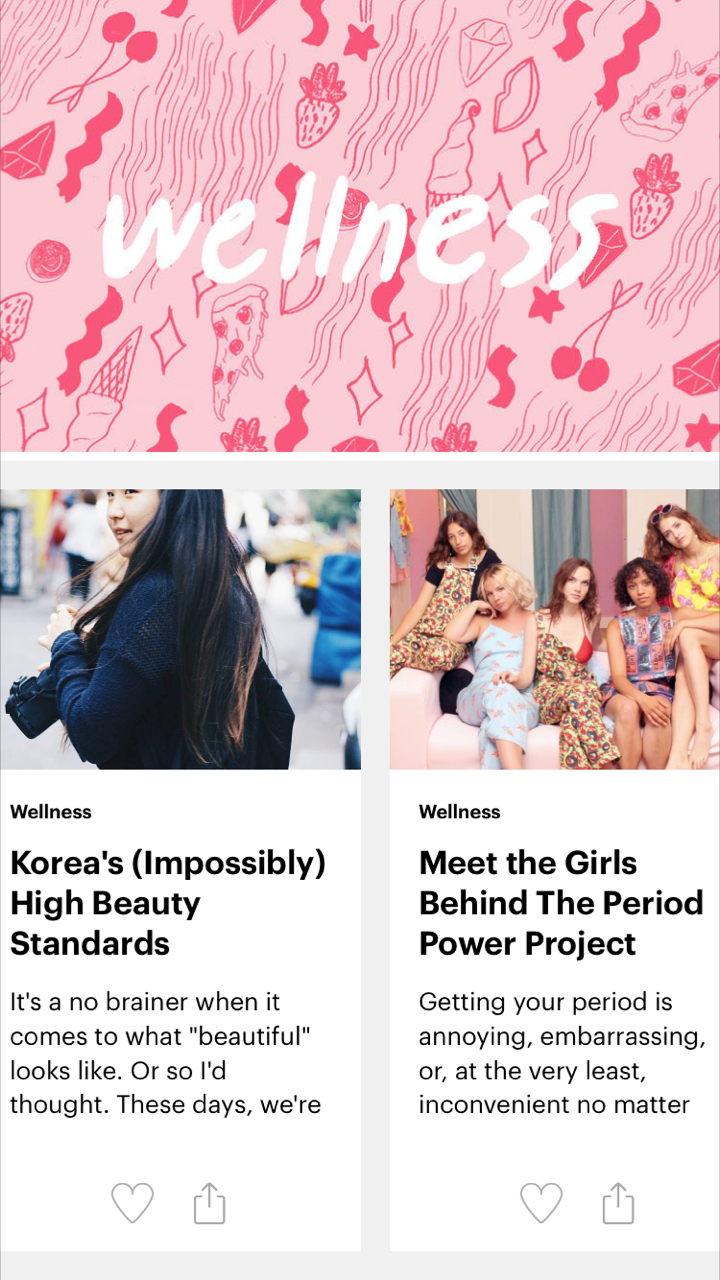 “Liza and I grew up reading all the teen magazines,” said Lewis. “You could keep them, revisit them; they had life advice, essays from real girls, and that was our inspiration. They were a little more thoughtful and not focused on traffic.”

Lewis and Darwin are used to speaking the language of teenage girls. Darwin was a digital editor at Nylon and MTV, while Lewis used to be a senior digital editor at Teen Vogue. Both quit their jobs to produce thoughtful content for teen girls. They used their own savings to launch Clover Letter, choosing the email format because it was cheap and didn’t rely on maximizing clicks. The evergreen content, including health stories like “How to deal with social anxiety” and “How to escape every kind of bad date” also has a long shelf life.

Clover Letter is among a number of startup publishers that are using email as a main way to distribute content. The founders wouldn’t provide email subscriber numbers, except to say it reaches “tens of thousands” of people, or share its unique open rate, but they said it has a gross open rate of 60 percent (which is usually higher than the gross open rate because it counts duplicate opens). That figure compares to another female-focused newsletter, Lenny Letter, which has half a million subscribers and a 69.5 percent gross open rate.

As for the rest of the business, as a bootstrapped operation, Clover Letter runs lean. The articles are written by Lewis and Darwin, with the help of two interns. Apart from one piece of branded content for Dove that they ran ahead of spring break, they’ve mainly focused on growing their reach. A book club they do with Penguin generates some money, but they wouldn’t say how much. The pair live off savings and freelance writing.

So with little to no marketing budget, Clover Letter relies on its readers to grow its reach, through the Clover Collective — 200 handpicked “brand ambassadors,” readers ranging from teens to older millennials, who share content, recruit subscribers and offer story ideas. The move mirrors what the Hustle does, a business and tech email newsletter that also uses ambassadors to help market its newsletter and conferences.

It’s hard for any publisher targeting millennials to stand out in a crowded market, which makes it wise for Clover Letter to go beyond the newsletter, said MaryLeigh Bliss, chief content officer at Ypulse, a millennial research and marketing agency. Bliss said only 35 percent of 13- to 17-year-olds use emails, compared to 47 percent of 18- to 33-year-olds.

“Young consumers, including young girls, are ‘app jugglers’ and are always looking for something new to entertain them on their phone,” she said. “Teens are more likely to use an app than they are to check their email or go to a site.”