Brands rejoice: Instagram to begin showing the number of views a video gets

View counts are coming to Instagram videos for everyday users and advertisers.

Video counts are a fixture on Facebook, and today the sister app is rolling them out, Instagram said today. The new setting will start showing for a limited number of users and be available network-wide in the coming weeks, the company said.

A seemingly small tweak, view counts can be a kind of morale booster, according to advertisers. If a video shows off a ton of views, then it may encourage more people to give it a look, said Rah Mahtani, social media manager for Jack in the Box.

“Whenever we feature content there, it tends to see high levels of engagement. It would be amazing to show audiences how many views we’re getting,” Mahtani said. “When you see a video that has a lot of views, you just want to watch it.”

Jack in the Box is in the middle of a Facebook and Instagram ad push that includes videos on both platforms.

Instagram does not break out how many video views the platform generates daily. Only Facebook has given that number, and it’s more than 8 billion a day. In today’s announcement, the only statistic Instagram shared was that time spent watching videos has increased 40 percent in the past six months.

Mobile video has become an integral part of media consumption and advertising. All major platforms, following the rise of YouTube, are trying to become the place for brands to get creative commercial messages out as the younger generation watches less television. Snapchat, arguably the hottest app among teens and people in their 20s, generates 7 billion views a day. 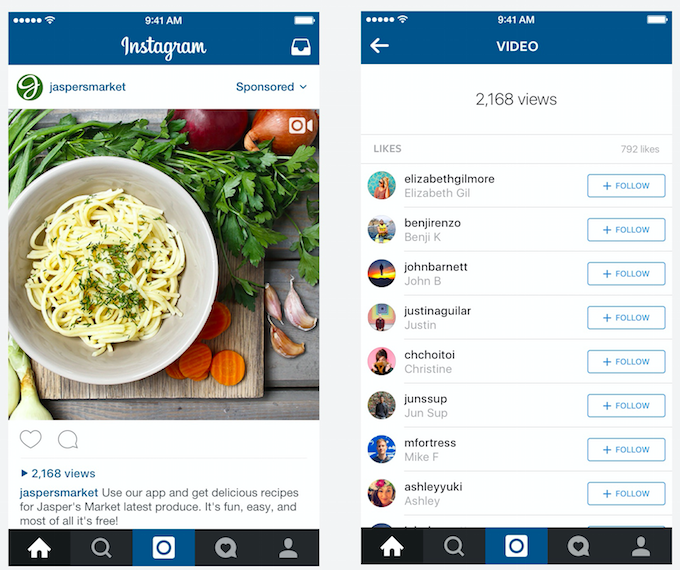 View counts were one of the most requested features from brands, according to an Instagram rep.

“Brands tend to be fairly proud of view counts,” said Chris Tuff, evp, director of business development & partnerships at 22squared. “This is just another platform evolution that Instagram is unveiling following what’s worked at Facebook.”

Displaying view counts could give brands more confidence sharing videos on Instagram, according to Jason Stein, CEO of Laundry Service. Stein had a theory that brands are favoring photos because they tend to drive more hearts their way from users.

“[View counts] should encourage people to post more videos on IG. Right now, people are a bit hesitant because they get less likes than photo posts, but that may well be because people are not able to double-tap to like on videos,” Stein said.

Of course, with any discussion of view counts, there are questions of value. Some advertisers and agencies are cautious about view counts on videos that autoplay, as they do on Facebook and Instagram. Click-to-play video views, like on YouTube, are sometimes considered more valuable, even if they don’t drive the tally as high.