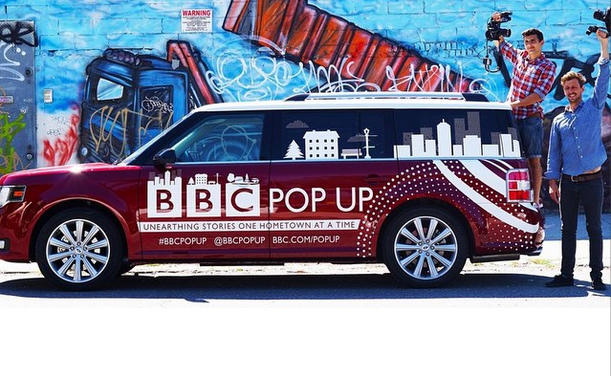 The broadcaster’s latest effort, BBC Popup, is an experiment in so-called “mobile” reporting: Rather than create a permanent local bureaus, BBC is creating temporary “pop up” offices in six U.S. cities over the next six months. The operation’s first stop is Boulder, Colorado, where the BBC has already started crowdsourcing story ideas from the local community via town hall meetings.

While the focus on local coverage isn’t a new one for local newspapers, it is a new and significant one for BBC, which, like any global news organization, is more likely to base itself out of major cities like New York and regional hubs like Chicago, as opposed to comparatively small ones like Boulder.

“We’re used to telling global stories for a global audience, but we have never based ourselves in these communities for any amount of time.” said Matt Danzico, head of BBC’s video innovation lab. “But the things we cover here all speak to larger events and appeal to our larger audiences.”

Local, however, is tough to pull off. Consider Patch, the local blog network that AOL spun off earlier this year. Despite being a valuable tool for the 900 communities using it Patch was a tough sell on the monetization side. Hyper-local news is notoriously difficult to scale, making it tough for a single large company like AOL to make the model work. Case in point: Patch didn’t report a quarterly profit until this May, seven years after it was founded.

While it’s too early to say if BBC’s hyper-local efforts will fare any better, it’s clear why the experiment makes sense. BBC, like fellow U.K. media companies The Guardian and The Daily Mail, is trying extend its brand further into the digital news consumption habits of Americans. So far, the effort hasn’t resulted in much growth. BBC gets a little over 22 million monthly desktop uniques in North America across all of its sites, which is essentially flat compared to where it was at the same time in 2011, according to comScore. Still, despite its larger digital struggles, BBC social reach is significant, particularly on Twitter, where it regularly gets more retweets than The New York Times and BuzzFeed.

BBC’s leadership is aware of its challenges. In a report on the organization’s digital future, BBC board member Sir Howard Stringer said that BBC is “punching well below its weight” when it comes to digital, and that it’s being outplayed by far younger companies like BuzzFeed and Vice.

“Given Buzzfeed, for example, was only founded in 2006, this raises the question of why the BBC’s global digital reach is not more significant,” Stringer said in the report.

The approach is similar to that of NowThis (formerly NowThis News), which has also used stackable short-form videos to address the news consumption habits of millennial news consumers. So while BBC is trying to bolster its overall American footprint, it’s also trying to specifically attract younger, more digital-savvy viewers.

Steve Goldberg, managing director at Empirical Media, said that BBC Popup is the type of innovation that’s rare among traditional media brands these days. “To see this from a non-local news organization that isn’t even U.S.-based is a tremendous rallying cry for local media companies — whether it ends up working or not,” he said.