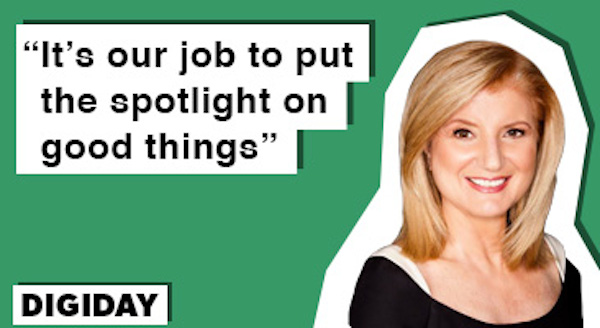 Last month The Huffington Post topped 100 million uniques for the first time ever. Arianna Huffington herself made the announcement that, according to comScore, the site racked in a whopping 115 million unique views in August. She also said HuffPost was the largest publisher on Facebook in August for the fourth month in a row.

Here’s what she had to say about the commitment to investigative as well as lifestyle stories, making online publishing profitable and the importance of “good news” to the business.

When you look at the traffic today, what are the top-performing verticals, and is the content mix where you want it to be?
From the beginning, we saw HuffPost as being a leader in terms of all the content people want. We started as a politics and news site and we started adding verticals. Politics remains the No. 1 politics site in the country, and we now have very high-performing verticals with Parents and Healthy Living, and all the content that falls under lifestyle, and it’s definitely paying off in terms of traffic and reader engagement. They attracted a new audience, and helped us with the current audience. With the international editions, we have a lot of great content translated around the world. It’s like having a global newsroom.

Some now say traffic is outdated as a metric. Does it matter as much as it used to, or are you increasingly looking at engagement?
We look at both. I don’t think there’s any publication that doesn’t look at traffic. But obviously, we look at engagement just as much, and sharing. That’s why one of the facts I shared was that we’re the biggest publisher on Facebook.

Given Facebook’s ever-changing algorithms, can you be too dependent on them?
I don’t think we’re too dependent on Facebook. It’s not like SEO. This is content our readers are really interested in sharing. It’s not smoke and mirrors. What we’re finding is, the content shared most on Facebook is the content around how people live their lives and can improve their lives. So these are real concerns of people. There’s a huge authenticity to the content.

HuffPost is still not consistently profitable. It makes one wonder, what hope is there for smaller publishers?
It depends on whether you’re taking your revenue and investing it. Our goal has been to continue investing — in HuffPost Live, in global. But we’re in a very good position and it’s going well where HuffPost is in [terms of] profitability.

You’ve put a big emphasis there on good news lately. How does that coexist with deep reporting and hard-nosed journalism?
It’s our job to put the spotlight on good things, and that has been a great source of revenue, because a lot of brands like to advertise sections around causes, whether it’s Goldman Sachs or Johnson & Johnson or Chipotle. This is very much in our DNA and is also a great revenue source. We continue to do long-form pieces, like the life of returning vets, suicide, mental health. We have a great series on student debt. We’re doing a long piece on the drug wars that’s been in the works for nine months.

Reddit accused HuffPost of using its content without attribution, which your editor denied. Does this speak to the nature of online publishing today, with the need for speed?
We absolutely did not do that. HuffPost editors are constantly trained to make sure everything they link to meets all the fair-use rules. We are doing everything to treat everything with guidelines and give benefits to the creators of the content, because we drive traffic to them, and then they can monetize the traffic.

Looking ahead, what are you going to be talking about a year from now?
Much more video — long form, short form — and much more on mobile. I hired a head of mobile, and he is already having a tremendous impact on our mobile apps and mobile Web. And then we’re doing a lot more around engagement — stories around [lifestyle content].